Chewy (CHWY 6.15%) is still in the doghouse despite posting second-quarter results that beat analysts' expectations on the top and bottom lines, and its guidance exceeding Wall Street's forecast for the full year.

Chewy's stock is down nearly 10% since the company reported earnings, and perhaps the problem is that they confirmed that growth is slowing. However, it doesn't seem like the market should have reacted so bearishly. Chewy is delivering strong customer gains and margin expansion, indicating customers still want to spend, so although it's battling Amazon.com for preeminence, it looks like the online pet supplies retailer is ably managing its expansion. 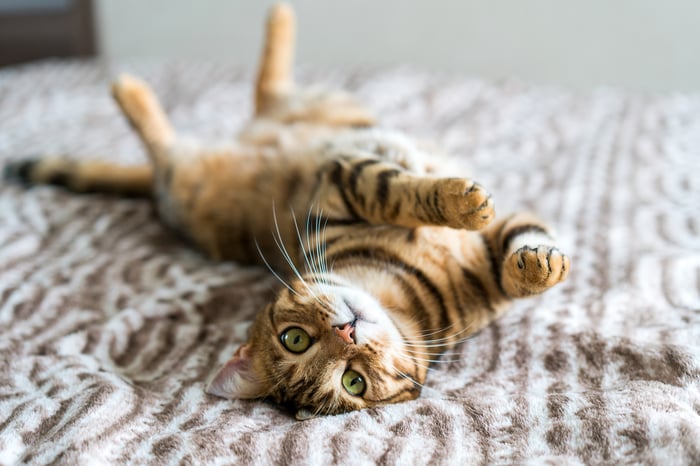 Chewy said revenue rose 43% in the quarter to $1.15 billion generating an adjusted loss before interest, tax, depreciation, and amortization of $29.2 million, which exceeded expectations of $1.13 billion and an adjusted loss of $29.8 million. Management also guided toward full-year revenue between $4.75 billion to $4.80 billion compared to a consensus forecast of $4.73 billion.

The online retailer was able to enjoy gross margin expandsion of 300 basis points in the quarter to account for 23.6% of sales while increasing the number of active customers to 12 million, a 40% gain over last year. Importantly, net sales per active customer grew 10% year over year to $352, meaning its best customers are spending more with the chain.

Sales through Chewy's autoship program also saw substantial growth, surging almost 49% to $800 million and now accounting for 69% of sales. However, this is less than it seems.

One to ignore, one to watch

Autoship, as the name suggests, automatically sends out products on a regular basis to customers, though it's mostly just food at the moment. It classifies an autoship customer as anyone enrolled in the program that's had an order ship either through the program or outside of it at any time during the preceding year.

While Chewy has been enjoying strong sales growth, autoship's squishy definition of an order makes the metric a less reliable indicator of value. That $800 million figure doesn't necessarily mean the sales were made through autoship, just that the customer was in the autoship program and placed an order with the company. Investors would probably do well to largely ignore the metric until Chewy starts detailing the true value of the autoship program.

What they might want to watch instead is Chewy's newest business: pet pharmacy.

Pet health and wellness is still in its early stages, but management has high hopes. Over 75% of pet owners have a need for a checkup for their pet, so with 12 million active customers, it ought to be able to cross-sell them on its pharmacy business or veterinary care. Though there have yet to be hard-and-fast numbers to compare, it will be an important business to watch.

Running with the big dogs now

Chewy's inadequate name recognition seems to be its biggest problem right now. Despite all the marketing it has done, it still has low levels of aided and unaided brand awareness. Although the company sees that as an opportunity to grow as more people become aware of its business, that also means marketing costs are likely to increase.

Currently, such expenses represent just 10% of sales, and they increased 24% year over year, but they may need to accelerate much faster if Chewy hopes to bring in more customers. The online pet supplies field is getting more crowded, and it will encounter greater competition as it expands its horizons, both from online and offline rivals.

With a commanding share of the online market, one equal in size to Amazon, Chewy has shown it is adept at navigating the waters so far, but it may be the next phase of growth that calls for it to enter new markets that prove more challenging.