Please ensure Javascript is enabled for purposes of website accessibility
Log In Help Join The Motley Fool
Free Article Join Over 1 Million Premium Members And Get More In-Depth Stock Guidance and Research
By Adam Levine-Weinberg – Updated Sep 19, 2019 at 8:17AM

Nordstrom stock has been gyrating wildly over the past year due to the company's volatile sales and earnings trends. But investors should be focusing on the company's long-term prospects.

Nordstrom (JWN -1.18%) stock has taken investors on a roller-coaster ride in 2019. After starting the year near $50, Nordstrom stock plummeted to a multiyear low just above the $25 mark last month.

However, the stock surged 16% on Aug. 22, the day after Nordstrom released its second-quarter earnings report -- even though the company reported a sharp sales drop. Nordstrom shares continued to rally in early September, surpassing $35 last week. The volatility has continued, though: The stock plummeted 10% on Tuesday, reversing some of its recent gains. 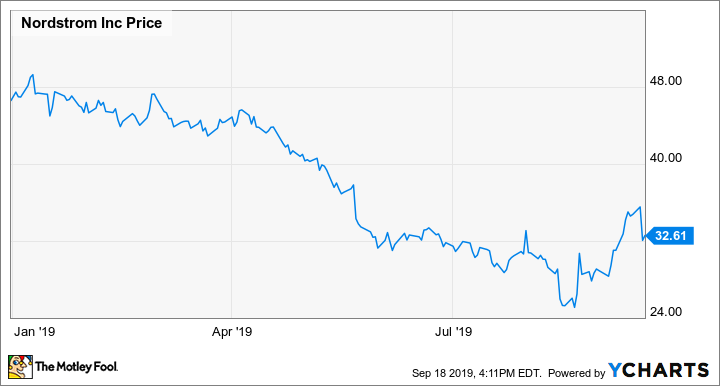 A negative report from Cleveland Research about current department store sales and traffic trends seems to have sparked the recent sell-off. Yet investors should be focused more on Nordstrom's long-term earnings and cash flow potential rather than obsessing over its short-term results as they have been doing all year.

Nordstrom is fixing its full-line business

Not surprisingly, Nordstrom's full-line segment -- which consists mainly of Nordstrom stores and the Nordstrom.com e-commerce business -- has been the main cause of the company's weak sales results recently. Total full-line sales declined 5.9% year over year in the first half of fiscal 2019. Considering the long-term headwinds assailing department stores, investors are understandably nervous that this downtrend will continue.

That said, Nordstrom has faced somewhat difficult year-over-year comparisons year to date, as its full-line segment posted a 2.6% comp sales gain in the first half of fiscal 2018. Moreover, the company has made some major execution mistakes over the past year: botching the rollout of its new loyalty program, misfiring on its merchandise selection, and reducing its digital marketing spending.

These missteps have contributed to Nordstrom's weak full-line sales this year. Fortunately, the company has been working to fix these issues for months. Management warned on the earnings call last month that investors should expect only modest improvement in sales trends this quarter. The real recovery is more likely to begin in the fourth quarter, when Nordstrom will face easier comparisons and the fixes it is implementing will have fully kicked in.

Cleveland Research analyst Rusty Wilson's prediction that total sales (including the off-price segment) will fall 3.5% in the third quarter -- missing analysts' estimates -- is fully consistent with this guidance. Thus, investors may have overreacted to his recent report.

Nordstrom's sales have been falling this year. Image source: Nordstrom.

Finally, Nordstrom is still trying to figure out what its long-term store footprint should look like. It has closed seven full-line stores in 2019 (more than 5% of its fleet), but it is also opening two new ones next month -- most notably, a large flagship store in Manhattan. Closing underperforming stores should lead to better sales trends and boost Nordstrom's profitability. Opening the new stores will also boost Nordstrom's earnings. In recent years, the company has incurred substantial pre-opening expenses for the Manhattan store in particular.

Nordstrom Rack is a solid franchise in a growth segment

Nordstrom's off-price business has also struggled this year, but there is even less reason to worry about that part of the company. Indeed, off-price retailers have been gaining market share in the U.S. for years and have substantial competitive advantages relative to department stores.

Just last year, Nordstrom posted a strong 3.5% comp sales increase in its off-price segment, with net sales reaching $5.2 billion. This suggests that there's no fundamental problem with Nordstrom Rack. As was the case in the full-price business, management has identified and started to address execution mistakes that held back Nordstrom Rack in the first half of the year.

Shares of established pure-play off-price retailers trade for roughly 1.5 times to 2.5 times sales. Even at a valuation of just one times sales, Nordstrom Rack would be worth about $5 billion -- as much as the whole company's current market cap. The long-term potential of this segment is a big reason why Nordstrom stock deserves a higher valuation.

Cash flow is set to surge

Despite its weak year-to-date sales performance, Nordstrom's free cash flow declined by just $84 million in the first half of fiscal 2019 -- and that was with a $211 million year-over-year increase in capital expenditures. Nordstrom's capex is peaking this year, due to its new full-line stores and investments in a new West Coast fulfillment center.

By contrast, capex will decline to below 2018 levels starting next year, as Nordstrom's multiyear investment cycle starts to wind down. This will cause free cash flow to rocket higher. At the company's investor day last year, management projected that free cash flow will reach $1 billion by fiscal 2022.

That estimate may be unrealistic in light of Nordstrom's recent sales downturn. But even if free cash flow reaches only $800 million, it would make Nordstrom stock a steal based on the company's current market cap of $5 billion. The company plans to return all of its free cash flow to shareholders in the coming years. So while Nordstrom may be struggling right now, long-term investors don't have much reason to worry.