Please ensure Javascript is enabled for purposes of website accessibility
Log In Help Join The Motley Fool
Free Article Join Over 1 Million Premium Members And Get More In-Depth Stock Guidance and Research
By Herve Blandin – Sep 19, 2019 at 9:21AM

Profits are declining because of the overcapacity in the European airline market. And despite some other challenges, the situation will become favorable to Ryanair.

If you're a long-term investor, you're not short of reasons to avoid the commodity-type and capital-intensive airline sector Warren Buffett once qualified as a "death trap". Ryanair (RYAAY -2.56%), the top European carrier by passengers, is experiencing the typical industry challenges. Because of the current airline overcapacity in Europe, fares are declining, and higher costs are hurting its profits, while other events such as the delays with the delivery of Boeing 737 MAX planes will impact the company over the medium term. But Ryanair's current challenges actually create a long-term investment opportunity. 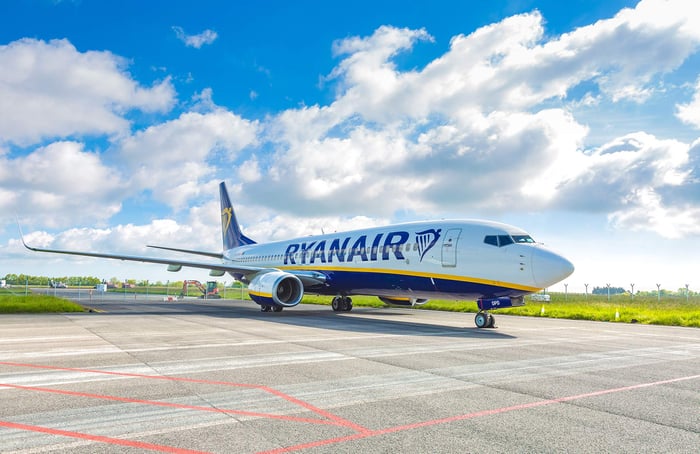 Overcapacity and bankruptcies in the European market

Oversupply in the European airline market translates into lower prices. During the last quarter, Ryanair reported a drop in its average fare by 6%, and the trend isn't specific to Ryanair. Its low-cost competitor easyJet (LSE:EZJ) expects revenue per seat to decrease over the next months.

Bankruptcies are the consequence of such a challenging market. Earlier this year, Iceland's airline Wow Air shut down. And during the last earnings call, Ryanair's management said it would expect more European airline failures during the second half of the year. This forecast didn't take long to materialize as the second biggest French carrier Aigle Azur confirmed bankruptcy filing at the beginning of September. Norwegian Air, another low-cost European airline, is in a similarly challenging situation. Because of its debt load, its bondholders accepted a debt relief plan a few days ago.

But Ryanair is actually likely to take advantage of this situation. The company's lower fares contributed to a 21% decline in its profit during the last quarter. But thanks to its low-cost structure, profit after tax was still positive at 242.9 million euros (roughly $268 million). And the company isn't under the pressure of a debt threat. Thanks to its positive free cash flow and despite its share buyback program, its net debt decreased quarter over quarter from 449.5 million euros ($496.4 million) to 419.3 million euro ($463 million). In contrast, Norwegian Air's net debt amounts to about $3.7 billion, while the company reported a loss of $157 million during the first half of the year.

Thus, Ryanair can afford to be patient and generate profits while bankruptcies and troubled companies will contribute to the elimination of oversupply. And when overcapacity diminishes, fares and profits are likely to improve.

The impact of higher oil prices

While oversupply constitutes a long-term opportunity for Ryanair, other events seem more threatening. The surge in oil prices following a drone attack on Saudi Arabian oil facilities was a negative outcome for airlines.

Fuel and oil represent the highest costs, by far, for European carriers. For instance, during the last quarter, Ryanair's fuel and oil amounted to 33.9% of revenue, while the second-highest expense (airport and handling charges) represented only 14.1% of revenue. In comparison, easyJet and Norwegian Air reported fuel and oil costs at 25.7% and 31.2% of their revenue, respectively, during the last two quarters. Norwegian Air's second-highest expense (personnel) reached only 16.9% of revenue.

But again, Ryanair is poised to profit from the situation as higher oil prices will accelerate bankruptcies. During its most recent earnings call, management highlighted that 90% of the company's oil consumption was hedged over the next 12 months. Thus, Ryanair is immune to the medium-term volatility of oil prices while other companies took more risks. Norwegian Air, for instance, hedged only 38% of its full-year oil consumption.

Ryanair is also exposed to other threats, like the unknown outcome of Brexit and the uncertainties around the delivery of new Boeing 737 MAX planes. But the situation with the U.K. isn't specific to Ryanair, and the delay with the new airplanes is a temporary issue. Management still expects to grow the number of passengers from this year's projected 152 million to 200 million in 2024.

The market has taken into account the short-term negative developments; Ryanair's stock price on U.S. exchanges dropped by 36% over the last 12 months.P/E ratio, currently at 14, is reasonable considering that the company is poised to take advantage of the current challenges in the industry to grow its profits over the long term.

The European airline sector is experiencing the consequences of a challenging environment. Because of overcapacity, fares are getting lower. And volatile oil prices mixed with high debt levels are likely to trigger extra bankruptcies over the short term.

Ryanair is in a good position to take advantage of these issues, though. Other European airline bankruptciesare reducing overcapacity, while the company is still generating profits. Besides, Ryanair's net debt is low, and management's prudent oil hedging eliminates exposure to volatile oil prices.

Thus, Ryanair is an interesting opportunity for long-term investors. The valuation is reasonable, while the company looks poised to grow thanks to its structural advantages.

Hertz and BP Partner to Install Thousands of EV Chargers; Gov't Funds Its Own Network

Wall Street's WhatsApp Habit Could Cost it $2 Billion in Penalties

Brussels Seeks to Clamp Down on Defectors