The online ticketing specialist moves lower in its first year of trading. The future could and should be louder and brighter.

Friday is the one-year anniversary of Eventbrite's (EB 2.71%) IPO, and like many of the events that the online ticketing specialist helps book, there have been highs and lows. Eventbrite went public at $23 on Sept. 20, 2018, and here we are -- a year later -- with the stock blowing out the birthday candle priced in the high teens.

Investing in IPOs is risky, but this has been a round trip to worse than nowhere. Eventbrite is a broken IPO, having shed more than half of its value since peaking north of $40 just days after its Wall Street debut. There's been a little bit of everything in the stock's fadeout. Decelerating revenue growth, a financial hit following the cancellation of a music festival, and larger than expected losses in three of its first four quarters as a public company have kept the stock down. Let's go over the things that have to happen for Eventbrite to pump up the volume in its sophomore year. 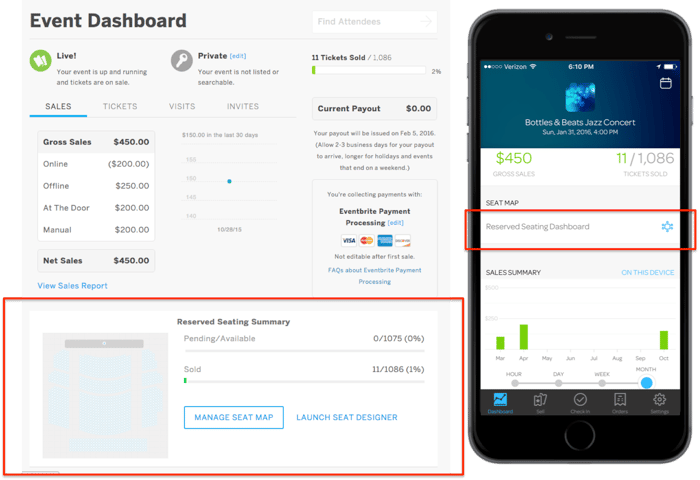 A smattering of applause

Business is slowing at Eventbrite. Revenue is expected to rise by 1% to 6% for the current quarter, a far cry from the e-ticketer's 51% top-line surge in 2017 and 45% pop last year. One factor weighing on the sharp deceleration is the acquisition of Ticketfly two summers ago, a deal that not only padded earlier growth but will hold revenue back this quarter as the platform gets officially migrated into Eventbrite's namesake hub.

The $74 million to $78 million in revenue that Eventbrite is modeling for the three-month period is less than the $80.8 million that it rang up in the second quarter of this year. There may be seasonality to event registrations, but that hasn't historically been the case for Eventbrite. It has posted sequential increases between the second and third quarter in each of the two previous years.

There's another feathered excuse in Eventbrite's quiver as it explains away the weak guidance for the quarter ending later this month. The Roxodus Music Festival in Canada was cancelled at the last second this summer, and Eventbrite decided to shell out $4 million in refunds when promoters balked. The problem here is that despite all of the headwinds for the current quarter, analysts see revenue slowing yet again to a 2% clip in the fourth quarter. Did I mention a CFO switch this summer?

Things can and should get better next year. Eventbrite isn't going away; it continues to be the platform of choice for small and sometimes large events that require ticketing or registration. Eventbrite helped organizers distribute 265 million tickets across nearly 4 million site-listed events last year. Only a third of those were paid tickets, but there's value in the freeloaders, too, as that platform's popularity expands.

Eventbrite hasn't offered up guidance for 2020, but analysts see a return to double-digit growth after a lackluster second half of this year. Analysts are forecasting narrowing losses on a nearly 15% jump in revenue.   .