Will iPhone revenue decline again during the current quarter?

This time last year, Apple (AAPL -1.26%) was seeing strong top-line momentum. The company had seen its year-over-year growth rate for total revenue accelerate for seven quarters in a row -- and it was about to wrap up what would be its eighth consecutive quarter of accelerating growth.

While Apple's services and wearables segments were growing rapidly then, as they are now, the big difference between the tech giant then and now was its rapidly rising iPhone revenue. The company's smartphone revenue soared 20% year over year in the third quarter of fiscal 2018 and accelerated to 29% growth in fiscal Q4. In the three quarters to follow these periods, however, iPhone revenue has been falling.

But what can investors expect from iPhone in the current quarter? Will iPhone revenue fall yet again? 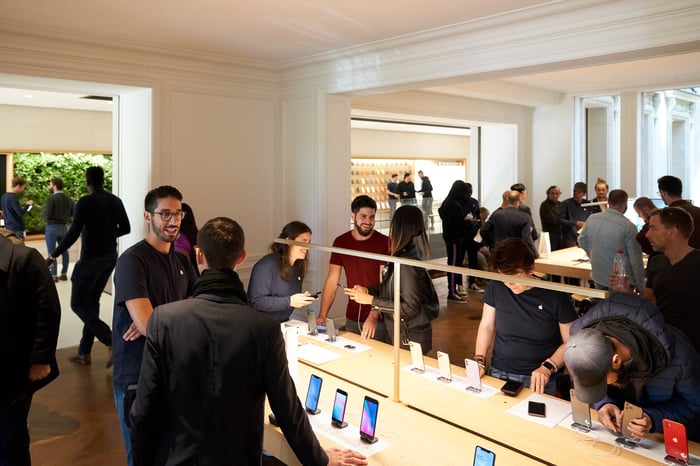 While the iPhone segment has been in decline for the past three quarters, they have been moderating. In the fiscal third quarter of 2019, for instance, iPhone revenue was down 12% year over year -- an improvement from a 17% drop in fiscal Q2.

Importantly, when combining this moderating decline in the iPhone business with the tech company's strong performance in its four other segments during its fiscal third quarter, Apple was able to return to consolidated top-line growth. Total revenue rose 1% year over year during the period.

For Apple's fiscal fourth quarter, the iPhone segment will likely decline again. In addition, it could be similar to what was seen in fiscal Q3 -- at least this is what Apple's guidance for fiscal fourth-quarter revenue suggests will play out. With iPhone typically accounting for well over half of the company's revenue, Apple's guidance for total revenue often provides a window into what management expects from its smartphone segment.

Management guided for revenue in its fiscal fourth quarter to be between $61 billion and $64 billion. The midpoint of this guidance range implies a 0.6% year-over-year reduction in total revenue. But if Apple's revenue comes in toward the high end of its guidance range, as it often does, this would put total revenue growth at a similar rate to what was seen in fiscal Q3. Since Apple has seen strong momentum in its other segments, iPhone revenue would likely have to slump once again for its consolidated revenue growth during the period to be similar to what it was in fiscal Q3.

Of course, when Apple reports its fiscal fourth-quarter results, investors may be more focused on looking for signs of what to expect from iPhone in the first quarter of fiscal 2020 than they are on Q4's iPhone revenue. With less than two weeks left in its fiscal fourth quarter, Apple just launched a new lineup of iPhones. Fiscal Q1, therefore, will be the first full quarter of these new phones' availability. Will Apple guide for strong total revenue growth in fiscal Q1? If it does, this will suggest initial sales of the latest iPhones are going well. Furthermore, it would imply that the iPhone business could return to growth in fiscal 2020.