Please ensure Javascript is enabled for purposes of website accessibility
Log In Help Join The Motley Fool
Free Article Join Over 1 Million Premium Members And Get More In-Depth Stock Guidance and Research
By Justin Cardwell - Sep 20, 2019 at 10:24AM

People are ditching cable at high rates. Here's one stock I think is a backdoor play into the streaming TV market.

Known for the infamous Mr. Potato Head, Hasbro (HAS -2.37%) has been a toy and game pinnacle from its founding in 1923. After 96 years in business, Hasbro has maintained a top position in the toy segment, among competitors such as Mattel (MAT -0.47%) and The Lego Group. The Toys "R" Us bankruptcy in 2018 had a systemic impact across the toy industry, however, I believe Hasbro is outmaneuvering the gap in sales, positioning itself for success in the long run. 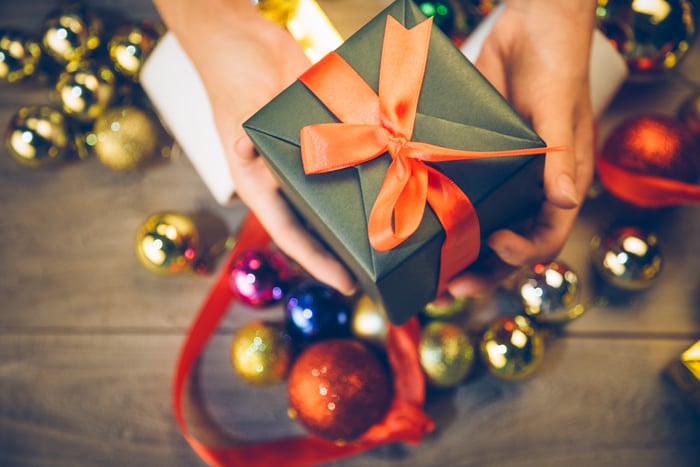 Optimism is in the air

Heading into the holidays, there is an increasing conversation around the strength of sales during the 2019 season. As unemployment has been historically low with growth in wages and spending, it isn't outlandish to assume this holiday season will be above average. Overall spending is expected to be positive, with a projected 2019 increase of 4.5% per the report by The Department of Energy.

Giving strength to this estimation, consumer sentiment is expected to remain positive through the end of 2019. As a leading indicator of the consumer's confidence in the economy, consumer sentiment is a good predictor to use when forecasting spending. It was reported in August tariffs created a negative impact upon sentiment, dropping 8.6 points. As the U.S. and China are coming to the table to discuss a deal, there could be a recovery in sentiment, confirming the strength in consumer spending this season.

Hasbro has a new superpower

Hasbro recently acquired Entertainment One for $4 billion, which will add additional growth to the bottom line. As the creator of Peppa Pig, Entertainment One will give Hasbro access to a $2 billion content library, including over 80,000 hours of movies and TV shows, and 40,000 music tracks. Armed with the library and tools of Entertainment One, Hasbro can roll out its own streaming service, or license to other services such as Netflix or Disney, combining the best of both companies. This acquisition should bolster Hasbro's revenue as Entertainment One is expected to grow by 10% in 2019. Hasbro expects additional benefits in the form of synergies -- fancy word for cost savings -- of $130 million by 2022.

Most of Hasbro's revenue is generated by the franchise segment, up 14% in the second quarter of 2019 from $507 million in 2018 to $577 million in 2019. The growth was primarily generated in this segment from sales of Monopoly, Magic: The Gathering, and Play-Doh. In addition, emerging brands such as the Power Rangers, FurReal Friends, Playskool, and Mr. Potato Head are up 28% year over year from the second quarter of 2018 to 2019. To increase revenues generated from Magic: The Gathering, Hasbro has teamed up with Netflix to create an animated series dedicated to promoting and building upon the game.

In addition, Hasbro has exclusive rights to make toys and products for Marvel. Acquired by Disney in 2009, Marvel has given Hasbro an expanded reach of the popular Avengers series, Star-Wars, and Spiderman to name a few. These brands bring blockbuster revenue potential and contain massive fan bases for Hasbro to leverage into profit.

In comparison to Hasbro's peers, Mattel is closest in both value and size. Hasbro's revenue during the trailing twelve months (TTM) was $4.68 billion while Mattel was $4.51 billion. Earnings before interest, taxes, depreciation, and amortization (EBITDA) was $801 million for Hasbro and $351 million for Mattel. Comparing similar revenues while having a variance of $450 million EBITDA shows Hasbro wins by a wide margin.

The largest impact on Hasbro and Mattel's revenues has been the closure of Toys "R" Us in 2018. Even as Hasbro has sidestepped the revenue loss, it has been announced by the former chief merchant for Toys "R" Us, Richard Barry, the store will be opening with a redesign and freshened concept. New stores are expected to be less than 10,000 square feet and provide experiences to consumers as well as products. Toys "R" Us was generating around $7 billion in revenue for the toy industry, and the closure left a gaping hole to fill by other retailers such as Amazon and Wal-Mart. If the revamp of Toys "R" Us becomes a reality, Hasbro can benefit from the expanded reach to consumers.

Overall, Hasbro is positioned for success looking forward. There are many reasons to own Hasbro which include product innovation, retail partnerships, the acquisition of Entertainment One, and an increasing return on the current product portfolio. Building multiple streams of revenue has increased Hasbro's diversification across several consumer markets. By investing in Hasbro, investors will see a positive return on investment, in the long run, assuming spending is strong, and Hasbro maintains focus on current and upcoming product offerings.