Both Vertex and Merck dominate their respective segments of the pharmaceutical market.

The pharmaceutical industry is important for one simple reason: we are all, at some point, in need of medical treatment, and the amount of money that is spent on drugs continues to increase. Until we stumble upon a way to eradicate illnesses altogether, that isn't going to change. Though we can't escape from this sad reality, we may profit from it by investing in pharmaceutical companies that develop state of the art prescription drugs. Obviously, there are dozens of pharma stocks to choose from, but two that I think present particularly strong prospects are Vertex Pharmaceuticals (VRTX 2.73%) and Merck (MRK 1.66%). 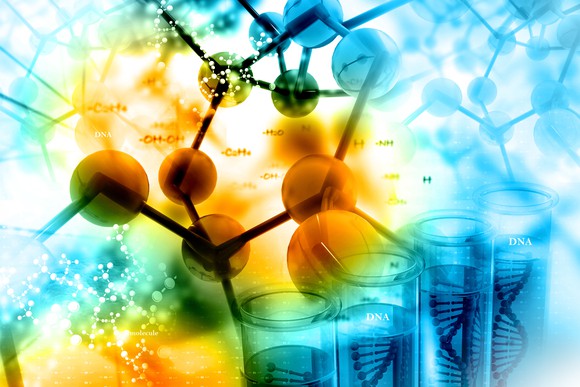 Vertex' annual revenues have increased by more than 400% since 2014. Over the same period, the firm turned a net loss of $739 million to a profit of over $2 billion, and its share price grew by about 130%.

This performance can be attributed to its monopoly on the market for drugs that treat cystic fibrosis (CF). The rare genetic condition affects upward of 75,000 people worldwide, according to some estimates.

All of Vertex' approved drugs -- Kalydeco, Orkambi, and Symdeko -- treat the underlying causes of CF. Unfortunately, all three drugs are limited in their scope to treat the rare lung disease. As we speak, only about 39,000 of those living with CF are eligible for one of Vertex' drugs, and the number of patients actually taking these medicines is likely a lot lower. There is some good news, though. Back in May, the pharma company announced positive results from a Phase 3 study for a trio of new drugs that could treat up to 90% of patients with CF.

Vertex' application for these drugs -- VX-445, Tezacaftor, and Ivacaftor -- will likely receive approval from the FDA by early 2020. This new development could help the firm sustain strong top line growth as the market for its drugs expands substantially. Further, Vertex is looking for ways to diversify its product offerings. The company's pipeline includes various pain medications, and a treatment for alpha-1 antitrypsin deficiency, a condition that raises the risk for lung disease. Finally, Vertex recently acquired privately held biotech company Semma Therapeutics with the ambitious goal of finding a cure for type 1 diabetes. Of course, there is no guarantee that this partnership will produce anything fruitful, but if it does, Vertex would reap the benefits for many years to come.

What's more, there are still dozens of clinical trials involving Keytruda, which means the cancer drug has a bright future ahead. Sales of Keytruda have increased by more than 5000% since 2014. After ranking third on the list of world's top selling drugs last year, Keytruda is projected to take the top spot by 2024 as the current top selling medicine -- AbbVie's (ABBV 3.06%) Humira -- faces stiff competition from biosimilars in Europe.

Though Keytruda makes up the lion's share of Merck's revenues, the firm has other products to rely on. In particular, Merck's vaccines business is booming. The company's Gardasil and Gardasil 9 -- which prevent certain cancers and other diseases caused by HPV -- saw their combined second quarter sales soar by 46% year-over-year. Merck's package of several vaccines that help prevent diseases such as measles, mumps, rubella, chickenpox, and varicella also grew by 58% compared to the previous year.

Lastly, Merck has several ongoing partnerships with other pharma companies. Last year, the FDA approved Lynparza, a treatment for ovarian cancer and breast cancer Merck markets with AstraZeneca (AZN 1.29%). The potential clientele for this medicine is vast, and it could help Merck decrease its top line exposure to Keytruda.

Vertex' hold on the market for drugs that treat CF will likely continue pushing its earnings upward, especially considering the market for its medicines will become much larger. Meanwhile, Merck's Keytruda is on pace to become the world's best selling drug by 2024. While both companies could run into problems if their top selling products start encountering strong competition, the near to mid-term landscape looks relatively bright for these pharma stocks.