After an inconsistent history of making games related to the hit franchise, EA may finally have the right formula with the upcoming "Star Wars: Fallen Order."

Video game adaptations of popular movies have been an industry staple going back to the glory days of the original Nintendo game console in the 1980s. Licensing third-party content to make a video game doesn't generate as much profit for a game company as original content, since the game maker has to pay licensing fees and perhaps other royalties back to the owner of the content. But licensed video games are generally a safe bet; a game based on Spider-Man, for example, already has a built-in audience of millions ready to open their wallets when the game is released. Licensed games take a lot of the risk out of designing new games from scratch.

Star Wars is probably the holy grail of licensed content in the video game industry, given the history and iconic status of the characters who have appealed to fans around the world. In 2013, shortly after its deal to acquire Lucasfilm, Walt Disney (DIS 2.38%) signed a licensing agreement with Electronic Arts (EA 2.98%) to give the game maker the exclusive right to make Star Wars-branded video games. Gamers instantly had visions of a possible sequel to one of the best video games ever made, which just happens to be a Star Wars game -- Star Wars: Knights of the Old Republic (2003), which was made by BioWare, a studio now under EA's corporate umbrella. 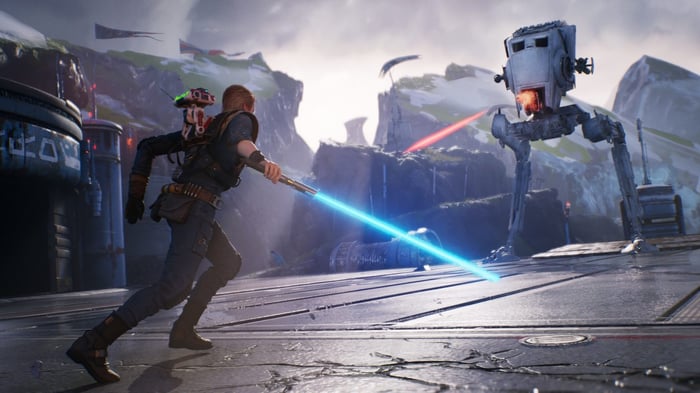 It's been six years, and the Star Wars license hasn't totally lived up to its potential. EA has canceled at least one Star Wars project. When it tried to tap the popularity of first-person shooters with Star Wars: Battlefront (2015), and its poorly received sequel, Star Wars: Battlefront 2 (2017), both Battlefront games received mediocre reviews. The two titles sold over 20 million copies combined in the quarter of their release. Yet both failed to deliver the depth of experience gamers expect from the infinitely complex Star Wars universe -- a galactic struggle that has spanned three film trilogies, countless books, and several video games over the years.

EA's latest shot at making a Star Wars game comes in November, when Star Wars: Fallen Order will release. While the early hands-on reviews reveal that there are still unanswered questions about how good the final version will be, the consensus indicates that Fallen Order could be the kind of experience fans have been craving. One analyst has already crunched some numbers and sees preorders trending toward a strong seller. It certainly helps that Fallen Order lets players live out a Jedi fantasy in a single-player story mode, an experience that should mesh perfectly with the upcoming theatrical release of Star Wars: The Rise of Skywalker.

EA's Respawn Entertainment -- a studio that EA acquired for $455 million in 2017 -- has been working on Star Wars: Fallen Order since 2014. EA has taken a much different approach with this Star Wars game than with the Battlefront games.

The obvious difference is that Fallen Order is not a first-person shooter like Battlefront, but an action-adventure game that lets the player control a lightsaber-wielding young Jedi. The Battlefront games were primarily focused on multiplayer competition and selling add-on content via microtransactions. Fallen Order is a single-player experience only, which should be a breath of fresh air for many Battlefront players who got frustrated with the pay-to-win fiasco of Battlefront 2.

The most important change is that Respawn brought in Stig Asmussen -- the creative director of God of War 3, and art director for previous God of War games -- to lead the Fallen Order project. The God of War series is considered a classic, with the first three installments receiving high Metacritic scores while Asmussen was at Sony's Santa Monica Studio, the developer behind the God of War franchise. As the Fallen Order project moved along, Asmussen brought in more of the Santa Monica Studio designers who worked on God of War, and this has gamers very hopeful that EA will finally deliver a great Star Wars experience.

Star Wars: Fallen Order got a warm reception at E3 (Electronic Entertainment Expo) in June: The game received 45 award nominations. The demo of the game at E3, coupled with the knowledge that a highly respected design team was behind the game's development, means there are high expectations building for the November release.

Based on preorder research, an analyst with Cowen estimates the game will sell between 12 million to 13 million copies this holiday, well ahead of Battlefront 2's 9 million copies sold during the fiscal third quarter of 2018. What's more, this analyst believes that preorders are trending above what's implied in management's guidance.

Two important factors that could lead to strong sales of EA's new Star Wars game are the expected high interest in the new Star Wars TV shows, expected to release on Disney+ in November, and the highly anticipated Star Wars: The Rise of Skywalker, hitting theaters on Dec. 20.

Of course, we don't know how well a game will sell until it actually releases, but the early indicators are pointing in a positive direction for EA. Growth stocks are sometimes volatile, and shares of EA are no exception, with the share price down 14% over the last year. But strong sales of Star Wars: Fallen Order could be the catalyst that gets the stock out of its current rut.