Please ensure Javascript is enabled for purposes of website accessibility
Log In Help Join The Motley Fool
Free Article Join Over 1 Million Premium Members And Get More In-Depth Stock Guidance and Research
By Travis Hoium – Sep 21, 2019 at 7:30AM

There's money to be made in energy storage.

Energy storage is becoming a hot product in corporate energy procurement, with everything from solar paired with energy storage to stand-alone storage systems on companies' wish lists. The market is still small, but it's growing quickly, and as companies consider their procurement plans for the future, we should see more growth in 2019 and beyond.

As much as energy storage may be important for making large amounts of renewable energy work effectively in the grid, the reason companies are investing in energy storage is all about the bottom line. There's real financial justification for energy storage, and that's what keeps the business going. 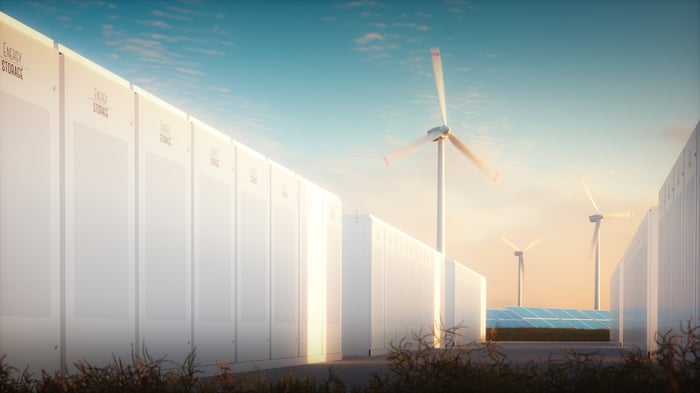 These aren't the only ways energy storage can add value to companies or the grid, but they show the biggest selling points. When corporations are looking at their energy needs, energy storage can be a lot more appealing when you consider the cost savings, revenue potential, and value in backup power.

Who's making money off energy storage?

How do investors capitalize on the energy storage growth trend? Battery makers are in a tough position because they are in a commodity business and rarely develop energy storage projects themselves. LG Chem (NASDAQOTH: LGCLF) is one of the largest battery manufacturers for energy storage, but it still only holds a fraction of the market. And it relies on third parties to install and control the energy storage system.

Tesla is another leader in energy storage and may be playing more of a supply role than SunPower. It's the battery manufacturer at the Gigafactory, and it's selling Powerpacks to commercial buildings, often through projects developed by someone else. But it has the scale to make this a very big business going forward.

Most of the other companies in energy storage are private, like Stem and Sonnen, who have built large energy storage businesses. But they haven't hit public markets, and we don't yet know if they're making money on commercial energy storage.

The size of the energy storage market

In the U.S., energy storage installations were 311 MW and 777 megawatt-hours in 2018, up from virtually nothing just six years ago. About a third of the installations so far in 2018 are commercial storage projects, and the segment has shown more stable installation trends than residential or utility-scale storage.

Still, the industry is just getting started, and Wood Mackenzie and the Energy Storage Association's analysts expect total MW hours deployed to grow nearly 14 times in the next five years. Commercial energy storage will be a big piece of that growth, so you can see why companies are so excited about it.