Since joining Chipotle Mexican Grill (NYSE:CMG) in early 2018, CEO Brian Niccol has made menu innovation and more aggressive marketing the centerpieces of his turnaround plan for the fast-casual chain. The results have been impressive so far. Chipotle's comp sales growth has accelerated dramatically during Niccol's tenure, culminating in a 10% year-over-year increase in the first half of 2019.

That said, Chipotle's average sales per restaurant and earnings remain well below 2014-2015 peak levels. On the flip side, menu changes haven't had much of a chance to boost Chipotle's results thus far, because of Niccol's (wise) insistence on thoroughly testing potential new menu items before launching them.

However, last week, Chipotle introduced carne asada as a new limited-time protein option. This could be the first of many menu innovations that may enable the company to maintain its recent sales momentum.

On Chipotle's most recent earnings call, Niccol told investors that the company was close to completing validation of carne asada as a new menu item. He noted that this new steak variant was easy to add into the existing assembly line setup in Chipotle restaurants and that it was a hit with customers in test markets.

Chipotle formally announced last Tuesday that it would add carne asada to the menu for a limited time, beginning on Thursday. The new menu item differs from the chain's existing steak option in that it is seasoned with fresh lime juice and cilantro. Chipotle is supporting the launch of carne asada with an ad campaign highlighting the process of creating this new protein option.

Carne asada is Chipotle's second major limited-time menu item since Niccol took the helm. The company also brought back chorizo for a limited time about a year ago. During the Q2 earnings call, Niccol hinted that several other potential menu additions were being tested, including quesadillas. However, the quesadillas are more difficult to execute in Chipotle's current format -- Chipotle has had to introduce ovens in its test stores -- and the company is still trying to perfect the cooking process to ensure that service remains quick. 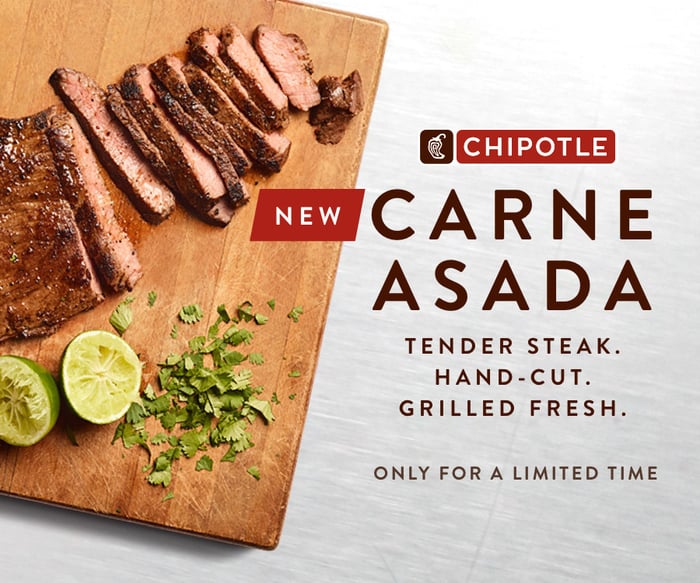 Under founder and former CEO Steve Ells, Chipotle took a strong stance against using limited-time offers to drive traffic. Ells and his team believed that simplicity and consistency were the keys to success.

Indeed, back in 2015, Mark Crumpacker -- then Chipotle's marketing chief -- castigated traditional fast-food brands for relying on limited-time offers, new menu items, and discounts to drive traffic. He claimed that while these moves might boost traffic in the short run, they don't create loyal repeat customers. Moreover, Crumpacker argued that the need to routinely add new items to drive sales led to bloated menus, driving up costs, snarling operations, and confusing customers -- which could ultimately hurt sales.

That's why the recent launch of carne asada is such an important milestone for Chipotle. While Chipotle's prior management team correctly identified the risk of relying heavily on promos and new items to drive sales, the chain's small, never-changing menu seemed to be causing "menu fatigue" among some customers in recent years. In other words, diners were getting bored with Chipotle's classic offerings and wanted new choices. That made menu innovation a necessity.

Under Niccol's leadership, Chipotle has backed away from its extreme stance against new menu items and limited-time offers. However, it has done so in a thoughtful way. Rather than flooding its restaurants with new items, the company has been testing numerous potential options, and it is now starting to roll them out after ensuring that they won't slow service or lead to a decrease in food quality.

Ideally, this will allow Chipotle to gradually reshape its menu over the coming years to keep customers coming back -- and to acquire new ones -- while keeping the menu simple enough for its staff to execute efficiently. The downside is minimal, because of Chipotle's rigorous testing process for new items, which management has said may take up to three years in some cases. Moreover, one thing is clear: Chipotle had to try something new to break out of the slump that decimated its sales and earnings between late 2015 and 2017.