Please ensure Javascript is enabled for purposes of website accessibility
Log In Help Join The Motley Fool
Free Article Join Over 1 Million Premium Members And Get More In-Depth Stock Guidance and Research
By John Ballard – Sep 24, 2019 at 7:31AM

These sellers of oil, underwear, and air travel can pad the income in your brokerage account.

Growth stocks have performed very well for investors over the last decade, but that has left many slower-growing household names in energy, apparel, and transportation trading at cheap valuations. Three stocks that investors seem to be overlooking are ExxonMobil (XOM 4.72%), Hanesbrands (HBI 3.52%), and Delta Air Lines (DAL 0.94%).

All three companies pay above-average dividend yields and generate plenty of profit to finance further increases in the payout. Here's why you should buy them today. 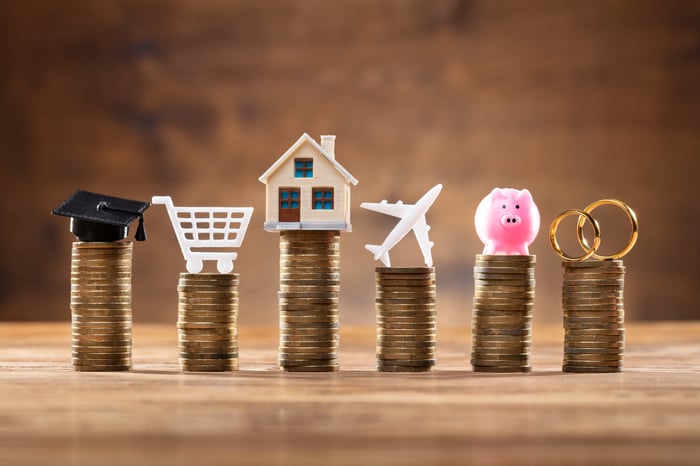 ExxonMobil has been a rewarding investment for several decades, but the current bout of low oil prices has weighed on the stock's performance. It's tough to grow profits when energy prices are down, but the company has been dealing with the ups and downs in oil prices for more than a century.

Despite the tough environment, the company still pumps out more than $30 billion annually in cash from operations and nearly $20 billion in net income. That's enough to reinvest for growth and pay dividends. Exxon's consistent profitability over the past century has allowed it to pay a dividend every year since 1911 -- a true Dividend King.

Even though earnings are pressured right now due to low oil prices, investors still place a high value on the stock, with the trailing price-to-earnings (P/E) ratio at 17.4. That valuation implies that investors expect ExxonMobil to return to growth, and there are good reasons it will.

The oil giant has made substantial investments in the Permian Basin, which resulted in an increase in upstream liquids production of 8% in the second quarter. Also, investments to support growth in the chemicals business are expected to pay off in the next few years. These are just a few of the initiatives the company is pursuing to meet the growing need for energy. The world's population is expected to increase by 20% in the next two decades, creating a proportional increase in demand for more fossil fuels.

Management expects earnings to nearly double by 2025, which assumes no increase in oil prices. The company is also targeting about $15 billion in asset sales to reallocate resources toward the projects with the best returns.

The stock currently pays a dividend yield of 4.57%. The payout ratio is relatively high at 80%, but expected earnings growth should support rising dividend payments, just as ExxonMobil has managed to do for 108 years.

Hanesbrands is a sleeper stock in the apparel industry. The company's Champion apparel brand has been a hot shopping item for young people over the last year. Its sales soared more than 50% last quarter, excluding sales to mass channels like big-box retailers. The long-term growth opportunity of this brand is significant: Hanesbrands currently pays a mouth-watering dividend yield of 4.14%.

On top of a high yield, the stock could be severely undervalued, as it trades at an ultra-low forward P/E of just 8.26 times next year's earnings estimate. The reason is that sales of socks and underwear (63% of total sales) have been weak, and that's not because fewer people are wearing any. The weakness is mainly due to a challenging retail environment, with retail store closures and major retailers investing in private-label brands. But management is directing investment toward innovation and revitalizing the bra category, which contributed to a sequential improvement in innerwear sales last quarter and should get the segment back to sustainable growth.

Meanwhile, Champion is on pace to reach $2 billion in annual sales in the next few years, or nearly a third of total sales, and management sees a path to reach $3 billion down the road. A combination of opening Champion-branded stores and growing online sales should maintain the brand's momentum.

Because the stock's valuation is so cheap, Hanesbrands offers a high dividend yield even though the payout ratio is just 39%. Investors can own a piece of one of the hottest streetwear brands while padding their annual income.

Airline stocks have delivered monstrous gains in recent years. Gone are the days of high operating costs and no profit to service high debt burdens. Failure to do that led to a wave of bankruptcies several years ago, but Delta Air Lines is proof that old dogs can learn new tricks.

Since 2011, Delta's earnings have climbed 570%, fueling a 625% rise in the stock price. The stock is still cheap even though management is guiding for more growth, which could pave the way for further share price gains.

The stock trades for 7.85 times next year's earnings estimate and offers a dividend yield of 2.39%. The payout ratio is just 21%, which means a combination of further earnings growth and an increase in the payout could make Delta Air Lines a great income investment. The dividend has increased every year since 2013. Recently, the company raised the quarterly payout by 15% to $0.4025 per share.

Management is calling for $4 billion in free cash flow this year, out of which they plan to return $3 billion to shareholders via share repurchases and dividends. During the second-quarter earnings report, the company raised its full-year outlook based on strong performance through the first half of the year. Earnings are now expected to increase by 25% over 2018.

Delta has a valuable brand, a valuable loyalty program with American Express, and a stream of free cash flow to power the stock and dividend higher.