What does the future hold for this marijuana giant now that its share price has fallen in recent weeks?

The past couple of months have seen some of Wall Street's top cannabis stocks fall from grace. Perhaps the first company to come to mind is Canopy Growth, the world's biggest pot stock by market cap, which saw its shares decline substantially when it reported a surprising $1 billion financial loss in its recent quarterly results . Investors quickly began to fear that other well-established cannabis stocks could witness a similar decline in the weeks to come.

That's exactly what has happened with Aurora Cannabis (ACB 1.20%). In its recent financial results, the company not only failed to see a profit once again but also warned investors that it likely won't be profitable until 2020 , which was a major disappointment to analysts and investors alike.

With share prices falling in light of this news and once-optimistic analysts now changing their ratings on Aurora Cannabis, investors are asking whether this is a good buying opportunity or a reflection of a deeper problem in the cannabis industry. 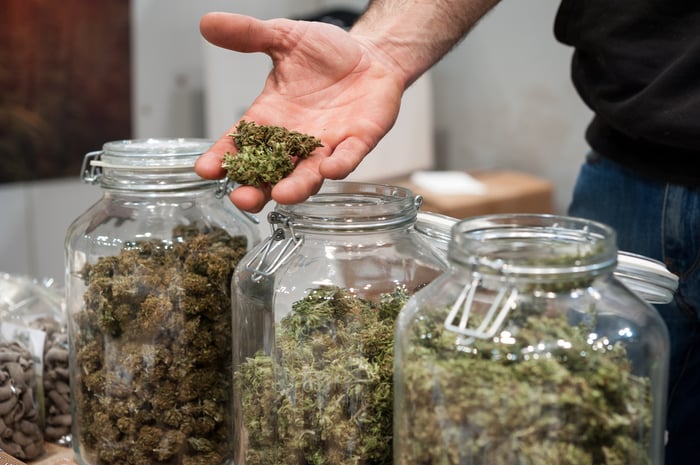 Despite selling more cannabis in Canada than its rival Canopy did during the quarter and growing its revenues by 52% from the previous quarter, Aurora Cannabis ended up embarrassing itself when its revenue figures still missed its own unaudited guidance it had released just a month prior. The company sold $43 million worth of cannabis in the adult market compared to the $30 million reported last quarter . However, Aurora Cannabis wasn't able to sell all of this pot through direct distribution channels, instead having to dump $20 million worth of marijuana into the wholesale market at a lower margin. Overall, earnings came in at a loss of $11 million for the quarter.

As for why Aurora Cannabis wasn't able to sell its cannabis through direct channels, I'd argue that this comes down to the ongoing problems in the Canadian market. Most provinces have struggled to stock their dispensaries with pot products as logistical issues continue to lead to shortages at retail locations as well as bottlenecks between producers and provincial authorities . While this is expected to clear up in the months and years to come, producers like Aurora Cannabis that are increasing their production are at risk of being forced to continue to sell their pot at wholesale prices.

Aurora Cannabis used to be one of Wall Street's favorite marijuana stocks, with Cowen & Co. analyst Vivien Azer singling the company out as her top sector pick earlier in 2019 . Now that the stock has fallen by 50.4% since reaching its 2019 high point in mid-March , financial experts are starting to change their tune.

Another major sell-off came last week when Stifel Nicolaus analyst Andrew Carter issued a sell rating for Aurora Cannabis just months after he started covering the company. Assigning a new price target of just 5 Canadian dollars, or 30% lower than its current price, Carter argued that this recent financial disappointment will be the beginning of a larger, much more worrying trend. Eventually, he expects Aurora will need to return to the capital markets in order to drum up more financing.

The problem in such a situation is that the markets right now aren't all that enthusiastic about cannabis stocks. With the industry as a whole declining significantly over the past six months, even investors interested in a higher-risk investment within the marijuana market have grown wary. Aurora Cannabis hasn't done much to impress investors despite its size and reputation.

Although Canada's "Cannabis 2.0" legalization for CBD-derived products is just weeks away, investors aren't as excited this time around as they were back in 2018. The allure of fantastic gains has all but evaporated in light of the industry's poor performance, leaving investors all the more cautious. Investors should be careful which stocks they pick, and it's uncertain if Aurora Cannabis will be one of those that recovers once October's 2.0 legalization comes around.

The excitement around the cannabis industry has risen and fallen over the past year, with investor sentiment swinging back and forth like a pendulum. While back in 2018, the markets were overly optimistic, now I'd argue they have become overly pessimistic. The Canadian adult-use cannabis market has plenty of room to grow, especially in more populated provinces like Ontario, where there remain relatively few dispensaries compared to its overall population . However, new projections suggest Canada's market size could be worth $5 billion by 2021, which is less than previous estimates closer to the $8 billion range but arguably more realistic.

I'd argue that the pendulum of investor sentiment will swing back in the months to come, hopefully toward a more balanced outlook regarding cannabis stocks. Aurora Cannabis' performance this quarter, while disappointing, was reasonable. Where it made a mistake was in issuing an unaudited guidance report just a month prior to reporting its financials, which ultimately hurt what otherwise was a decent quarter, especially in terms of all the other important, nonrevenue metrics. Why did Aurora do this? To put it simply, investors have been clamoring for profitability from cannabis companies, and Aurora likely wanted to appease them. Unfortunately, the effort backfired.

While Aurora Cannabis isn't my top pick in the cannabis sector, I think it's one of the better large-cap cannabis giants in the marketplace and could end up recovering once market sentiments swing back to a better place. Overall, I think Aurora is a good long-term investment, and investors would do well to buy shares now rather than sell.