As of noon EDT, NIO's American depositary shares were trading down about 24% from Monday's closing price.

NIO delayed the release of its second-quarter earnings until today, amid rumors that the company was running low on cash. Those rumors were justified: NIO posted a loss of 3.3 billion yuan ($478.6 million), far worse than Wall Street's consensus expectation of a 2.6-billion-yuan loss as reported by Bloomberg.

More to the point, NIO said it had just $503.4 million in cash and equivalents remaining as of June 30, down from $1.12 billion just three months prior. Costs related to the launch of its new electric SUV, the ES6, were partly responsible -- but an ongoing sales slump was also an important factor, and that slump continued into the third quarter. 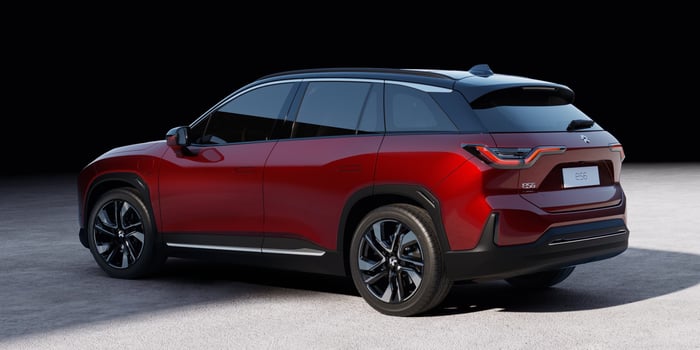 NIO is pinning its hopes for survival on the ES6, a new battery-electric compact luxury SUV. Image source: NIO.

NIO said that its sales picked up in August, as production of the ES6 ramped up. And it's raising $200 million from Tencent Holdings and CEO William Bin Li, which will help. But with China's new-car market still weak, and Tesla just a few months away from opening its new Shanghai factory, the company still faces questions about whether it can survive for much longer.

Alas, those questions weren't answered on Tuesday: In a move that probably contributed to the sell-off, the company abruptly canceled its earnings conference call.

NIO and its investors have to hope that the $200 million cash infusion gives the company enough breathing room to get production of the ES6 up to full speed -- and that customers continue to buy them. The company's third-quarter guidance calls for gains in both revenue and deliveries versus the second quarter: If it can deliver on those expectations, its chances of survival should look a bit better than they do now.