Please ensure Javascript is enabled for purposes of website accessibility
Free Article Join Over 1 Million Premium Members And Get More In-Depth Stock Guidance and Research
By Billy Duberstein - Sep 25, 2019 at 8:21AM

Investors don't often get a chance to invest in a Hollywood agency. But do the risks outweigh the hype?

This week, Hollywood agency Endeavor Group Holdings (NYSE: EDR) will be going public on the New York Stock Exchange under the symbol EDR. Founded by Ari Emanuel and several partners from Hollywood Agency ICM in 1995, Endeavor initially began as a boutique agency in order to focus on television. Current co-CEO Patrick Whitesell, with expertise in films, joined the firm in 2000, marking the first stage of Endeavor's growth from its niche roots into a global powerhouse.

Endeavor has since grown into an industry giant through a slew of acquisitions, the most consequential of which was the merger with the William Morris Agency in 2009 during the depths of the Great Recession. Other notable acquisitions include the 2014 acquisition of IMG Worldwide Holdings, a sports and modeling agency and event production company, as well as the 2016 purchase of 50.1% of Zuffa Parent, which owns the Ultimate Fighting Championship (UFC) mixed-martial arts league. Other smaller, recent acquisitions include arts event and media company Frieze, professional bull-riding league PBR, and streaming services tech company NeuLion. Endeavor also formed Endeavor China in 2016.

Yet while there may be a strong temptation to invest alongside Hollywood's most ambitious agency and content development platform, investors should be aware of not one, but several potential risks before diving in. 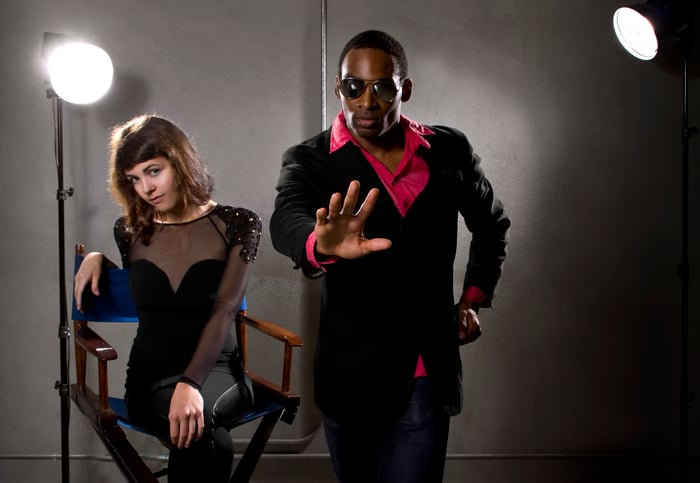 The first problem in analyzing Endeavor is that it's fairly difficult to gauge its true earnings power, with a significant gap between the company's earnings according to generally accepted accounting principles and what the company puts forward as its "adjusted" earnings and EBITDA:

Don't get misled by the GAAP $316 million profit in 2019. That year benefited from a near-$700 million gain-on-sale of the company's college sport marketing business.

In fact, as public investors, you should always look closely at "adjusted" profit numbers given by companies, especially one that is looking to go public. That's because adjusted net income figures conveniently add back non-cash (but very real) or nonrecurring (which usually recur) expenses, such as stock-based compensation, the amortization of certain intangible assets, merger and acquisition costs, certain legal costs, and a bunch of other fair-value adjustments. It takes time to parse through what impact those items truly have on a company's finances and operations.

Endeavor isn't the only company to tout "adjusted" numbers to investors -- far from it. However, the extent of these adjustments is quite large in Endeavor's case. For instance, in 2018 alone, stock-based compensation was almost $150 million, and amortization of intangibles was a whopping $301 million. That immediately turns the $100 million adjusted profit into a $350 million loss.

And that's not to mention another $120 million combined across merger, acquisition, and earn-out costs, certain legal costs, and restructuring, severance, and impairment costs. In Endeavor's case, many of these costs aren't likely to be one-time in nature, since the company has grown mainly through acquisitions, incurring at least $90 million in such costs in each of the last three years.

According to a recent article in Variety, company CFO Jason Lublin said, "We're going public to be more nimble and responsive for our clients and for us, and to give us capital and currency for M&A, which has and will continue to be central to our strategy."

Given that acquisitions are central to Endeavor's strategy, investors should probably factor these costs into Endeavor's bottom line.

In the offering, Endeavor will only be selling about 19 million shares between $30 and $32 per share, raising roughly $550 million in net proceeds not including underwriters' choice to buy more shares. This will only give public shareholders 8% of the economic interests in the operating company and 0.5% of voting rights in the company.

This amount Endeavor is raising is relatively tiny, but it's roughly the exact amount it needs to pay off a loan that was called on September 11, for which the company drew on its existing first-lien credit facilities.

It goes like this: in conjunction with its 2016 acquisition of UFC, UFC -- now a subsidiary of Endeavor -- issued $360 million preferred equity units. On Sept. 11, these preferred note-holders redeemed the notes at the earliest date possible (the third anniversary of the acquisition). Including interest and the early call premium, Endeavor quickly paid $537.7 million to these preferred equity holders. To do so, Endeavor used $77 million of cash on hand and drew $465 million of UFC First Lien Term Loans.

So, why has Endeavor moved so quickly to tap the equity markets just two weeks later and pay off this incremental debt? Two reasons. One, the recent drawdown caused S&P Global to lower Endeavor's credit rating by one notch.

Second, by my calculations, it appears the extra debt may have put Endeavor in violation -- or very close to violation --  of its debt covenants. According to the S-1, Endeavor had a whopping $4.6 billion in debt as of June 30, 2019, of which about $4.5 billion was characterized as "first-lien."

The company's debt covenants say that Endeavor's first-lien debt cannot exceed 7.5 times its adjusted EBITDA in certain circumstances, and drawing the extra $465 million for the UFC preferred notes should have brought first-lien debt load to about $4.97 billion. That's a bit over 8.3 times the trailing 12-month adjusted EBITDA of $594 million.

The company may not technically be in violation unless it has also tapped over 35% of its additional revolving credit facilities. However, this limited flexibility with respect to future borrowing is likely one key reason why management wanted to move forward with its offering.

So while the company is portraying this offering as an opportunity for investors to get in on a modern large-scale entertainment platform, a skeptic might view the IPO as tapping the equity markets to bail the company out of a near-term debt payment it may or may not have expected.

Investors should also know that when buying into the IPO, you are only buying into the Endeavor Holding Company, which owns 58.6% of the Endeavor Operating company. The remaining 41.4% of the Operating Company is owned by an entity called "WME Holdco," owned by Emanuel, Whitesell, other insiders, and certain affiliates of Silver Lake, a private equity firm that has bankrolled much of this massive acquisition spree. These entities own most Class Y shares, which are entitled to 20 votes per share, good for 97% of the collective voting power over Endeavor.

There are also a few other unusual provisions from the S-1 that raise questions about future treatment of new IPO shareholders:

Tax receivable agreement: First, since the company has a history of GAAP losses, it has a lot of tax assets, if and when Endeavor ever becomes profitable. However, the operating company has agreed to pay 85% of these future tax benefits to "post-IPO tax receivable agreement holders" -- which the S-1 defines as being these same insiders. These benefits have totaled only $135 million on paper thus far, but according to the registration documents, these payments could eventually total $1 billion over time. That's about 12.5% of the proposed market cap of the entire company.

Preferred returns on asset sales: In addition, WME Holdco is entitled to a 5% preferred return upon the disposition of certain investments by the company. Since the operating company holds interests in so many smaller companies, joint ventures, and other assets, it's possible more asset sales could happen. Hypothetically, if the company only makes a 5% gain on the sale of any of these assets, all profits will go to WME Holdco, not to common shareholders.

While these two examples are relatively small, public investors should be wary that their interests aren't perfectly aligned with those of Endeavor's controlling shareholders.

Aside from these instances, there are, as you might expect with any company with "key executives," some potentially questionable executive compensation incentives.  It appears that the higher the valuation Endeavor receives in the market, the more of that gain will immediately be diluted through equity issuances to Emanuel.

According Emanuel's new employment agreement, if the company achieves a public valuation of at least $7.5 billion -- which it looks set to do this week -- Emanuel gets profit awards of $25 million. For each additional $1 billion in market cap, Emanuel will receive another $12.5 million or more. These benchmarks solely refer to stock prices rather than operating results, and even if such stock gains prove temporary due to post-IPO hype, it's not exactly clear by my reading when or if these equity awards can be clawed back should the stock subsequently fall.

Getting paid for stock price action and not financial operating benchmarks was also part of Elon Musk's controversial pay package at Tesla ( TSLA 1.64% ). As my colleague Adam Levine-Weinberg eloquently wrote, these types of incentives could potentially lead to risky "bet the company" moves or efforts to chase revenue growth to hype the stock price, rather than focusing on risks and profitability. Given Endeavor's debt-fueled empire-building past, these incentives aren't particularly encouraging.

Endeavor also stated a material weakness in internal controls in its registration statement, having to do with the company's not having a sufficiently documented risk management process and sufficiently documented compliance communication and investigation policies. Though the company states this doesn't impact any of the reported financial results, the extreme complication of the company's financial statements -- due to the complex ownership structure and the volume of acquisitions the company has done -- raises additional concerns for IPO investors.

Lastly, the IPO comes at a time when agencies are fighting against the Writers Guild of America (WGA). Many Hollywood writers recently criticized WME and other agencies over their conflicts of interests as both agent and producer on many projects, leading many writers to drop their agents earlier this year in protest.

There is actually a lawsuit still pending in federal court filed by the WGA, whereby the WGA is seeking to eliminate all packaging fees charged by agencies. Although this involves all agencies, and not only Endeavor, it's another risk for which investors should be aware.

Tread carefully on this Endeavor

Endeavor's sheer scale, revenue growth of mid-teen percentages, and a valuation of about 2 times sales may seem like an exciting and unique investment opportunity. However, if interested, you need to beware of all the above concerns regarding uncertain profitability, the company's high debt load, its complex ownership structure, and its ongoing battles with the WGA.