The Food and Drug Administration really wants to see an over-the-counter (OTC) version of the opioid overdose medication naloxone -- so much so that it's doing the legwork needed to get the ball rolling.

In a statement on Friday, the agency noted:

In January, we took an unprecedented step in helping to encourage development of OTC naloxone products. To encourage drug companies to enter the OTC market, the FDA designed, tested and validated the key labeling requirements necessary to approve an OTC version of naloxone. To do this, we developed a model Drug Facts label (DFL) with pictogram instructions so anyone with access to the drug can better understand how to administer it. To ensure the pictograms are easy to understand, we also conducted label comprehension testing with consumers. This was the first time the FDA proactively developed and tested a DFL to support development of an OTC product.

The agency hopes the drug companies will use the validated model DFL as part of their application for approval of an OTC nalaxone.

The FDA is always willing to help guide drug companies in what's needed to get their products approved, but, as noted in the statement, the agency doesn't usually do the work for them.

Of course, these are unprecedented times with the opioid crisis in full swing. 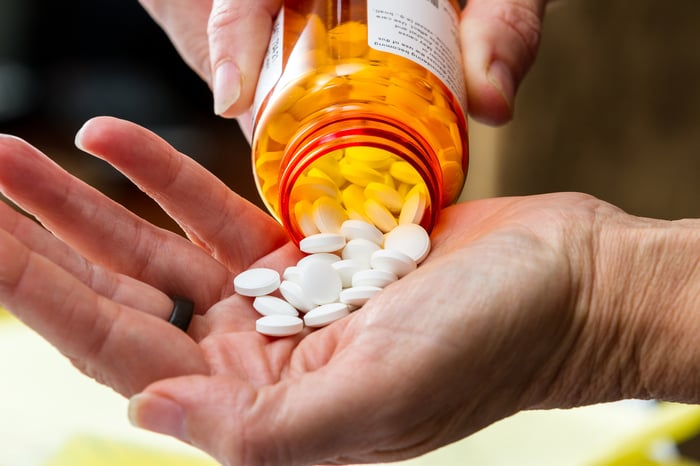 Who will blink first?

Moving from prescription to OTC status has generally been beneficial for drugmakers. Heartburn medications, such as Procter & Gamble's Prilosec, and allergy medications, think Johnson & Johnson's Zyrtec, are good examples. The switch typically comes with a substantially lower price, but companies can make up for the lower cost with higher volume.

But whether naloxone drugmakers can make up for a lower price with higher volumes remains to be seen. Most states and the District of Columbia have laws that allow pharmacists to dispense naloxone under a standing order, so an individual prescription isn't needed. Essentially the drugs are already treated like OTC products -- or more like "behind the counter," because they're not sitting on the shelf and the customer has to ask the pharmacist for the medication.

Emergent BioSolutions (NYSE:EBS) estimates that about half of its naloxone nasal spray product, Narcan, are bought by first responders or for placement in public places. It seems unlikely those sales would increase if the drug was available OTC. Whether the retail market, which makes up the other half, could increase enough to justify a lower price for first responders/public interest is questionable.

It'll be interesting to see if Emergent BioSolutions or privately held Kaleo, which sells an auto-injector version of naloxone called Evzio, bite on the FDA's offer to set up an OTC version of their respective drugs. If one company proceeds, the other will likely need to follow, which could result in a race to the bottom for price, especially since both face generic competition. That's good for consumers, but not for Emergent BioSolutions' and Kaleo's bottom line.

Nine states have enacted co-prescription laws that require doctors to prescribe a naloxone product when they prescribe an opioid drug. The laws can cause a one-time bolus of sales; first-half Narcan sales were $138.5 million thanks to laws enacted in California and New Mexico, which the company expects to wane in the second half of the year. More importantly, longer term, the laws provide an opportunity for continued sales as new opioid prescriptions are established.

While conversion to OTC status might not be in the drugmakers' best interest, a national co-prescription mandate could be a huge boon to Emergent BioSolutions and Kaleo. The FDA hinted that it's "considering situations where co-prescribing of naloxone may be appropriate, including possible updated product labeling."

If the FDA really wanted to get as much naloxone drugs into the public's hands as possible, the agency should have led with that.