The shifting winds of sentiment about prospects of trade talks with China turned positive today and overshadowed domestic political intrigue. The Dow Jones Industrial Average (DJINDICES:^DJI) and the S&P 500 (SNPINDEX:^GSPC) dipped in the morning and then rose the rest of the session to close with gains. Technology shares led the market, while healthcare was the weakest sector.

As for individual stocks, Nike (NYSE:NKE) blew out expectations for its recent quarter, and controversy over vaping led to the end of merger talks between Altria Group (NYSE:MO) and Philip Morris International (NYSE:PM). 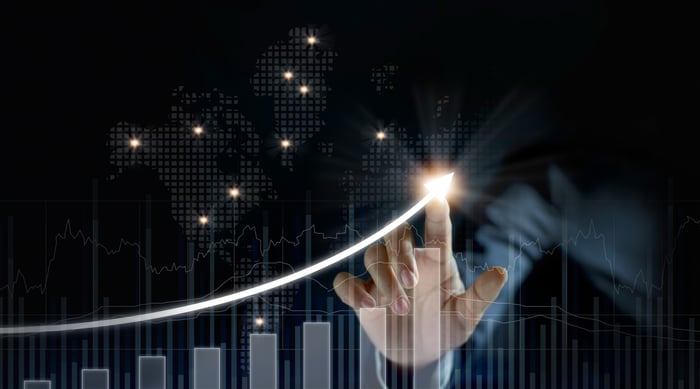 Shares of Nike hit an all-time high today, rising 4.2% after the company reported a near-perfect fiscal first quarter that beat expectations. Revenue of $10.7 billion was up 7.2% from a year ago and up 10% on a currency-adjusted basis. Earnings per share grew 28% to $0.86. Analysts were expecting the company to earn only $0.70 per share on revenue of $10.4 billion.

Nike's growth was broad-based, both geographically and across product lines. Revenue increased 4% in North America despite the company intentionally cutting back sales to some wholesalers. Revenue grew 12% in constant currency in Europe, the Middle East, and Africa; 6% in Asia Pacific and Latin America; and 22% in Greater China, where digital sales soared a whopping 70%. Nike brand footwear sales jumped 11% and apparel rose 9%, excluding currency.

Possibly the best news in the report was that higher prices were helping grow margins faster than expected. Gross margin increased 1.5 percentage points to 45.7%, and Nike raised its gross margin forecast for the full year, saying it will expand 50 to 75 basis points.

Growing pressure to crack down on vaping products led to the resignation of the CEO of e-cigarette maker Juul Labs and end of merger discussions between Altria and Philip Morris. The latter's investors celebrated the news by bidding up the shares by 5.2%, while Altria stock slipped 0.4%.

The two tobacco giants had disclosed the merger discussions a month ago, but the news wasn't very well received by shareholders of either company. Today, Altria CEO Howard Willard said in a press release, "While we believed the creation of a new merged company had the potential to create incremental revenue and cost synergies, we could not reach agreement." Altria, which owns a 35% stake in Juul Labs, also endorsed the appointment of K.C. Crosthwaite as the new CEO of Juul, acknowledging the importance of addressing underage vaping.

Statements from both companies commented on working together on a successful launch of Philip Morris' IQOS heated tobacco product. IQOS is not a vaping product and has received pre-market authorization from the U.S. Food and Drug Administration, potentially giving it an advantage over embattled Juul Labs.