Please ensure Javascript is enabled for purposes of website accessibility
Free Article Join Over 1 Million Premium Members And Get More In-Depth Stock Guidance and Research
By Rich Duprey - Jul 1, 2019 at 8:17AM

The FDA just might eliminate all of its competition.

Juul Labs currently dominates the U.S. electronic cigarette market with a 75% share, while Philip Morris International ( PM 1.75% ) currently has 0%. But if things go well for Philip Morris over the next two years or so, those positions could be completely reversed.

The global tobacco giant is about to introduce its IQOS heated tobacco device to the U.S. market. Sales will probably be brisk if Philip Morris International's experience in other markets is any indication of how it will be received here. Moreover, given the current regulatory environment, it seems highly likely that Philip Morris and its domestic partner, Altria Group (NYSE: MO), will quickly come to completely own the market. 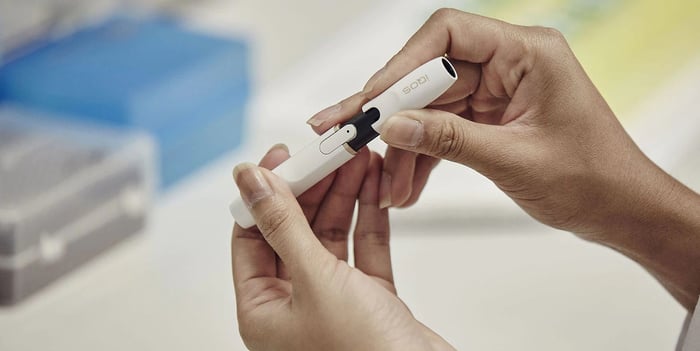 With all the competition hamstrung, IQOS could very well become the only e-cig on the market. While critics called the FDA's e-cig regulations the "Big Tobacco Protection Act," undoubtedly few foresaw that the agency would create what could become an electronic-cigarette monopoly.

Give Philip Morris International credit. Unlike its competition, the global tobacco giant didn't wait to submit a marketing application to the FDA. It acted immediately.

In December 2016, it submitted its modified-risk tobacco application for IQOS to be able to market it as safer than cigarettes and three months later submitted its premarket tobacco product application (PMTA) for review. The PMTA is required from all electronic cigarette manufacturers and must be FDA-reviewed and approved before any new tobacco product can be legally sold in the United States. In late April, the FDA gave Philip Morris the right to sell IQOS, while holding off on approving Philip Morris' claim that the product is safer than traditional cigarettes.

Meanwhile, with other e-cigarette manufacturers, the agency initially pushed back the compliance deadline until 2022 (and subsequently moved the deadline up to 2021 earlier this year) and allowed new products to be introduced to the market without a review. Anti-smoking activists charged that the agency violated its responsibility to regulate the devices and sued in federal court to force the FDA to act. The judge in the case agreed and last month demanded the FDA come up with a plan to regulate e-cig makers.

The FDA offered a 10-month deadline for PMTAs to be submitted; the anti-smoking groups want a six-month deadline. Both will allow devices to stay on the market for a year pending agency review of their applications.

The problem for e-cig makers is that the application is not a simple two-page document. Philip Morris' application is said to have been over 1 million pages long and cost millions of dollars to produce. Small manufacturers simply won't have the financial resources to comply with the complex rules to keep their products from being pulled from the market.

Big manufacturers have the resources to meet the onerous requirements but haven't done so yet. British American Tobacco ( BTI 1.24% ) has said it was ready to submit its PMTA before the 2021 deadline, but the quickly closing compliance window may make that a more difficult task.

Yet even if British American or other tobacco companies do ultimately submit a PMTA, it may be a long wait for approval. The agency says it aims to make a decision on an application within six months of receiving it, but it took the FDA over two years to approve IQOS, and Philip Morris' reduced-risk assessment is still ongoing. Even if there's not a deluge of applications at the deadline, it could still take the agency a long time to sort them out.

Nowhere else to turn

Juul and Altria are in a special situation. Altria paid $12.8 billion for a 35% stake in the leading e-cig maker, but Juul has come under intense scrutiny over purported teen use of its device. Former FDA commissioner Scott Gottlieb doubted the device will be approved because of it.

That means IQOS could be the only electronic cigarette left standing after the PMTA deadline has passed and the waiting period for agency action has come and gone.

That gives Altria special standing as it has the potential to benefit from both Juul and IQOS as two of the biggest brands on the market. Even if doomsday scenarios come true, Altria will still have the rights to market IQOS.

With several years of marketing success under its belt from selling IQOS in other countries, Philip Morris has reason to believe that its heated-tobacco platform will be a big hit in the U.S. market. That's good news for Philip Morris and Altria, and even if a rival manages to make it through the regulatory labyrinth eventually, IQOS will have a big head start toward dominating the e-cig market.