Already facing tougher scrutiny because of the rising teen use of  electronic cigarettes, the industry now faces a dramatically shortened window to submit applications to the Food and Drug Administration for review.

A U.S. district court judge ruled last month the regulatory agency illegally allowed the devices to remain on the market without a safety review and gave the agency two weeks to come up with a plan to correct the oversight.

The FDA subsequently recommended e-cig manufacturers be given just 10 months to submit their preapproval applications, after which they would be allowed to stay on the market for a year while they were reviewed. The antismoking groups that sued the FDA for failing to regulate e-cig makers want the judge to impose a maximum six-month deadline. 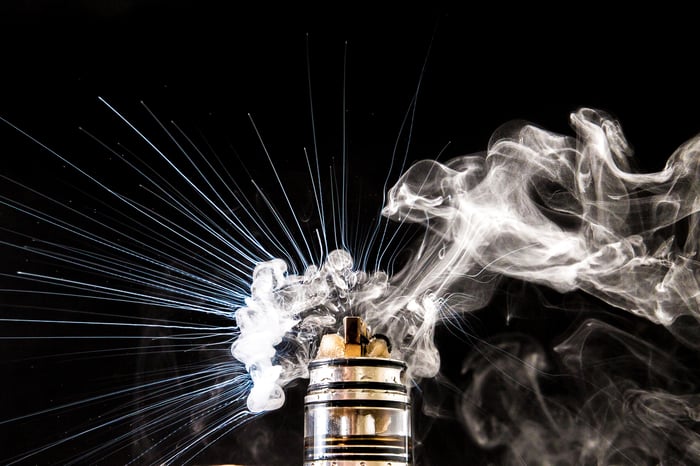 The e-cig industry seems set to go up in smoke since a judge demanded the FDA regulate the industry. Image source: Getty Images.

In 2016 , the FDA was given the power to regulate e-cigs but when President Trump took office the following year, then-commissioner Scott Gottlieb pushed the date back to 2022. At that point, laws regulating the devices would become effective, but manufacturers would still be allowed to bring their products to market in the meantime.

That was a short-lived honeymoon, because following Altria (MO 1.21%) investing $13 billion in industry leader Juul Labs, the commissioner proposed tough new regulations and moved the deadline for compliance up to 2021.

In his ruling, though, the judge was dismissive of the FDA's actions and accused the agency of abdicating its responsibility under the language of its statutory authority to regulate manufacturers. And he held it was the e-cig companies' own fault if they'd relied upon the FDA's guidance in conducting their business, writing that "if they have chosen to delay their preparations ..., then any hardship occasioned by their now having to comply is of their own making."

He also found them complicit if not actually conspiratorial in using the window of opportunity the FDA's regulation postponement provided to lure teens to e-cigs and get them hooked.

He wrote, "Arguably, the five-year compliance safe-harbor has allowed the manufacturers enough time to attract new, young users and get them addicted to nicotine before any of their products, labels, or flavors are pulled from the market, at which time the youth are likely to switch to one of the other thousands of tobacco products that are approved – results entirely contrary to the express purpose of the Tobacco Control Act."

Regardless of the judge's animus toward the FDA and the e-cig industry, manufacturers are going to have difficulty in complying with regulations that will require nearly every electronic cigarette device on the market to be reviewed on whether or not it can still be sold.

It raises the potential that some of these devices, which have been credited with getting smokers to switch to a less harmful alternative, will be completely withdrawn from the market.

Because the agency has also proved incapable of moving at anything other than a glacial pace in determining suitability for market, some manufacturers also stand to go out of business before their applications see the light of day, since the FDA will only allow their products to stay on the market for a year while the agency has historically taken over two years to arrive at a decision.

To date, only one premarket tobacco product application (PMTA) for e-cigs has been approved by the FDA, that for Philip Morris International's (PM 0.40%) IQOS device, which will be sold under Altria's Marlboro brand. It was submitted in March 2017 but wasn't approved until two years later, and the tobacco giant's application for the device to be considered a reduced-risk product was actually submitted three months before the PMTA, but the agency still hasn't made a decision on how it should be classified.

Each was a multimillion-page document that cost millions of dollars to produce, meaning only manufacturers with the deepest pockets -- or, like Juul, those aligned with a tobacco giant -- will be able to begin the compliance process, let alone navigate the lengthy regulatory labyrinth. It's why the regulations were ultiamtely dubbed the "Big Tobacco Protection Act" by critics.

Now that the judge has issued his order and the FDA has offered a compromise that is only slightly less onerous than the one proposed by those wanting to put the industry out of business, it may just result in the ruinous, end-of-the-world predictions industry advocates made two years ago when the regulatory framework that's now about to ensnare electronic cigarettes was erected.

Want Low Volatility In 2023? Buy This Tobacco Stock With a High Dividend Yield
395%