Shares of Nike (NYSE:NKE) were up 4.2% as of 3 p.m. EDT Wednesday after the athletic footwear and sportswear behemoth announced stronger-than-expected fiscal first-quarter 2020 results.

Quarterly revenue grew 7.2% year over year (or 10% at constant currencies) to $10.66 billion, translating to 25% growth in net income to $1.367 billion, and -- thanks to share repurchases over the past year -- a 28.4% increase in earnings per share to $0.86. For perspective, three months ago Nike told investors to expect revenue growth to be "in line to slightly above" the 4.1% it achieved last quarter, while most analysts were modeling lower earnings of $0.70 per share. 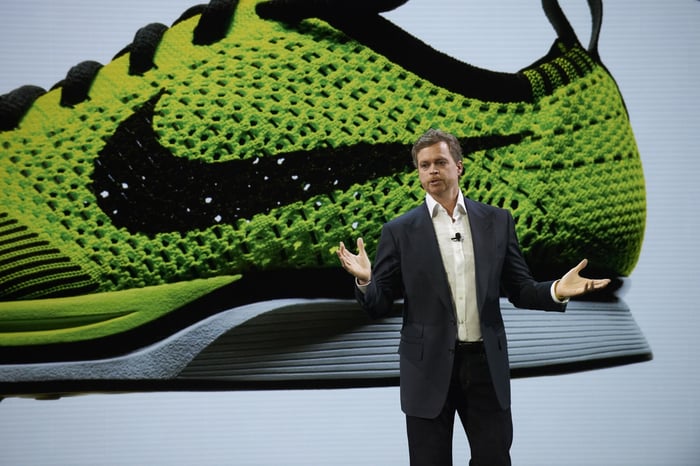 Top-line growth was broad-based across each of Nike's key geographies as well, including a 4% constant-currency increase in North America; 12% growth in the Europe, Middle East, and Africa region; 27% in China, and 13% in the Asia Pacific/Latin America region.

Its relative outperformance was even more impressive in light of what CFO Andy Campion described as today's "increasingly volatile macroeconomic and geopolitical environment."

For the current second quarter of fiscal 2020, Nike expects reported revenue growth to be roughly in line with the first quarter, leaving it comfortable reaffirming its full fiscal-year outlook for growth in the range of high single-digit percentages. Nike also modestly raised its outlook for full-year gross margin to expand 50 to 75 basis points (up from its old target for a 50 basis point increase), even after accounting for the impact of recently raised tariffs.

With shares up only slightly over the past year leading into these impressive results, it's hardly surprising to see Nike stock climbing as the market absorbs the news.