With the growth rate of tuition still outpacing inflation, parents need to invest in companies that can grow even faster.

Thinking about how much it will cost to send their children to college is enough to provoke anxiety in most parents. A four-year course of study at a public institution can run to more than $100,000 even at in-state tuition rates, and a bachelor's degree from a private university can cost twice that.

Fortunately, parents who are able and willing to plan ahead have time on their side, with the power of compounding growth working in their favor. Saving for college is particularly challenging given that the cost of education continues to rise faster than inflation. That fact, combined with the past decade's low interest rates, means that investing in assets that have the potential for faster gains -- such as individual stocks -- is essential to keep the value of your educational savings from losing ground.

If you're looking for growth companies to invest in today that could help put you in position to cover college expenses down the road, Shopify (SHOP -1.42%), HealthEquity (HQY 0.34%), and Costco (COST -0.42%) are three excellent options with strong positions in their markets. 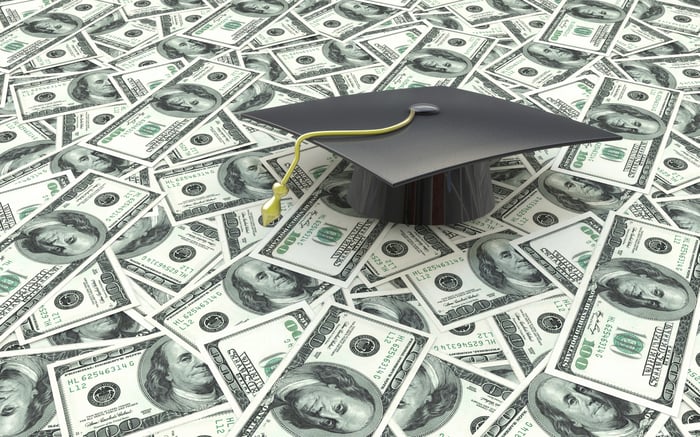 The growth of e-commerce is sure to continue for years to come, and a good option for investors looking to exploit that trend is by buying shares of Shopify. Its cloud-based software-as-a-service offerings enable businesses small and large to sell products online, and it is the clear leader in that space. Shopify's suite of services actually does much more than just facilitate online product sales. It also enables merchants to manage their products and inventory in physical stores and online marketplaces, ship orders, connect with customers, and obtain financing.

The company's dominance in its growing niche has yielded tremendous top-line growth. In the second quarter, revenue grew 48% year over year to $362 million, and gross merchandise volume -- the dollar value of orders processed on its platform -- grew 51% to $13.8 billion. Shopify gets a small cut of every transaction on its platform, as well as recurring revenue from the subscription fees paid by its 820,000 merchant clients. The company isn't yet profitable -- it lost $28.7 million in Q2 -- but management's focus at this point remains on investing in Shopify's growth.

And growth is likely to continue for some time. Besides riding the explosion of e-commerce, Shopify is adding new services to its platform and expanding internationally. The company plans to spend $1 billion over the next five years building out its logistics capabilities to provide its customers with fast and cheap shipping options that will help them keep up with the e-commerce giants. It also added 11 new native languages last quarter to bring its total to 18.

Shopify stock is never cheap, but investors get nervous about it periodically and shares go on sale for a while. Now is one of those times: The stock has fallen more than 20% from its all-time high after the market hesitated to endorse the company's expensive acquisition of a warehouse robotics company and heard about its plans to conduct a secondary stock offering.

The 2020 political campaigns have included a great deal of discussion about the future of healthcare in this country, and some of the options being offered have spooked investors, causing some to avoid the stocks of healthcare companies. Shifting the United States to a single-payer system would rock the entire industry. But a more likely outcome will be legislation that tweaks the existing system, with continued reliance on the private sector.

Any market-based approach to health insurance is almost certain to include health savings accounts (HSAs), a triple-tax-advantaged innovation established by the federal government that works in combination with high-deductible, lower-premium insurance policies. Market leader HealthEquity works with employers and plan providers to set up and maintain HSAs. The company's cloud-based software platform allows end-users to shop for medical products and services, make contributions, and invest the money in their accounts.

HealthEquity makes money three ways. Health plans and employers pay it fees for providing account services, generally on three- to five-year contracts. The company also earns custodial fees on the assets in the accounts, earning interest on cash balances and fees from mutual funds in which members invest on a self-directed basis. Finally, members get debit cards connected to their HSAs which they use when paying for qualified medical expenses, and the company earns a fee for each transaction.

In the second quarter, revenue increased 22% year over year to $86.6 million, with custodial revenue growing 42% to $43.6 million. The number of HSAs increased by 16% and custodial assets grew 21% to $8.5 billion. HealthEquity is solidly profitable, generating $19.5 million in net income last quarter and $0.45 per share on a non-GAAP basis.

Shares of HealthEquity have been pummeled recently, and are now selling 40% below the all-time high set last year. Beyond the political worries, investors were unhappy with the lower profit guidance offered last quarter, and may not be totally sold on the company's recent $2 billion acquisition of WageWorks. The issues are temporary, though, so today's lower price is a good opportunity for long-term investors to buy in.

Costco isn't growing as fast as HealthEquity or Shopify, but what makes it an attractive investment is its amazing consistency. Consumer stocks tend to ebb and flow with the economy, but the warehouse store's winning formula seems to deliver through thick and thin.

The retailer is driving growth by improving its comparable-store sales, building new locations, and, occasionally, raising membership fees. Last quarter, the company's revenue rose 7.4% and earnings per share rose 11%, not including a one-time tax benefit. Comp sales grew 5.6% excluding the effects of gasoline sales, currency exchange, and an accounting change. The company operates 773 stores and is growing that number at a rate just shy of 3% per year. Memberships are growing even faster; the total number of paid members increased 4.3% year over year in the most recent quarter.

Growth numbers may vary from quarter to quarter, but it seems very likely that over the long term, Costco's business can continue to grow faster than college expenses do, and its shares can continue to beat the market. The company still has plenty of expansion opportunities, especially overseas. The opening of its first store in China last month was wildly successful. It's still early days for the company's e-commerce business, which grew 19.5% last quarter; it plans to begin online sales in Japan and Australia later this year. Shares are only 7% below the all-time high set earlier this month, but the stock of this consistent business rarely goes on sale.

Words to the wise

In the long term, stocks like these have a good chance of beating the market, but in the short term, nobody can reliably predict where the market will go. Be sure to keep any money that you'll need for college expenses in the next few years out of stocks and in safe cash equivalents or other income-producing investments such as bonds or CDs.

If you're panicked because the day you'll need to start writing checks to the bursar's office is approaching soon, and you feel unprepared financially, don't try to make up for lost time by rolling the dice and hoping to get lucky on short-term stock market movements. Instead, remember that more than 70% of full-time undergraduate students receive grant aid to defray the costs and that Parent PLUS loans may be part of the answer for you and your young scholar.