Streaming video start-up Quibi is generating a lot of buzz because it promises to do for short-form video content what Netflix (NASDAQ:NFLX) did for long-form streaming. And because Quibi is designed as a mobile-first app, with content structured around video consumption in small bites, it has the potential to accelerate a whole new arms race in streaming video.

Quibi isn't scheduled to launch until April 2020, but founders Jeffrey Katzenberg and Meg Whitman are lining up an impressive array of Hollywood talent and studios to back the venture with content. It is also getting a lot of financial support, having already raised $1 billion to acquire content, and it expects it will need another $500 million before launch. 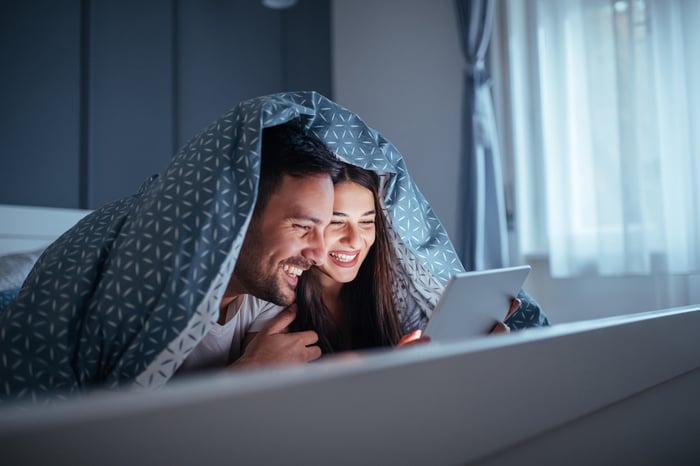 Facebook's Instagram launched IGTV, Snap has its Snap Originals programming, and the concept is even getting a trial on Match Group's dating site Tinder, with Swipe Night, a four-episode, choose-your-own-adventure miniseries. But the medium is still in the proving stages of whether short-form video content can work over the long haul.

Hollywood comes to the smartphone

Quibi is also looking to create bite-size original content (the name stands for "quick bite") that can be consumed in 10 minutes or less. It will be oriented for both vertical and horizontal viewing. The difference, however, is the quality of content it intends to offer, coming from some of the biggest names in the industry.

Steven Spielberg will be producing and writing a series for the platform; Naomi Watts will star in a Jason Blum-produced series; Steven Soderbergh is on board; Guillermo del Toro and Sam Raimi will be making several horror shows; and Antoine Fuqua, who directed Training Day, will be producing a two-and-a-half-hour movie, #Freerayshawn, that will be divided into 15 segments of 10 minutes in length.

There will also be news from the BBC and NBC News as well as reality TV shows. Whitman told an audience of TV and film producers: "Our view is we have to launch with a lot of this new form of content. You can't go to Quibi on Day One and see 2.4 shows." It plans to have 7,000 episodes of content within its first year, launching around 25 episodes a day.

The attraction for these Hollywood heavyweights to come to Quibi when there is such a hunt for talent by more traditional streaming platforms like Netflix, Hulu, and Apple TV+ is the eventual ownership of the content after airing on Quibi.

The shows will be exclusive to Quibi for the first two years, after which ownership of the full-length version of a show like #Freerayshawn will revert to the producer. After seven years, all versions of the show will be owned by its producer.

To make the arrangement profitable for Quibi, the service will be both ad-supported and subscription-based. For $5 a month, a subscriber will get the version with ads; for $8, it will be ad-free. The ads themselves will also be episodic, with their length determined by the length of the programming they're attached to.

That makes it a stronger challenger not only to Netflix, but also to streaming competitors like Hulu and Disney's new Disney+, which is being offered for only $7, though it comes bundled with other programming.

The jury's still out

Quibi is unique because it is a mobile-only platform. While television may come at some point, right now it is solely being geared as an app for smartphones and tablets.

Whether it's successful or not will depend upon how long someone is willing to stay to see movies and shows on a phone and pay for the opportunity to do so. So far, the experience of Snap, Instagram, and others suggests viewers are willing to watch short-form content. But paying up to do so -- as Quibi is now asking -- may require another leap.