Please ensure Javascript is enabled for purposes of website accessibility
Free Article Join Over 1 Million Premium Members And Get More In-Depth Stock Guidance and Research
By Keith Speights - Sep 26, 2019 at 6:00AM

But do low volatility metrics translate to high confidence for these stocks' future prospects?

High volatility comes with the territory when you invest in cannabis stocks. Anyone who follows these stocks knows that they're likely to experience dramatic swings both up and down.

The most commonly used metric for measuring this volatility is the beta coefficient of a stock. Beta compares a stock's movements relative to the overall market, or a certain stock index -- typically the S&P 500 index.

I looked at the three-year beta calculated on a monthly basis for all stocks in the cannabis industry with a market cap of at least $200 million to find the three least-volatile pot stocks on the market right now. You might be surprised at the results. 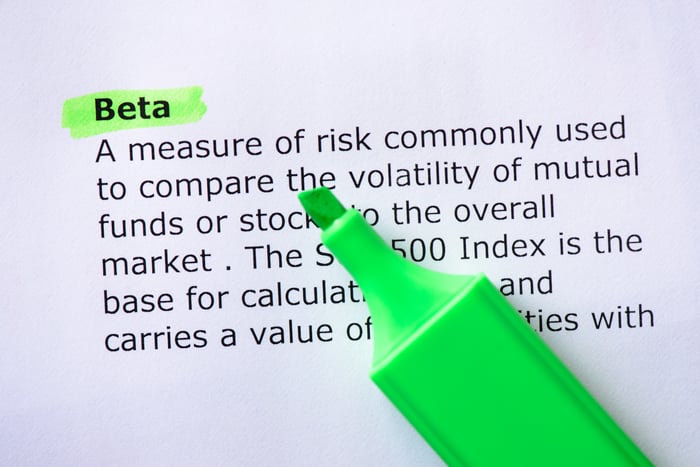 CV Sciences ( CVSI -3.09% ) has the unique distinction of claiming a negative beta of 0.22. A negative beta occurs when a stock tends to move in the opposite direction of the market.

The stock technically isn't a pot stock. It's really a hemp stock, but CV Sciences is included in most lists of pot stocks you'll find. The company ranks as one of the leaders in the hemp-derived cannabidiol (CBD) products market. It develops both consumer products and CBD-based drugs for smokeless tobacco cessation.

Business has boomed for CV Sciences since the passage of the 2018 farm bill last December. The company reported record-high revenue of $16.9 million in the second quarter. However, that figure wasn't as high as what analysts expected. This disappointment combined with uncertainty about what actions the U.S. Food and Drug Administration (FDA) might take regarding CBD products has caused CV Sciences stock to plunge in recent months.

TerrAscend ( TRSSF 5.79% ) ranks as the second-least-volatile pot stock on the market with a beta of 0.34. Unlike CV Sciences, the small Toronto-based company is clearly engaged in the business of producing and selling marijuana.

In August, TerrAscend posted its highest quarterly revenue ever, with Q2 sales totaling 17.6 million in Canadian dollars. This reflected a 21% increase from the previous quarter. TerrAscend's strong growth stemmed from higher sales in the Canadian adult-use recreational market.

The company isn't limiting itself to just Canada, though. TerrAscend is expanding in New Jersey, which is on the path to legalize recreational marijuana. It's building multiple cannabis dispensaries in California. The company also recently completed the acquisition of Pennsylvania-based Ilera Healthcare.

Scotts Miracle-Gro ( SMG 1.06% ) is best known for its consumer lawn and garden products. But the company's Hawthorne subsidiary makes it a top supplier of products to U.S. cannabis producers, qualifying Scotts as a bona fide pot stock. And its beta of only 1.08 makes the stock the third-least-volatile pot stock on the market right now.

2018 was a rough year for Scotts, as the launch of the recreational marijuana market in California didn't go nearly as well as planned. However, this year has been a different story altogether. Scotts blew past Wall Street expectations with its third-quarter results, with Hawthorne's sales skyrocketing 138% year over year.

While California remains Hawthorne's biggest market, other states have become increasingly important. Scotts continues to enjoy especially strong growth in emerging markets in Florida, Massachusetts, Michigan, and Ohio. In addition, the company's core consumer lawn and garden products business is performing well thanks in part to the introduction of several new products.

Should you buy these three pot stocks with the lowest volatility? My advice is don't bet on beta.

I was actually surprised that the beta coefficients for these stocks were as low as they were. If you look at their stock price movements over the last three years, there's an awful lot of volatility.

This points to a major drawback with using a metric like beta. First of all, the beta values that I obtained are calculated on a monthly basis. There can be a tremendous level of volatility within the month that isn't picked up. Second, negative correlations during some periods can offset positive correlations during other periods, making the overall volatility appear to be lower.

The bottom line is that all three of these stocks are much more volatile than their beta values seem to indicate. I like Scotts Miracle-Gro, though, not due to its low beta, but instead because I think continued growth in the U.S. cannabis market presents a great opportunity for the company. Investors are much better off focusing on business prospects than beta coefficients with pot stocks -- or stocks in any industry.