Micron fell on concern over its outlook, and Delta Air Lines announced a new partnership in Latin America.

Consumer spending in the U.S. slowed in August, and that news coupled with reports that the Trump administration is considering new measures to pressure China sent major benchmarks sliding. The Dow Jones Industrial Average ( ^DJI -0.17% ) and the S&P 500 ( ^GSPC -0.84% ) moved lower most of the session but partially recovered in the final hour. Tech stocks were hit the hardest, while the financial sector managed a gain.

As for individual stocks, Micron Technology ( MU -1.52% ) fell on a weak outlook for profit, and Delta Air Lines ( DAL -1.80% ) announced a partnership to strengthen its position in Latin America. 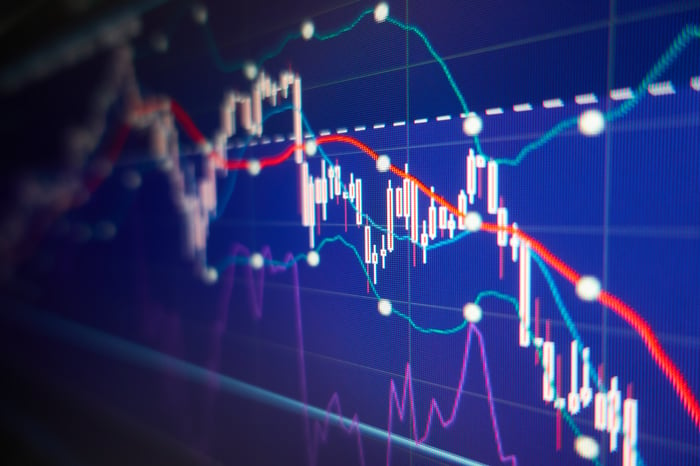 Semiconductor manufacturer Micron Technology announced fiscal fourth-quarter results that beat expectations, but its forecast of a continuing decline in profit margin sent shares down 11.1%. Revenue fell 42% to $4.87 billion, but that was better than the 46% drop analysts were expecting. Non-GAAP earnings per share came in at $0.56 compared with $3.53 in the period a year ago, well above the $0.49 analyst consensus.

Micron said on the conference call that demand in the industry remains healthy for both DRAM and NAND memory. The other side of the equation is supply, though, and industry supply growth is leading to cyclical pricing declines. Micron is nevertheless still profitable during this downturn, after going into the red in earlier ones. The company also said that it expects NAND supplies to come more in balance with demand in 2020, and industry margins for NAND, currently at a 10-year low, should start increasing later this year.

The airline giant will invest $1.9 billion for a 20% stake in Latam in a public tender offer at $16 per share, financed by cash and newly issued debt. It will also invest $350 million in the Chile-based carrier, acquire four of its A350 aircraft, and assume its commitment to buy 10 more A350s over the next six years.

Delta says that the transaction will add to its earnings per share over the next two years and will not impact its goals for free cash flow and shareholder returns. The two partners combined will hold the leading position in five of the top six Latin American markets from the U.S., according to Delta's press release. Delta has been looking to the region for growth, and also owns a 49% stake in Aeromexico.