The stock market climbed higher on Thursday morning, seemingly unaffected by the impeachment of President Trump by the House of Representatives. Investors seemed to take the expected move in stride, and few believe that the Senate will actually vote to remove the sitting president. As of 11 a.m. EST, the Dow Jones Industrial Average (DJINDICES:^DJI) was up 98 points to 28,337. The S&P 500 (SNPINDEX:^GSPC) rose 7 points to 3,198, and the Nasdaq Composite (NASDAQINDEX:^IXIC) gained 28 points to 8,856.

Some individual stocks saw some big moves. Rite Aid (NYSE:RAD) skyrocketed following on its latest earnings report. However, Micron Technology (NASDAQ:MU) also gained ground, as investors had similar hopes that the worst might be over for the chip giant.

Shares of Rite Aid soared 47% Thursday morning after the drugstore chain reported its third-quarter financial results. The long-suffering company has had to deal with a lot of challenges, but its Q3 performance raised hopes for a better future. 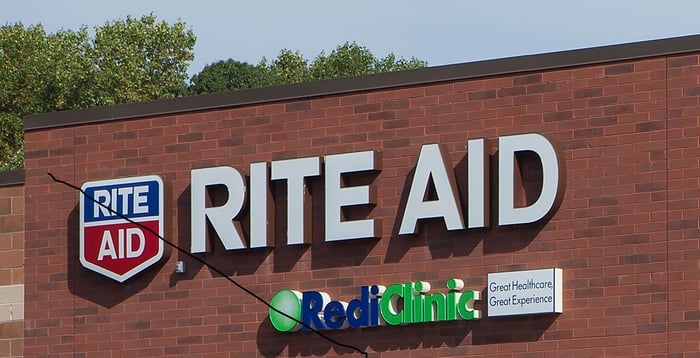 Rite Aid's numbers marked a big turnaround from prior-year results. The company reported adjusted net income of $0.54 per share, reversing losses from the third quarter of last year. Revenue managed to hold steady year over year, even though store counts were down from the year-ago period. Although retail pharmacy sales fell, the pharmacy services segment saw gains due to rising membership in the company's Medicare prescription drug program.

Moreover, Rite Aid is feeling more optimistic about the future. The drugstore chain still expects to lose money in fiscal 2020 using regular accounting rules, but it sees an adjusted profit for the year. Rite Aid also believes that it will be able to post same-store sales growth after a long downward trend.

Rite Aid has gone through a lot in recent years, and it still has more work to do. Nevertheless, being able to put up impressive numbers was enough to restore some confidence in the stock.

Shares of Micron Technology gained 2% in the aftermath of the chipmaker's fiscal first-quarter financial report. Although Micron's numbers weren't terribly good, they were still sufficient to make some believe that the downward cycle for the chip sector might finally be coming to an end.

On their face, the financial results from Micron showed continued suffering. Revenue was down 35% from year-ago levels, and net income plunged 85% year over year. Yet investors had such low expectations for Micron that they were actually pleased that the figures weren't even weaker.

But CEO Sanjay Mehrotra suggested that the cyclical memory chip market might be approaching a bottom, pointing to better prospects later in the fiscal year. With efforts to find stronger markets that produce better profits, Micron is seeking to find longer-term strategies that will pay off consistently.

That doesn't mean a turnaround will be quick, as Micron's guidance for the fiscal second quarter was still disappointing. But if the move to 5G technology spurs upgrades and more demand for chips, then it could benefit the tech stock at a particularly opportune time.