It's hard to believe that a stock up 60% this year could still be considered "cheap," but that's the case with Micron Technology (MU 4.21%). It may also be surprising that investors have been so bullish on the name lately, given that Micron is perhaps the most front-and-center company in the 18-month-long U.S.-China trade skirmish -- even more than other affected tech stocks.

Yet even with the Chinese threat quashed (for now), Micron still has many Chinese customers, including the controversial Huawei. In addition, as a cyclical stock, Micron is vulnerable if there is a broader economic recession. Currently, the U.S.-China trade war hasn't exactly been resolved, and there's still the possibility of recession. So why is the market more constructive on Micron now, whereas it was so scared earlier this year? 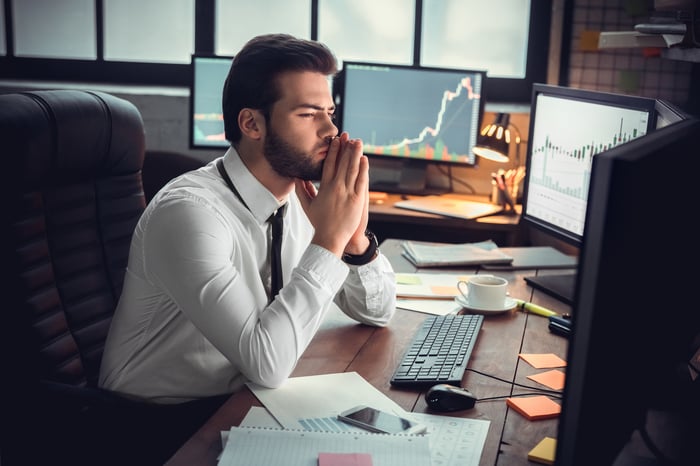 Micron is a buy, but it's not without risks. Image source: Getty Images.

Back then, the company was flying high on a surge of memory demand, thanks to the rise of cloud data centers, the proliferation of smarter devices, and new technologies such as 5G, the Internet of Things, and autonomous vehicles. But as the trade war dragged on, many of Micron's customers went from overly aggressive buying to overly cautious buying while working down their inventories. Adding insult to injury, PC giant Intel (INTC 5.08%) faced shortages of its processors, so even the bright spot of high PC demand couldn't be fulfilled by memory suppliers.

Micron and its memory competitors can't exactly adjust their supply at the drop of a hat, as they need to more or less constantly utilize their fabrication plants, so the market became oversupplied, and both DRAM and NAND flash chip prices crashed in early 2019.

While the trade war hasn't yet been resolved, the aforementioned tech trends are still going. Companies are still using cloud data centers, people are buying faster, more memory-packed phones, and leading telecoms are racing for 5G supremacy. All of this takes more and more memory, and there is only so much inventory a company can work through before it needs to buy more. According to several Wall Street analysts, it appears customers are finally increasing their demand for memory again.

At the same time, Micron, along with the rest of the memory industry, has cut back on capital expenditures, which should limit supply growth in 2020. After years of consolidation, Micron is one of only three major DRAM suppliers, and this oligopoly should be able to control industry supply better than in the past.

For its upcoming earnings report, to be released Sept. 26, Micron forecasts non-GAAP (adjusted) earnings per share of $0.45. That's not a good number, representing a whopping 87% decline from the prior year. Nevertheless, Micron has never been profitable in a cyclical trough before, and it's possible the coming quarter could be the trough of the recent memory downturn.

A rerating in order?

Traditionally, Micron has been valued more on a price-to-book value basis, with very low earnings multiples. As you can see, Micron is currently trading for just about 1.6 times book value, up from its recent bottom of 1, yet still fairly low in its traditional range between 1 and 3: 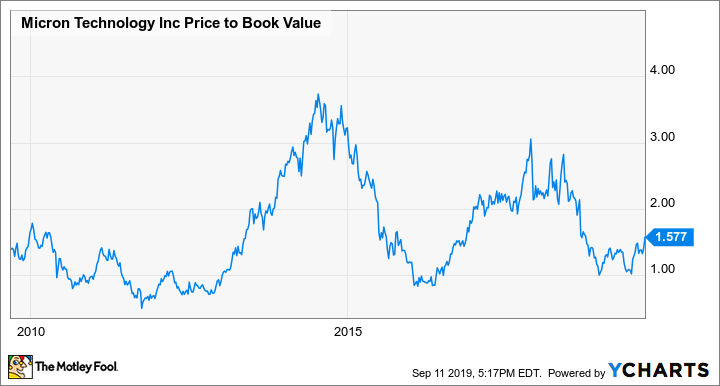 However, if another "up-cycle" is in the cards, Micron's price-to-book ratio could move upward. And if Micron can still make decent profits through a cycle bottom, it's possible its traditional valuation range could move higher as well.

Though I believe Micron is still a long-term buy, investing in it is not for the faint of heart. The company's earnings can go up and down very quickly, and it's a highly volatile stock. Should we get a real recession, it's possible that Micron's stock could dive again.

However, over the long term, new technologies like 5G, artificial intelligence, and the Internet of Things will need tons and tons of memory. Considering a consolidated industry and a still-cheap valuation, long-term investors should give Micron's stock a long look today, even after its impressive 2019 rise.