Many tech executives think 5G could be revolutionary. Which companies stand to benefit the most?

First there was the desktop computer. Then the PC. Then fiber-optic broadband. Then the mobile phone revolution. Then the cloud revolution. So, what technology is going to be the next big leap forward?

Though the hype may be a bit exaggerated at the moment, most tech executives think that 5G -- which will enable ultra-fast, ultra-low-latency wireless communications -- will eventually usher in a variety of futuristic tech applications such as autonomous driving, automated factories, mobile virtual reality, and others we may not even be able to fathom.

However, just because the future is sure to have more 5G doesn't mean every company involved will benefit. As Warren Buffett said in a late 1990s Fortune magazine interview on the tech revolution, not all companies involved in transformative innovation are sure to prosper. Taking the automobile as an example, Buffett said:

[T]here appear to have been at least 2,000 car makes, in an industry that had an incredible impact on people's lives. If you had foreseen in the early days of cars how this industry would develop, you would have said, "Here is the road to riches." So what did we progress to by the 1990s? After corporate carnage that never let up, we came down to three U.S. car companies -- themselves no lollapaloozas for investors.

So while investors should be careful about their 5G picks, a few companies do appear high-probability bets to cash in on this coming revolution. As of today, I'm putting my money on Apple (AAPL 0.17%), Taiwan Semiconductor Manufacturing (TSM 0.63%), and Micron Technology (MU -0.72%). 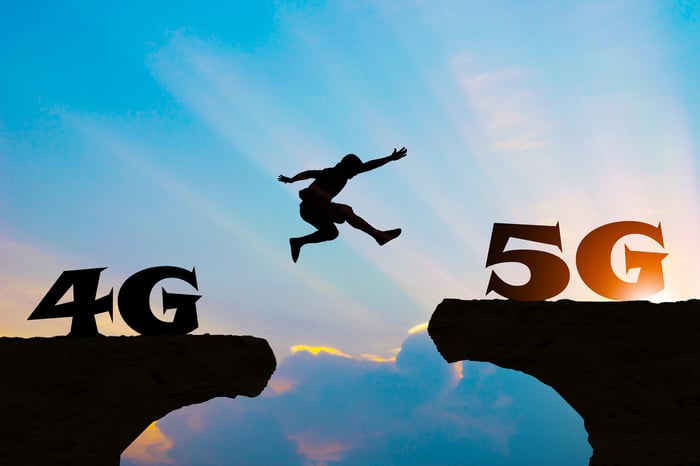 Which stocks will grow the most with the jump to 5G? Image source: Getty Images.

While 5G will enable lots of new enterprise applications, consumers will also reap benefits on their smartphones. Apple has managed to cultivate an intense brand loyalty and "sticky" platform with its flagship iPhone, whose iOS operating system differentiates it from the rest of the world that uses Android.

Apple has done a great job of leveraging that loyal fan base by selling additional Apple services, a segment that is growing 18% in constant currency, reaching 420 million subscriptions and $11.5 billion in the recent quarter alone. That's in addition to iPads and other accessories such as AirPod headphones, which are growing by leaps and bounds.

And yet, Apple still gets the majority of its revenue from iPhones, which has been the big fear for investors. Revenue from the iPhone fell last quarter, as people are becoming slower and slower to upgrade to the latest model. Last year, Apple management actually decided to stop disclosing iPhone units sold, a potential red flag pointed out by skeptics.

Leading Apple analyst Ming-Chi Kuo of TF International Securities believes all iPhones in Apple's 2020 lineup will be 5G phones. That means next year could mark the beginning of a big Apple refresh cycle, leading to iPhone growth once again. Given Apple's very reasonable valuation, rising dividend, and share repurchases, its shareholders seem poised to win big from the 5G revolution.

Speaking of Apple, the smartphone giant is designing more and more of its own custom chips in-house these days, such as its A-series processors. But Apple doesn't manufacture these chips itself; for that, it turns to Taiwan Semiconductor Manufacturing.

Taiwan Semi is the world's largest pure-play outsourced foundry, meaning that it doesn't produce its own chips, but rather manufactures them for other companies. Many of the world's leading chip designers -- from Apple to GPU makers NVIDIA and Advanced Micro Devices, to FPGA-maker Xilinx, to controversial Chinese giant Huawei -- all use Taiwan Semi's manufacturing.

Its years of experience and diversity of clients have allowed it to build formidable expertise. That culminated last year in the company surging ahead of Intel (INTC -0.86%) in the race to produce a 7-nanometer chip. On its recent earnings release, Taiwan Semi noted that the coming 5G build-out has led to greater-than-expected demand for these leading-edge chips, and thus a surge of demand.

Which chipmaker will win the 5G race? That's hard to say, but for Taiwan Semi, it doesn't matter. Whatever company wins out, it's likely to use Taiwan Semi as its manufacturing partner. While it might not have the upside of the eventual chip winner, the company seems set for steady growth and rising dividends for the next decade.

While it may be difficult to judge which advanced chip designer will take the 5G crown, one thing is for sure: Ultra-fast, low-latency communications will need tons and tons of memory and storage. That sets up particularly well for Micron, which produces both dynamic random access memory (DRAM) and NAND flash storage.

And later this year, the company will soon begin selling its new type of memory, 3D Xpoint, which combines some of the properties of both DRAM and flash. This diversified portfolio means Micron should benefit from rising memory demand over the next decade, whichever memory technology gets the biggest boost.

Micron has a few other elements going for it as well. It's one of only three major DRAM manufacturers in the world, forming an oligopoly. That means the industry players should be able to more closely match supply and demand. Memory is a notoriously cyclical industry, and it's currently going through a nasty downturn. Still, Micron has greatly reduced its costs over the past few years under new CEO Sanjay Mehrotra. Management projects it will still be profitable in the current quarter, which may be the trough of the current cycle. Micron has never been profitable in a cyclical trough before, so this development is a big plus.

It's hard to underestimate how much memory 5G will consume; 5G phones will likely have at least double the amount of DRAM and NAND than current leading smartphones. In fact, Samsung (OTC: SSNLF) just unveiled a Galaxy Note10 with a whopping 12GB of DRAM, about triple the amount in typical high-end 4G phones. Autonomous vehicles could use up to 100GB of DRAM, and artificial intelligence servers could use up to six times the amount of DRAM of current enterprise servers today.

Though the DRAM triumvirate and NAND flash players may have over-produced in the current downturn, 5G and next-gen applications will cause demand to inevitably bounce back -- it's just a question of when.