Please ensure Javascript is enabled for purposes of website accessibility
Log In Help Join The Motley Fool
Free Article Join Over 1 Million Premium Members And Get More In-Depth Stock Guidance and Research
By Billy Duberstein – Updated May 16, 2019 at 8:21AM

One of the hotter tech trends today is the migration to 5G wireless networks. It has been quite a big topic recently, with many of the leading wireless carriers rolling out early incarnations of 5G in select locations around the U.S.

At first, 5G may not seem like such a big deal -- it's an upgrade in terms of both speed and latency for wireless networks, but you might think that your phone is fast enough. However, the implications of 5G, if its purveyors are correct, are much bigger. High-grade 5G networks are thought to be a key enabler of many other new technologies such as virtual reality, 4K HD streaming, automation for the Internet of Things, and even self-driving cars. It could also potentially provide more competition for wireline broadband providers. There are also likely other applications and business models that don't even exist yet, but could be enabled by 5G.

Yet as it stands today, 5G is mostly hype, and likely will be for at least the next several years. Here's why. 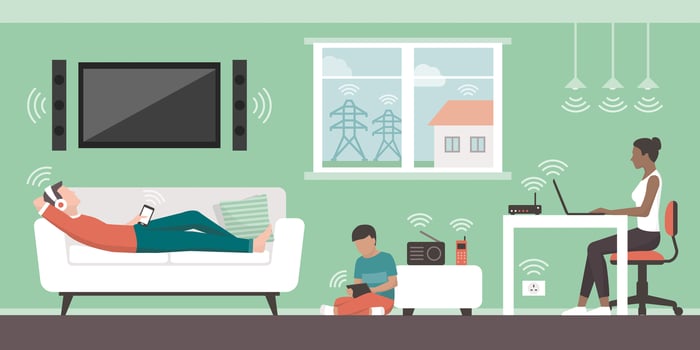 Implementation has been more difficult than thought

Most of the big service providers in the U.S., including AT&T (T -1.42%), Verizon (VZ -1.03%), and T-Mobile (TMUS -2.01%) have been building out their 5G network trials in select cities. However, there have been reports of unforeseen difficulties in these initial rollouts.

This isn't just one problem, but several, and solving one complication often causes another to pop up, like a game of whack-a-mole. Here are just a few of the bigger headaches that have recently been reported.

5G networks can achieve such lightning-fast speeds because they use mmWave spectrum, or high-frequency spectrum. This allows for higher speeds, but these waves don't go very far from the base station, and they have trouble penetrating walls and human bodies.

Current trials going on in Vancouver, British Columbia, have found that service providers need to install way more base stations in order to achieve any notable difference over 4G. While initial estimates were for about four to nine times the amount of base stations, the Vancouver trials show 5G may require something more like 30 times the number of base stations as 4G.

That would make initial investment much higher than thought, which could make 5G more expensive, and thus less used. It also wouldn't be practical to install except in extremely dense urban environments, where one could get more subscribers in a relatively small area. The suburbs and rural communities are likely out of luck. So, service providers could very well end up spending far more for fewer 5G subscribers, leading to dis-economies of scale.

These base stations are heavy!

In addition to needing far more real estate on which to plunk base stations, even if a good location is found, current 5G base stations are much heavier than 4G base stations. Steve Douglas, a 5G consultant who runs the aforementioned Vancouver trials, revealed that often these base station radios can break roofs or mounting poles. Therefore, a successful implementation may require reinforcing a building -- another added cost that probably wasn't contemplated by the large carriers.

Your phone's too crowded

Another problem with 5G doesn't come from the network side, but rather on the receiving end with early 5G handsets. We are currently seeing the rollout of the first "5G"-capable phones from the likes of Samsung (NASDAQOTH: SSNLF), Huawei, Motorola (MSI -1.41%), and others, but are these phones ready for 5G prime time?

The problem? There's too much going on in these phones; 5G requires multiple antennas, which makes it difficult to fit everything in the phone in a space-efficient way. In addition, early handsets are experiencing interference among the different signals going in and out of the phone. For instance, the large MIMO antennas on 5G handsets have been shown to interfere with the device's GPS signal, leading to a degradation in performance and thus the whole premise of 5G.

This will take some time

Though many of the leading wireless carriers in the U.S. are currently touting their "5G" networks that have just recently been turned on, let's be clear: This isn't really 5G. The current problems listed above are just a few in a long line of complications, and others are likely to arise.

But don't just take my word for it. Craig Moffett of telecom research firm MoffettNathanson said there is "zero chance" 5G will become ubiquitous by 2021. CoBank, which lends to rural telecom providers, estimates only 15% potential 5G market penetration...by 2025, a full six years from now.

So why are you hearing so much about 5G from the likes of AT&T and others? Mainly because carriers like AT&T are using "5G Evolution" branding for something that's actually just a premium version of 4G, and not that transformative. In fact, Sprint (S) just filed a lawsuit against AT&T because its marketing could potentially give 5G such a bad name.

Sprint's potential suitor, T-Mobile, also recently got into the game, with a blog post that basically destroyed Verizon's new $10-per-month 5G upgrade in Chicago and Minneapolis as spotty, unreliable, and a "rush job." T-Mobile suggests that mmWave spectrum isn't sufficient for large swaths of the country, and that it will be rolling out "real" 5G in the future on a combination of mmWave, midband 2.5 GHz spectrum, and low-end 600 MHz spectrum.

I'm still not sure how one can promise the speeds of 5G on mid- and low-band spectrum either, so even the "skeptic" T-Mobile has explaining to do as well.

The takeaway is this: Don't buy stocks today based solely on 5G mania. I do think that the service providers will invest heavily in the technology -- after all, they appear to have hyped themselves into a corner. Therefore, some of the 5G chipmakers such as Qualcomm (QCOM -2.01%) or Xylinx (XLNX) could do well. But will 5G lead to a scalable, profitable business for service providers? I'm not seeing it, at least not for another decade.