Taiwan Semiconductor Manufacturing (NYSE:TSM) is the world's largest third-party foundry. Unlike others that produce their own chips, TSM makes chips only for outside companies, including the likes of Apple (NASDAQ:AAPL), Huawei, NVIDIA (NASDAQ:NVDA), and Qualcomm (NASDAQ:QCOM). The diversity of chip types manufactured and its focus on manufacturing prowess has allowed TSM to catapult into the lead on leading-edge nodes, surpassing rival Intel (NASDAQ:INTC) in the race to the 7nm node (equal to Intel's 10nm).

TSM's stellar execution has allowed the company to grow -- along with its juicy 2.9% dividend -- over the years. TSM is committed to pay out around 70% of its free cash flow as dividends, which it has historically paid out only once per year, in July. However, this year, the company will be changing its dividend policy, as well as giving shareholders a nice dividend hike toward the end of year.

Since the chip industry is currently in the doldrums, some may ask how the company plans to raise its payout. Management offered an explanation to shareholders on its recent earnings call. 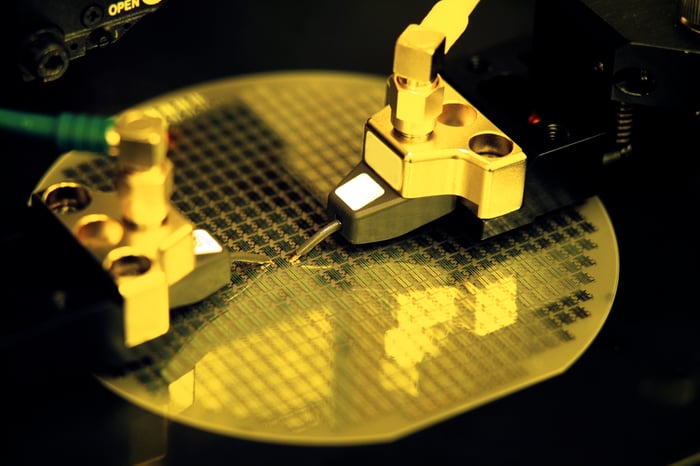 Raising the payout and going quarterly

This year, the company will be making the switch from paying one large annual dividend to paying out smaller quarterly dividends, as most dividend stocks do. The trend won't start right away, however. In July, the company will pay the same annual payout as in 2018, equal to $8 new Taiwan dollars (NT$) per share, which equates to roughly $1.31 per U.S. ADR. However, the company will pay an additional NT$2 dividend later in the year, bringing the total up to NT$10, or $1.64 per ADR. That would boost the yield to 3.6%, based on today's share price.

In addition, the company plans to continue raising its dividend in 2020, and that will come in regular quarterly installments from that point forward.

Can Taiwan Semi afford it?

One may wonder how Taiwan Semi can afford such a lavish payout, considering it just reported a quarter in which revenue was down 11.8% year over year, with net income down an even greater 31.6%. Those don't exactly seem like results that would garner a dividend increase.

And yet, Taiwan Semi has its pulse on the tech industry as few other companies do, and management is confident in a turnaround coming in the second half of this year. The first quarter saw a huge hangover from the trade war negotiations, U.S. interest rate hikes, a seasonal low in smartphone, and cryptocurrency bubble bursting at the end of last year. These economic headwinds all caused customers to pause purchases and work down excess inventory. Not only that, but TSM had a manufacturing glitch in the first quarter as well, which added insult to the macroeconomic injury.

However, management sees this changing as soon as the current quarter. CEO C.C. Wei said,

"We believe we may have passed the bottom of the cycle of our business as we are seeing customers' demand stabilizing. Based on customer indications for their business in wafer volume (ph) in second quarter, we also expect our customers' overall inventory to be substantially reduced and approach the seasonal level around the middle of this year."

Specifically, TSM sees higher-than-expected demand coming from high-performance computing (HPC) and the buildout of 5G networks. High performance computing refers to the next-gen CPUs, GPUs, and FPGA chips that will enable next-gen applications such as artificial intelligence and big data analytics. Management sees HPC being the key revenue driver over the next few years, saying this segment can grow double digits annually (aside from cryptocurrency chips). HPC will also take advantage of TSM's leading-edge 7nm chips coming out this year, and management says the market for 5nm chips will be even larger for HPC. TSM plans to introduce its 5nm chips as early as the first half of 2020 --shortly after Intel says it will be introducing its 7nm-equivalent chips.

Finally, Wei also says that the buildout of next-generation 5G networks is going faster than initially planned. These networks will need a huge number of small cells, all filled with high-power chips, so this is yet another bullish sign for the chip manufacturing giant.

Despite this quarter's hiccups, the future continues to look bright for Taiwan Semiconductor. The future world of AI, big data, IoT, and 5G networks all need faster and faster chips. With the clear lead in manufacturing these sought-after leading-node chips, Taiwan Semi should continue to benefit. No wonder the company is optimistic enough to hike its dividend.