JinkoSolar Holding (NYSE:JKS) is now arguably the largest solar manufacturer in the world, yet it's far from a household name in the U.S. Its products aren't sold directly to consumers, and as a Chinese manufacturer, it doesn't get much press here, so it's understandable that it might fly under the radar for most investors.

However, given the company's scale and profitability, it may be time for investors to start paying attention. Where JinkoSolar is today

JinkoSolar's primary business is building solar panels, and it has 10.5 gigawatts (GW) of wafer capacity, 7.4 GW of cell capacity, and 12.6 GW of module capacity. Canadian Solar (NASDAQ:CSIQ) is the only other manufacturer of similar size, but its chief business is assembling modules. It has 12.2 GW of module capacity and 9.3 GW of cell capacity, but just 5.0 GW of wafer capacity, so its manufacturing model is a little different than JinkoSolar.

That scale has allowed JinkoSolar to cut its costs and remain competitive in the global solar business. It is still subject to the fluctuations module prices go through, which is why its gross margin and net income dropped in 2018. The fact that it has survived as many of its competitors dropped out of the business, though, speaks well of the company's long-term position. 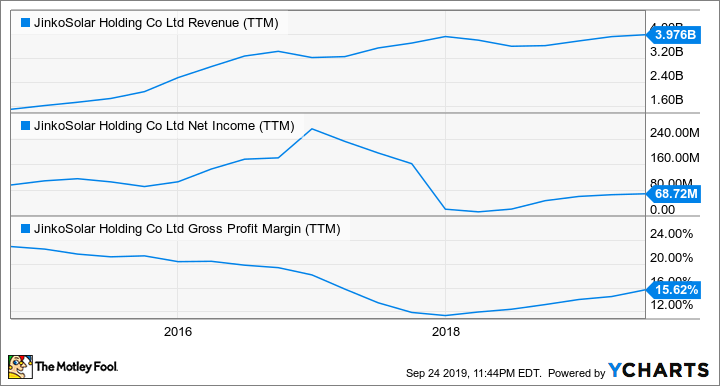 It's the combination of JinkoSolar's scale and the growth trend for solar overall that causes me to be intrigued about the company as a long-term renewable energy investment.

What does the future of solar manufacturing look like?

For the last decade, solar manufacturers have been beating each other up in a way that has done no favors to investors, but that period is ending and there are big opportunities for the company's that are left. In 2019, solar deployments worldwide will hit 115 GW, according to the IEA, and the industry is expected to grow steadily over the next decade as costs come down even further. That means the market will be getting larger just as manufacturing is consolidating to a handful of companies, and it would be nearly impossible to launch a solar manufacturing start-up today that was able to compete on the world stage.

Long term, that should lead to higher margins and profitability for manufacturers like JinkoSolar. The company generated nearly $250 million of net income just a few years ago, and if margins rise again, that figure isn't out of reach. That's the upside bullish investors should see, and I think profits will indeed rise.

Why JinkoSolar isn't a buy today

The one downside for JinkoSolar is that it holds $1.9 billion of debt and has a $3.3 billion market cap. Even if the company was able to generate $250 million of net income, it would trade for an enterprise value of 21 times net income. That's not a compelling value in energy, even if the company can increase margins and gain market share. I like the company's position as one of the biggest solar manufacturers in the world, but not the value today, and that's what will keep me from buying the stock.