If you're in the market for a high-quality retail stock, start your search with two of the best: Target (NYSE:TGT) and Walmart (NYSE:WMT).

After crushing second-quarter expectations, both retailers look to be performing at a high level. And in an age and industry where Amazon is constantly threatening the bottom line, the fact that these companies are able to adapt on the fly solidifies their staying power.

Although both companies look like solid investments at this time -- due to growing e-commerce sales, expanding revenues, and healthy consumer spending at both -- a retail investor looking to choose between the two must answer the question: which looks most prepared to reward shareholders in the future?

The winner becomes clear when judging on the basis of valuation, growth, and dividends. Target is the superior choice. 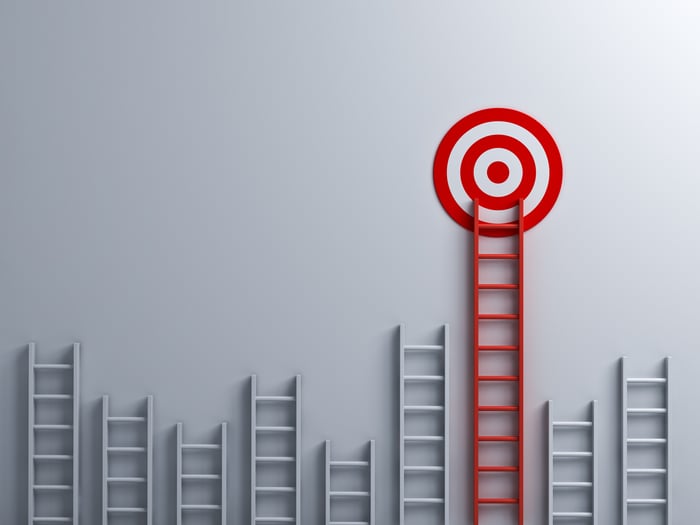 Target's stock looks cheaper than Walmart's on a multitude of valuation metrics.

Its low multiple may be due to the fact that Target is investing heavily to keep prices in check and bolster web operations -- and its appraisement is still reflecting that. But in the wake of its most recent earnings report, it looks like those days have passed. According to the company's second-quarter earnings report, operating income increased 16.9% on a year-over-year basis.

Couple this notion with an enterprise value-to-EBITDA (earnings before interest, taxes, depreciation, and amortization) of 9.58 for Target and 12.47 for Walmart, and it's clear that Target's stock is more fairly valued.

If you ask me, Walmart's sheer size is getting in the way of growth. After all, the company has a market cap more than six times the size of Target.

Although both companies are primed to grow at a healthy clip, Target is projected to grow twice as fast over the next five years. The company is putting in-store pickup, digital sales, and expedited delivery at the forefront of its focus -- and analysts are paying attention. Walmart is focusing diligently in these areas as well, however, Wall Street analysts' are estimating Walmart to grow earnings-per-share (EPS) at 4.56% over the next five years, while Target is projected to grow earnings-per-share 9.19% over the same time period. Walmart's lower growth projections may be due to its sheer size and thinner margins.

There's no doubt that the U.S.-China trade war is at the forefront of retail investors' attention. However, Target is in a better position to keep pricing stable if trade escalations deepen. It's loaded up on inventory and can tap into a robust supplier network in order to mitigate further tariff increases. With profit margins over 1.5 percentage points greater than Walmart's, Target can endure more pain before transferring costs down to consumers.

3. Target's dividend has room to grow.

What's more, although Walmart has a robust 30 year dividend history, Target's dividend history is longer. In fact, 2019 marks the 48th consecutive year in which Target has rewarded shareholders with an increase in its annual dividend. A demonstration of Target's commitment to increase and maintain its dividend.

Target's dividend prosperity is directly attributable to its financial stability and focus on omni-channel growth.