With some softness in the markets lately, there could be no better time than now to buy up these quality stocks.

The Federal Reserve cut interest rates this month for the second time in 2019. And there could be more to come, especially amid concerns about an ongoing trade war with China and the possibility that the economy slows down. However, there are three quality bank stocks that still look to be good buys today, despite the potential headwinds.

Goldman Sachs (GS -0.61%) has been going through some significant changes to its management team under new CEO David Solomon, but that doesn't mean investors should be worried about the stock. A new CEO sometimes just likes to have their own people in place, and as long as Goldman keeps producing solid results, it should continue to create value for shareholders.

One way that it's sure to add value is through the recent rollout of the new credit card the company launched with Apple (AAPL 0.19%) dubbed the "Apple Card." It's a virtual card that iPhone users can access from within an app, but they also get a physical one as well. It's a great opportunity for Goldman to work on developing its Marcus consumer banking segment, especially among Apple users who are used to spending lots of money on devices. 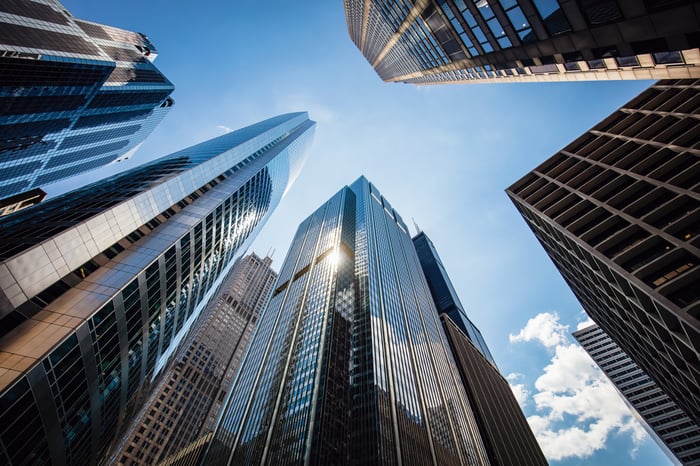 However, Goldman is already producing terrific results, reporting very strong second-quarter numbers that came in well above analyst expectations. The Apple Card could certainly help sales and profits soar even higher. Goldman's shares are already up 26% this year, and on top of that, it also pays a dividend of around 2.4%. With the stock trading right around its book value, there are plenty of good reasons to buy Goldman today.

Toronto-Dominion Bank (TD 2.44%) is an attractive option for investors looking to diversify outside of the U.S. market. While the company's TD Bank subsidiary has nearly 1,300 locations in the U.S., the bank stock also offers investors a way to take advantage of a strong Canadian economy, which is coming off a very impressive August that saw 81,000 new jobs added. The bank is one of the largest in Canada, and the bulk of its revenue still originates from the Canadian retail segment, which in its most recent quarterly report made up nearly 60% of its top line.

TD has achieved good growth over the years, with sales rising by 22% over the past three years while profits have soared by more than 41% during that time. Unfortunately, Canadian bank stocks haven't received a lot of love in 2019 and TD has been no exception. Although it is up 15% this year, that would be fine if it weren't for the fact that it's still recovering from a difficult 2018 that saw its share price fall by a similar amount.

The good news is that even after its recovery, the stock still looks cheap. Trading at less than 13 times earnings, Toronto-Dominion looks like a good deal for investors today.

JPMorgan Chase (JPM -1.40%) rounds out this list, adding one of the largest banks in the world. Shares have risen more than 20% this year and have been rallying in recent weeks, recovering from a sell-off that took place a few months ago, not long after the company released its most recent earnings.

Although JPMorgan reported very strong second-quarter results, it was the company's outlook that likely had investors second-guessing whether the stock was still a good buy. The negativity in the markets in early August surrounding tariffs and China only made things worse, sending not only JPMorgan down, but many other stocks as well.

Today, shares are still looking like a good buy, especially factoring in the dividend, which currently pays investors 3% per year. The bank is committed to increasing its payouts, and back in June, it also authorized $29.4 billion in share repurchases over the course of the next year, which is another way that it'll create significant value for shareholders.