Sales at U.S. department stores have been declining since the early 2000s. Early in that decade, Americans were spending close to $20 billion each month at department stores like Kohl's (NYSE:KSS), Macy's (NYSE:M), J.C. Penney (OTC:JCPN.Q), and Nordstrom (NYSE:JWN). Today, that monthly spending has been nearly cut in half. 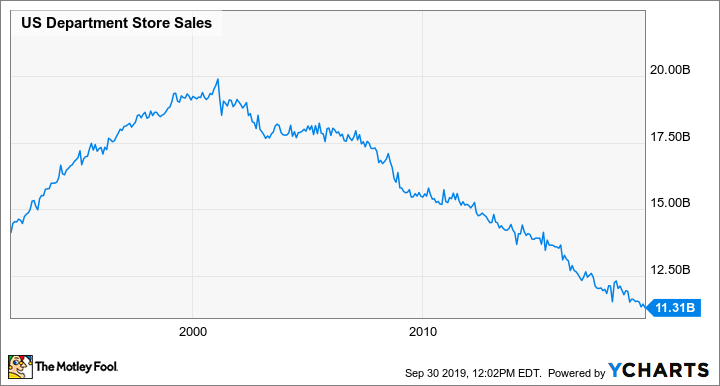 The internet is partly to blame for this, but competition from other big-box retailers may be an even bigger factor. While department stores have languished, discount stores like Walmart (NYSE:WMT) and Target (NYSE:TGT) have flourished. Against a backdrop of store closures and retailer bankruptcies, Walmart and Target have been reporting exceptional results.

There are some company-specific things going on -- Walmart has been successfully investing in online grocery, and Target has rolled out a slew of e-commerce initiatives and a large number of private-label brands. And on the department store side, J.C. Penney has been in turnaround mode for years after a disastrous reboot in 2012.

But the fundamental problem for department stores, especially those that emphasize low prices and value, is cost structure. Department stores are at a structural disadvantage to discount stores, unable to effectively compete on price. That's mattered over the past few years, even with generally healthy consumer spending. It will matter even more during the next recession.

Costs are a problem

Gross profit is what's left of revenue after deducting the cost of the products sold. For a retailer, this cost is mostly what it pays suppliers for its products. Gross profit as a percentage of revenue is gross margin.

Out of gross profit come all other costs associated with running retail stores. Selling, general, and administrative expenses generally include wages, advertising costs, depreciation, and everything else that's not directly related to acquiring products to sell. Gross profit minus all operating expenses yields operating profit.

If a company spends 30% of its revenue on SG&A expenses, it needs to produce a gross margin of at least 30% to turn an operating profit. The higher the SG&A expenses as a percentage of revenue, the bigger the markups on products needed to be profitable.

Department stores spend a lot on operating expenses, which means that they require high gross margins to turn a profit. It's a different story for other big-box stores. 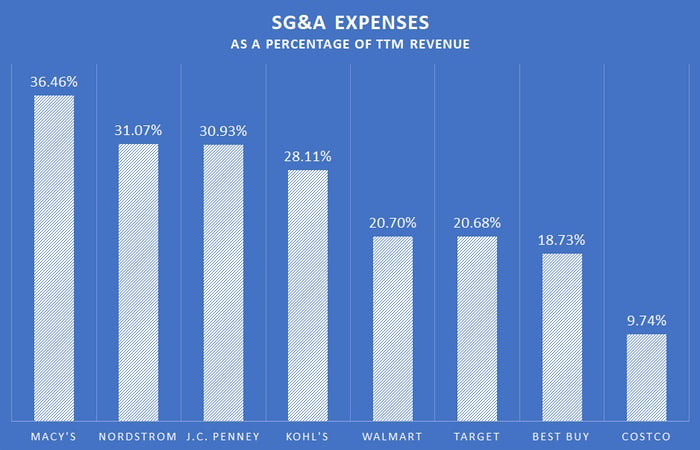 While Target and Walmart are spending around 20% of revenue on SG&A expenses, Macy's is spending more than 35%. The comparison isn't quite apples to apples -- some of these retailers exclude depreciation and amortization from their SG&A expenses, while others don't. But the gap between department stores and other big-box stores remains either way.

Warren Buffett warned nearly 15 years ago that department stores were headed for trouble. In an interview with a group of University of Kansas students, Buffett said:

...department stores have 35% gross margins. It's tough to compete against the best deal for customers. Department stores will keep their old customers that have a habit of shopping there, but they won't pick up new ones.

Buffett was right. There's little reason for someone who doesn't normally shop at J.C. Penney to choose the struggling department store over an alternative with lower prices. The same is true for any department store that tries to emphasize deals and low prices. 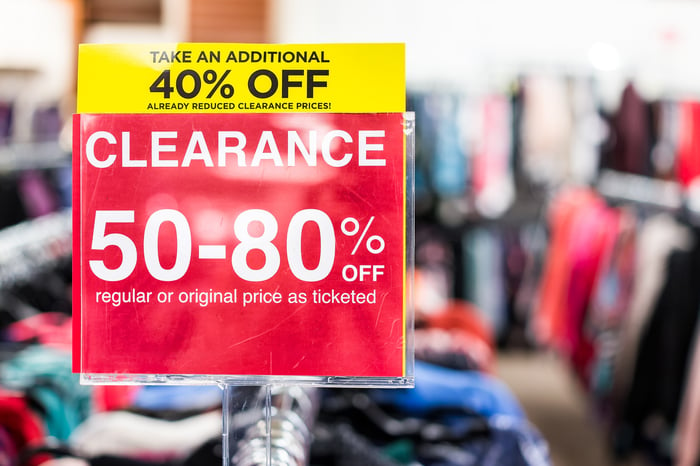 Of the four department stores mentioned above, Nordstrom may be the best bet, simply because it goes after less price-sensitive consumers. But it still faces plenty of competition from specialty apparel retailers.

While it's tempting to invest in beaten-down department store stocks, they're beaten down for a reason. Macy's trades for barely more than 5 times its guidance for 2019 adjusted earnings, a tantalizing valuation for sure. But are those earnings sustainable? If they're not, a low price-to-earnings ratio means nothing.

Investing in stocks that look cheap only works if those stocks are actually cheap. The jury is still out on department store stocks, but the odds don't look good.