At last report, the U.S. 2020 presidential election still features a whopping 19 candidates seeking the Democratic nomination (and a few aiming to displace President Trump from the Republican ticket as well). One recurring theme on the Democratic side that's starting to concern investors is healthcare reform -- and this morning it got one investment banker worried enough to announce a couple of downgrades. 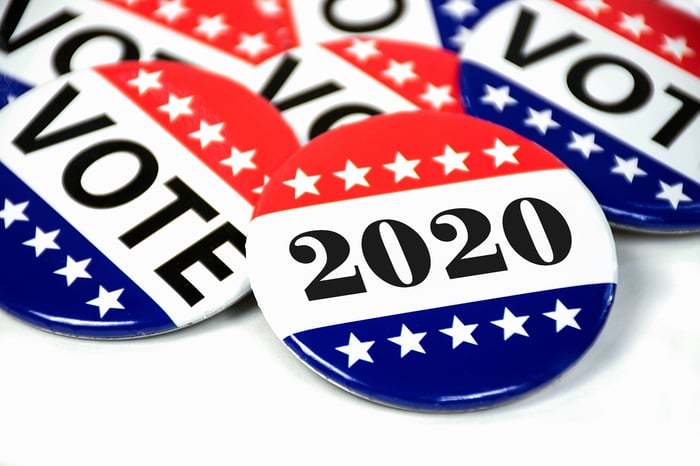 UnitedHealth Group (NYSE:UNH) was probably the higher profile of BMO Capital Markets' two downgrades, getting cut from outperform to market perform with a $249 price target (15% below BMO's previous estimate).

UnitedHealth rival Humana also got downgraded to market perform, with a 16% lower price target of $290. But the analyst's reasoning is the same for both stocks, so we'll just focus on UnitedHealth.

UnitedHealth's downgrade, as BMO explains in a note covered on StreetInsider.com, reflects a "new ratings bias toward lower valuation," as well as the analyst's worries about "political and health policy uncertainty." Among the Democratic contenders for president these days, there has been much discussion about the possibility of America switching to a "Medicare for All" system of healthcare.

Most candidates are against the idea, mind you, but they're all talking about it. And should a pro-M4A consensus form, and should it carry the day on Nov. 3, 2020, it's possible that the U.S. government could take on a leading -- or even exclusive -- role in paying for healthcare. That would diminish or even eliminate the role of private health insurers such as UnitedHealth, and certainly limit their growth prospects.

So while healthcare reform isn't a certainty, it is a risk to investors in UnitedHealth Group. And one of the best ways to limit such risk is to ensure that one doesn't overpay for stocks that bear the risk.

The problem with UnitedHealth, as BMO points out, is that at a valuation of "12.9x our 2020E EPS," the stock carries "a premium to the Payer market-cap-weighted avg. of 11.2x." Indeed, it's second only to Humana in valuation in this industry, "excluding WCG, which is in a pending deal with CNC."

And that may be too much to pay.

Consider: At 12.9 times forward earnings -- but 16.2 times trailing earnings, which is a more reliable valuation metric, in my view -- UnitedHealth Group sells for a PEG ratio of 1.2 relative to its anticipated long-term earnings growth rate of 13.5%. (Value investors traditionally prefer to buy stocks selling for a PEG ratio of 1.0 or lower.) Worse, that valuation is contingent upon UnitedHealth growing earnings at 13.5%, and not seeing its growth stymied by healthcare reform legislation in 2021 and beyond. Should new laws limit the company's role in national healthcare, UnitedHealth Group's earnings might not grow anywhere near 13.5%.

Long story short: 13.5% earnings growth may be a best-case scenario for this stock -- but the case could turn out to be far from "best."

And the situation could be even worse than that. In addition to growth concerns, investors in UnitedHealth have to consider that the company may not be as profitable as it appears on the surface, nor as cheap, either. Data from S&P Global Market Intelligence confirm that over the past 12 months, UnitedHealth generated only $10.4 billion in positive free cash flow from its business -- only about 80% of the company's reported $13 billion in GAAP profits. And this relatively weak cash flow, combined with a series of pricey acquisitions, has permitted UnitedHealth to build up a sizable debt load as well -- $25 billion net of cash on hand.

Consequently, when valued on its enterprise value versus actual free cash flow, the stock sells for an EV/FCF ratio of 22, which would appear to be pricey even if earnings do grow at the projected 13.5% annual rate!

Given the risks, and given a price tag that doesn't appear to factor in those risks at all, BMO urges investors to favor "lower valuation names," as TheFly.com notes.

That may be easier said than done, however. UnitedHealth rival Cigna, for example, sells for only 10.4 times trailing earnings, but the company carries a debt load even more significant (for its size) than does UnitedHealth. Anthem is less debt-laden but is more expensive than UnitedHealth (at least, when valued on trailing free cash flow). Molina Healthcare is both cheaper and boasts a better balance sheet...but generates negative free cash flow.

Given the risk and the dearth of attractive stocks to buy, perhaps investors are best advised to avoid investing in health insurers entirely...at least until after November 2020?