A top financial services conglomerate and a pet supplies e-commerce site both fell victim to gravity on Monday.

Monday was a fairly middling day for the stock market. At closing, it wasn't far away from the levels at which it opened.

The results for individual stocks were generally mixed, with many rising in price and plenty dropping. Among these stocks were a veteran financial services company and a new-ish pet supplies purveyor.

After the trading day they had, let's have a look at whether the two companies are potential buys at now-discounted prices. 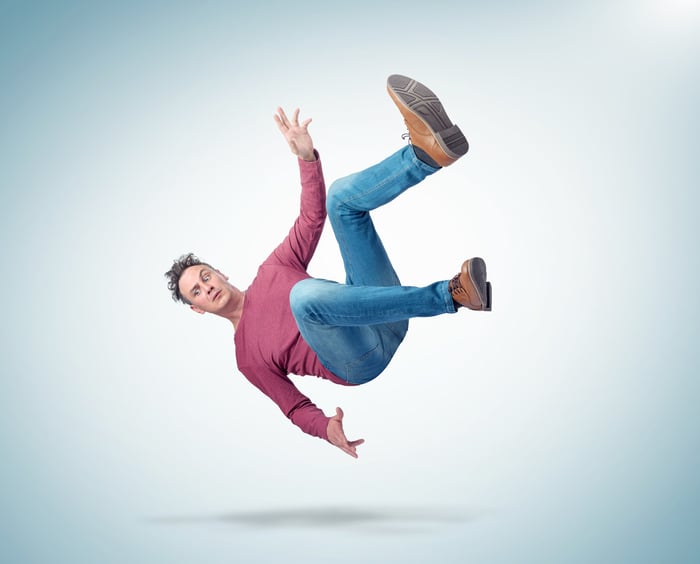 Shares of The Blackstone Group (BX) were down by nearly 3% at Monday's close. Declines are rare for the sprawling asset manager and financial conglomerate these days. It's been a very popular stock for quite some time.

The company, which has significant real estate investments, on Monday announced the latest in a long string of property deals. In this case, one of its affiliates has agreed to buy Colony Industrial, the industrial real estate portfolio of peer Colony Capital.

The announced price was $5.9 billion, and for that sum, Blackstone is getting plenty from Colony Capital -- 465 light industrial facilities spread across 26 states, including strategic major city or major city-adjacent locales such as Atlanta and northern New Jersey.

But Blackstone isn't the only real estate investor dipping into this sector. Most of the assets in the deal can service the so-called "last-mile" of the delivery process. This segment is popular due to intensifying competition for retailers to get their goods to customers quicker than the next guy (I'm looking at you, Amazon.com).

Even for a company with very deep pockets and enough connections in big finance to score relatively cheap funding, $5.9 billion is a lot to finance. Perhaps investors are concerned that Blackstone's coming a bit too hard and too late into the segment, and that (at this stage) the returns won't be high enough to justify the effort and expense.

They shouldn't be so concerned. Blackstone had, in fact, been relatively underinvested. It held a lot of cash in its coffers, and it was relatively light in terms of hard assets -- $5.9 billion is a big chunk, yes, but it's just a nugget if we consider Blackstone's nearly $550 billion in assets under management (AUM). It's also proven to be a very savvy investor at times.

All that said, this might be a good opportunity to take advantage of the share price dip, then.

Consumer goods stock Chewy (CHWY 2.80%), an online retailer of pet food and other products, took a bigger tumble on the day, as its stock price fell almost 6%. A research note written by Goldman Sachs and disseminated through the media is likely the source of the sell-off.

The investment bank took aim at companies with dual-class shareholder structures. This is the situation in which founding managers and investors -- in this case, pet supply retailer PetSmart -- hold a class of stock that carries outsize voting rights compared to the common shares the average investor has access to.

Goldman points out that numerous stock indexes -- such as the ultra-influential S&P 500 -- have bowed to investor pressure and started to exclude multiple-class stocks from being components.

Exclusion means these businesses can't tap into the flood of money gushing into index funds, which can put them at a disadvantage. And a lower share price can have numerous bad knock-on effects related to financing and various fundamentals.

Yet dual-share structures are becoming much more prevalent. Thus far in 2019, according to Goldman, 17% of initial public offerings (IPOs) have been by companies that have an elite, super-voting share class. In 2012, that figure was only 7%.

Chewy is one of 2019's IPOs that have dual shares. The company is heavily weighed down by its 10-vote-per-share Class B stock, with an outstanding share count roughly seven times higher than that of the one-vote-to-a-customer Class A stock (as of the immediate post-IPO period).

The debate about multiple-class stock structures is actually a fairly old one. Very roughly speaking, companies -- particularly in the tech sector -- support them, while investors do not. I tend to lean toward the latter opinion.

Aside from the dual-class stock issue, Chewy is also habitually unprofitable, despite encouraging revenue growth metrics and solid improvements in operational metrics. The company hasn't yet proven it can put a tighter leash on costs and flip to consistent profitability. So this price slide into bargain territory isn't enough to move the stock into "buy" territory.

John Mackey, CEO of Whole Foods Market, an Amazon subsidiary, is a member of The Motley Fool’s board of directors. Eric Volkman has no position in any of the stocks mentioned. The Motley Fool owns shares of and recommends Amazon. The Motley Fool has a disclosure policy.

Move Over Marriott, Starwood, and Hyatt... There's a New Kid on the Block

You Won't Believe Who the Largest Homeowner in America Is