Let's take a look at which one is the better buy today.

Alibaba is coming off a very strong second quarter which saw the company beat expectations for both earnings and revenue. The company's impressive sales growth of 42% was actually lower than the 61% that it was able to generate in the previous year. A highlight of the company's growth is the fact that the Chinese-based company was able to reach more customers. And despite having annual active customers totaling at least 674 million, there's still ample room to grow with China's population of just under 1.4 billion. 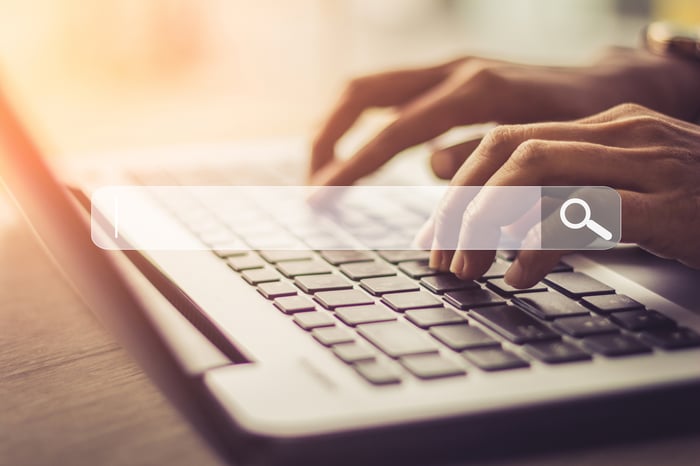 While it's not necessarily a big concern today, investors should keep in mind the potential impact that the Chinese government might have on Alibaba's growth potential. The ongoing trade war going on with the U.S. and China is also a potential risk factor, especially with the U.S. president reportedly looking at potentially delisting Chinese stocks from U.S. exchanges.

Its other potential risk is the retirement of CEO Jack Ma and what impact that could have on the company's direction. With Ma having helped lead the company to where it is today, there are some big question marks about how Alibaba will be able to perform in the future.

The CEO position is not one that investors should scoff at, as it can dramatically alter a company's direction. A good example of that is Apple (NASDAQ: AAPL). Although it's still an incredibly successful company today, it's been a much different company since the death of Steve Jobs, and one could argue that it hasn't had the same level of innovation as there was when Jobs was still running Apple. The departure of Ma could be the biggest wildcard in Alibaba's future, and that certainly adds a bit of uncertainty into the mix.

Alphabet: Slowing growth and privacy issues weigh on the stock

Alphabet was also able to beat expectations in its most recent quarter; however, sales growth of 19% is arguably nowhere near Alibaba's impressive numbers. Alphabet's sales numbers are also not what they once were -- in 2018, its sales were up 23.4% and were 22.8% the year before that. While growth percentages have been relatively stable, it may only get harder for Alphabet to stay above 20% as the company is generating $148 billion in sales over the past four quarters. Topping such astronomical figures gets progressively harder, and the uncertainty for Alphabet is whether it'll be able to find ways to improve its growth rate.

To its credit, the company has been looking at new ways to continue to grow, including focusing on cloud-related services. Along these lines, Alphabet recently acquiring Looker, a company that does data analytics, for $2.6 billion.

The cloud is one area that could help drive a lot of growth for Alphabet. The company currently expects to generate less than $10 billion in revenue annually from the cloud business, which is still a relatively small piece of the pie. However, that number could get a whole lot bigger as Google looks to expand its salesforce for that segment. The cloud is an area that investors will want to keep an eye on in future earnings reports, as it could play a big role in determining the strength of the company's overall sales growth.

Privacy issues are an area of concern -- the company is facing a fine of up to $200 million as a result of YouTube violating a law surrounding data collection with respect to children. That's on top of other recent government actions in the European Union and elsewhere to address alleged privacy infractions by the company. It's latest issue, according to Forbes, could result in the tech giant being be hit with a fine of up to $5.4 billion for General Data Protection Regulation violations in Europe.

A look at their valuations today

Both Alphabet and Alibaba are solid growth stocks with long track records that justify the labeling. And each is facing some uncertainty right now. That's why their relative valuations are key in determining which one is the better buy today.

Alibaba is currently trading at more than 47 times its earnings and nearly seven times its book value. By comparison, Alphabet's stock has a much more modest valuation, at a price-to-earnings multiple of around 25, more than four times its book value. Each company's share-price performances have been very comparable so far this year; Alibaba and Alphabet have both increased around 20%, with the former having a slight edge.

Both companies are solid investments. Overall, Alibaba certainly looks like it has a lot more potential growth given the opportunities in China to reach even more active users. However, the uncertainty Alibaba faces related to Chinese government interference, the recent Chinese economic downturn and the retirement of its founder, along with it trading at a much higher valuation, tips the scales back into Alphabet's favor.