Please ensure Javascript is enabled for purposes of website accessibility
Log In Help Join The Motley Fool
Free Article Join Over 1 Million Premium Members And Get More In-Depth Stock Guidance and Research
By David Butler - Oct 1, 2019 at 9:00AM

Micron (MU 2.21%) just had a tough end to its fiscal 2019. The chipmaker's fourth quarter involved huge fallout in revenues and heavy declines in operating margins as well as earnings. Management did express some optimism regarding "recovering industry demand," but one has to wonder how optimistic we can really be while trade disputes remain unresolved. Management's guidance for the first quarter of fiscal 2020 suggests continued year-over-year declines in earnings.

Just not there yet

Overall, the environment that semiconductor stocks are operating in is just tough. It's pretty evident that all the concerns surrounding demand and the competitive ramifications of tariffs were well founded. Micron's revenue streams are very much dependent on China, and ongoing uncertainty on this front creates a lack of reasonable forecasting for the company's sales. In the shorter term, Micron's first-quarter guidance for fiscal 2020 doesn't provide much upside sentiment. 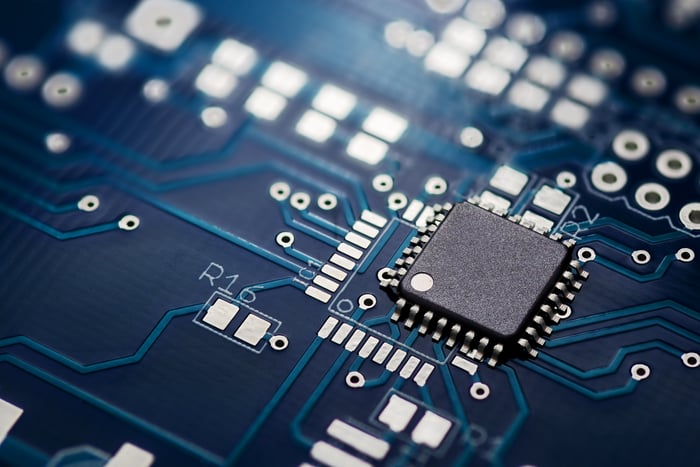 The chipmaker is expecting earnings in the range of $0.42 per diluted share. That would be another large decrease from fiscal 2019's Q1 earnings of $2.81 per diluted share. It's not super surprising given the stark shift in the industry. It also doesn't create much of a bullish case for Micron shares, and I think the stock's recovery over the last few months was a bit premature. The shares are cheap. That much is true, but where the next catalyst will come from remains to be seen.

The way I see it, the company is facing two challenges. One is the current supply situation within its industry, which doesn't seem to be letting up as quickly as investors might have hoped. The second is the trade war. The fight isn't done. There is still potential for it to get worse. I'll avoid the current ongoing politics within our nation, but if the Trump administration retains the White House for another term, there isn't much reason to believe that the tariffs will end unless China plays ball. Semiconductor companies like Micron are still in that line of fire.

Overall, I'm cautious on any company with such dependency on China for revenue. That's not a winning ticket right now, and I think we're going to see more uncertainty through the second half. Couple that with the weak guidance for fiscal Q1, and I don't see a lot to be excited about here.