Tuesday was One of Those Days that every investor endures sooner or later. Clearly in a deep funk, the market traded way down, submerging a great many stocks with it.

There were some glowing exceptions, though, including these two issuers. Let's see if we can tease out how this pair managed to break through the surface and take a little air. 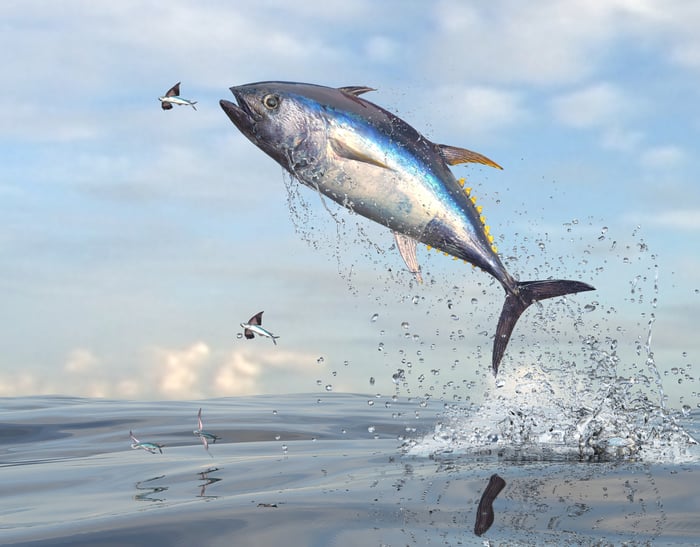 A company that can capture and hold market share in a lucrative niche, particularly one in the IT field, can be very appealing to investors. This is the dynamic that seemed to be at work in an otherwise uneventful day for tech stock Okta (NASDAQ:OKTA), the shares of which closed 5% higher on the day.

With no breaking news to trade on, it seems some investors were in port-in-a-storm mode. Okta is a good candidate for this, as it has a fresh and appealing business model centered around online identity management.

It has also overperformed in terms of fundamentals. Okta's revenue continues to rise at brisk rates, surpassing both the company's own expectations and those of analysts.

The customer list is growing, particularly with clients that sign contracts worth $100,000 or more annually. The number of such lucrative arrangements increased a rich 46% on a year-over-year basis in the latest reported quarter.

Okta isn't yet profitable, and it's likely to stay in the red for quite some time as it continues to ramp up its business. The company is playing the invest-now-profit-later game, which is admirable. It surely isn't easy to keep impatient investors at bay, convincing them to accept a series of losses in return for a successful future.

Even though it's some distance from their all-time high this summer, Okta's stock is still up a breathtaking 338% over its first day of trading in 2017. It says something about Okta that investors continue to pile into this not-yet-profitable company, even on heavily bearish days.

Okta isn't particularly cheap on the basis of valuations, but it's moving fast, it's moving well, and it's got an awful lot of potential. I think this stock remains a good buy.

Unlike the recently founded Okta, McCormick (NYSE:MKC) has had a longtime presence on the stock market. It's also been a mainstay in the grocery store and inside your pantry as one of the most durable spice and condiment makers on the scene.

It's a steady and often strong performer, too, notching frequent earnings beats.

The latest victory came today, with the company's unveiling of Q3 of fiscal 2019 results. These included a $1.46 non-GAAP (adjusted) per-share net profit that handily beat the average $1.29 estimate from analysts. Revenue didn't quite hit expectations, but it was still up (if marginally) from Q3 2018.

McCormick is nicely positioned to take advantage of the healthy-eating trend now sweeping across the world. Oftentimes, healthier food options are not as tasty as more traditional fare, so it's become more crucial to use herbs, spices, and other flavorings strategically. The expansion of food culture plays right into the hands of McCormick.

The company clearly believes this trend has some room to roam, as it upped its full-year earnings-per-share guidance (although its revenue projection received a bit of a haircut). On a down day for the market, it's empowering to witness such optimism.

McCormick is a favorite of many income investors, since it's a Dividend Aristocrat. It well exceeds the 25-year threshold for such stocks with an annual raise streak that goes back 33 years. The yield isn't the highest, at 1.4%, but much of this is a function of a rising share price rather than miserly management -- McCormick tends to be a generous raiser.

The increasing global interest in fresh food should remain a catalyst for McCormick, which, as ever, will be a nearly unavoidable presence in grocery stores. I would be a buyer of this stock, as I don't think today's nearly 7% pop will be an isolated incident.