Berkshire Hathaway, Alphabet, and McCormick could be perfect "set it and forget it" holdings for your portfolio.

With so many investors trying to score a quick buck in the market, it's refreshing to find those with the mindset of looking further out than the next quarter or the next year. In fact, not even a decade is long enough. Try five of them!

While not even Warren Buffett fully follows the rule that the best time to sell a stock is never, having businesses you could tuck away and essentially ignore for decades at a time is comforting. Not all companies are worth that sort of confidence, but Berkshire Hathaway (BRK.A -1.14%) (BRK.B -1.07%), Alphabet (GOOG -3.29%) (GOOGL -2.75%), and McCormick (MKC -0.57%) could be ones to fill the bill. 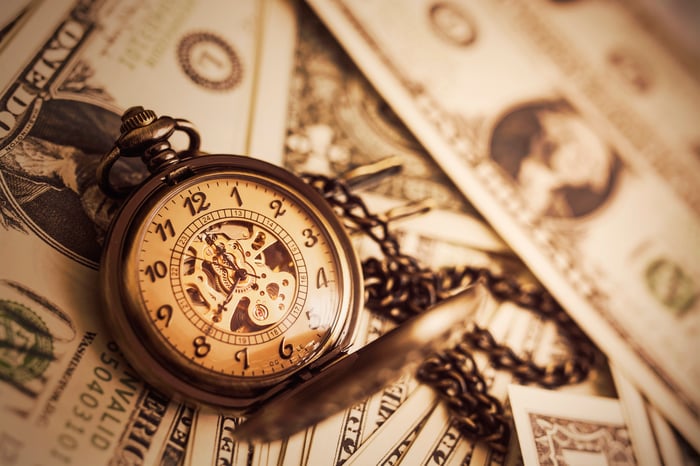 John Bromels (Berkshire Hathaway): With rapid advances in technology, changing geopolitical fortunes, and macroeconomic circumstances, it's tough to pick a stock to hold for five years, let alone 50! But if you're looking for a stock that allows you to "set it and forget it," it's tough to think of a better candidate than Warren Buffett's Berkshire Hathaway.

Berkshire's business model is pretty simple: generate piles of cash through its stable-but-boring core insurance businesses (it owns GEICO, among many others) and deploy that cash effectively by taking stakes in outperforming companies or simply buying them outright. This winning strategy has given Berkshire exposure to wide swaths of the market, including railroads (Burlington Northern Santa Fe), food service (Dairy Queen), chemicals (Lubrizol), and even underwear (Fruit of the Loom), all of which are wholly owned by Berkshire.

And although the 88-year-old Buffett isn't going to be around for 50 more years -- at least, probably not -- he has plenty of disciples within the company who share his investing philosophy and are likely to continue to keep his winning model, well, winning.

Berkshire has outperformed the S&P 500 over the past three, five, and 10 years, and it's roughly even with the market over the past year. And there are plenty of reasons to believe it will continue to do as well into the future.

You won't know this company as "Google" in 50 years, and that's OK

Anders Bylund (Alphabet): Picking stocks to hold for a very long time is a tricky business. Among the 30 Dow Jones components we see today, only 5 were on that list 50 years ago. And even then, three of those traded under different names back then, and one dropped out for nearly a decade.

But if I had to pick one stock today that my future grandkids might still appreciate half a century later, it has to be the Google parent we know as Alphabet.

The company was built on Google's groundbreaking search service, paired with an effective online ad service. These operations still account for more than 90% of Alphabet's total revenues. But that won't always be the case -- and Alphabet is ready to change with the times.

In fact, the company is more likely to drive these changes as an active innovator than to simply follow in someone else's footsteps. Over time, Alphabet should morph into a cross-industry conglomerate with a finger in every fast-growing and profitable pie its leadership can reach. Early ideas include the Waymo self-driving car company, Net's smart home products, and medical research hub Calico.

The only way to keep a single company prosperous for several decades is to face the changing market circumstances unafraid -- leading the revolution whenever possible. I don't see anyone doing this better than Alphabet, so this is an easy 50-year pick.

Rich Duprey (McCormick): Spice maker McCormick is a stock you could sprinkle on your portfolio to marinate for the next 50 years, as it gives investors a business that should do well in good times and bad.

Although its acquisition of French's mustard and Frank's RedHot Sauce in 2017 caused some heartburn, as it seemingly overpaid for Reckitt Benckiser's (RBGL.Y 1.51%) food division, the purchase has paid off. In its third-quarter earnings conference call with analysts last October, McCormick credited the brands acquired with driving half of the 290-basis-point gain it realized in gross margins. Chairman, president, and CEO Lawrence Kurzius said the sales growth and performance they've gotten out of the business is "uncannily close" to what the company modeled.

Analysts forecast McCormick will chug along with 11% earnings growth every year for the next five years, and investors can sit back and enjoy the $2.28 dividend that yields 1.6% annually. The seasonings specialist is a member of the Dividend Aristocrats, or companies that have consistently increased their payout to investors for 25 years or more. It boosted the quarterly dividend last November from $0.52 per share to $0.57, nearly a 10% increase.

McCormick stock isn't cheap, as it trades for 32 times trailing earnings and 26 times this year's estimates, but it is a solid consumer staple and should continue to perform well year in and year out for decades to come.