North American RV sales declined during the quarter, but the company should see healthier order flow by mid-fiscal 2020.

Global recreational vehicle (RV) giant Thor Industries (THO -2.82%) finished its fiscal 2019 year with signs of heightened 2020 activity in the tea leaves. The company enjoyed a top-line boost from its fiscal third-quarter 2019 acquisition of European RV manufacturer Erwin Hymer Group (EHG). While sales at core North American RV segments lagged behind, fourth-quarter results released Monday indicated that demand should tighten later in the new fiscal year. As we parse the details of the last three months below, note that all comparative numbers refer to the prior-year quarter. 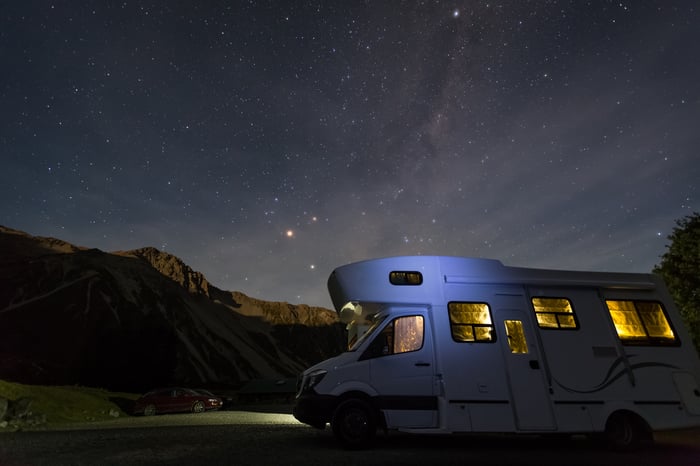 Our expansion into the European RV market represents a first step in our long-term goal of growing our business beyond North America and capitalizing on global growth opportunities. Our integration plan is proceeding, and we have made measurable progress in a number of areas. We are developing a culture of collaboration among our companies at the same time as we integrate EHG into the Thor family of companies. This collaboration will focus on near-term opportunities to adopt global best practices in purchasing to capture cost efficiencies, and sharing best practices in R&D and product development among our companies.

The CEO also mentioned that Thor anticipates transferring some of EHG's advanced production technologies to its North American subsidiaries to cut down on warranty costs and provide a higher-quality offering in the domestic and Canadian RV markets.

Thor has wrestled all year with dealer inventory rationalization in North America as retail RV sellers struggle to work down their lot inventories to better fit normalizing consumer demand following a monster year in 2018. The company relayed on Monday that dealer inventories have fallen 25% from their peak at the end of fiscal 2018 and are 6% below year-end fiscal 2017 levels. Thor's management believes that demand is picking up but warned investors that dealer adjustments are likely to continue through the first half of fiscal 2020. Thus, North American markets will experience a "flat to modest decline" in the near term.

This would represent a significant improvement over the double-digit sales declines in the towables and motorized segments in fiscal 2019 and likely boost the attractiveness of this consumer discretionary stock, given the implication of higher sales in the back half of the new year. Indeed, an improved outlook was one of the primary factors that juiced Thor's stock by more than 15% in Monday's trading session.