Here's a look at a few key items that will bear on investors' reactions to Thor's upcoming earnings release.

Thor Industries (THO -7.74%) has scheduled its fiscal fourth-quarter 2019 earnings release for Sept. 30 before markets open for trading.  It's been a difficult year so far in the recreational vehicle (RV) industry as retail demand normalizes from a significant surge in 2018. Thor's shares have managed to hold their ground and are down just 2% year to date. Will the manufacturer's upcoming report decisively shift this consumer discretionary stock into either positive or negative territory? Below, let's briefly address four things investors will be watching that will bear on this question.

1. Clues on the demand environment

In the fiscal second quarter of 2019, Thor began to curb its manufacturing activity, reflecting the ongoing rationalization of inventory on dealer lots, as retail sellers worked to adjust their vehicle counts to better match softer consumer demand.

In Thor's fiscal third quarter, sales reflected the difference in year-over-year RV demand: The company's towable segment sales slumped by 23% against record prior-year sales, to $1.24 billion, while sales of motorized RVs also fell by 23%, to $459.2 million.

Investors will scrutinize both towables and motorized sales this quarter to parse the demand trend in the final quarter of the year. While it's unlikely that the company will show a jump in year-over-year third-quarter sales, shareholders will welcome a modest gain or improvement from double-digit declines.

Thor completed its acquisition of European RV manufacturer Erwin Hymer Group (EHG) on the opening day of the fiscal third quarter. Thus, the company will report next week on a second complete period of results for the new "European RV" segment.

Last quarter, the European segment posted revenue of $768 million, which comprised about 31% of total company sales. EHG's vehicles enjoyed a healthy representation on dealer lots heading into the third quarter, which management believed was appropriate given seasonal consumer buying patterns. In addition to reporting on the sales that materialized over the last three months and associated segment margin, management will also likely discuss progress on the integration of EHG into Thor's legacy sales and operations systems. 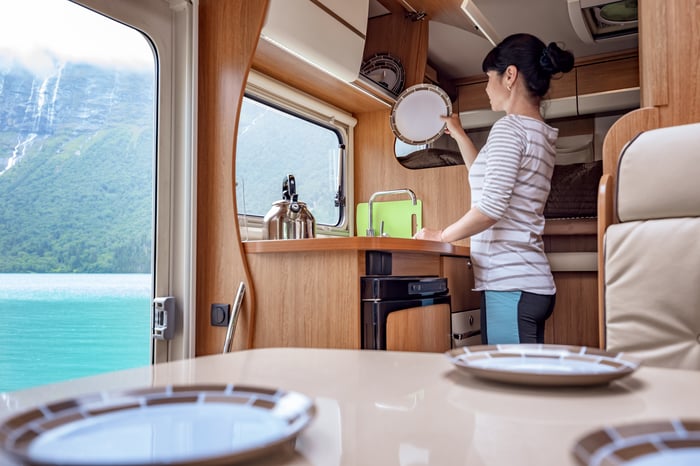 As I discussed in my earnings recap last quarter, just as dealers have whittled down excess inventory on their lots, Thor has sought to fine-tune both its inventory and order backlog.

The combination of weaker sales and the aforementioned self-imposed slowdown in production are helping Thor bring its own inventory in line with historical levels. This should help the manufacturer respond fluidly to any pickup in consumer sales (and consequently, dealer orders) in the coming quarters.

Thor enjoyed a huge backlog in fiscal 2018 during a record sales year, and at one point, backlog surged above $3.5 billion. As of last quarter, a backlog of $1.4 billion in the combined towables and motorized businesses, and $687 million of backlog in the European segment, represented a rough total of $2.1 billion in unfilled orders that management believes is close to an equilibrium level. Nonetheless, any material upswing in Thor's backlog in the third quarter would figure as a net support to current share price.

Last quarter, Thor's operating margin of 3% represented a 500-basis-point drop from the prior-year quarter. The company incurred acquisition costs related to the EHG merger of $74.8 million, which accounts for roughly 300 basis points of the decline. The rest of the lowered profitability was due to margin compression from the weaker towables and motorized RV segment sales.

This quarter, shareholders will look for sequential improvement in operating margin, as costs from EHG will be related more to integration than to acquisition. A healthier sales level will be the single most important lever in bringing operating margin to the mid- or high single-digit level. Shareholders will look favorably on any resumption of beefier margins, yet another quarter of subpar profitability will potentially weigh on Thor shares when the manufacturer reports on Monday.