Samsung (OTC: SSNLF) and Apple (NASDAQ:AAPL) are the No. 1 and No. 3 smartphone brands by global units sold, respectively -- though Apple's premium brand allows it to take home the lion's share of the industry's profits.  As the smartphone is perhaps the most important technological device so far this century, most investors know these two large-cap companies as it relates to this intense rivalry.

Yet while most consumers view Apple and Samsung as smartphone companies, it may actually be the other parts of each company's business that most defines and distinguishes them. Therefore, if you're thinking of buying stock in one of these two market leaders, you need to understand their nonsmartphone businesses. That will help determine which stock is the better buy for your portfolio today.

Perhaps the most important distinction between these two companies is that Apple is much more of a consumer brand and ecosystem, whereas Samsung is more of an industrial conglomerate with large economies of scale.

What most distinguishes Apple is its growing services division. As you can see, its services, which include Apple Care, Apple Music, iCloud, and commissions from the App store, garnered just over 20% of revenue last quarter and grew almost 13% year over year. Within that revenue base are also about 420 million recurring paid subscriptions, which the market tends to value higher than hardware. As services and subscriptions grow as a percentage of Apple's overall revenue base, the company could begin to garner a higher multiple in the market.

However, Apple is set to unveil even more services this year, with four major new services just hitting, or about to hit, the market: Apple News+, Apple Arcade, the Apple credit card, and Apple TV+. These four new services have the potential to greatly augment Apple's services contribution going forward.

In addition, CEO Tim Cook is also quite bullish on Apple's healthcare initiatives. While health monitoring isn't a big moneymaker as of yet, Cook has said that years from now, Apple may be best known for its contribution to health services, even more so than its phones. 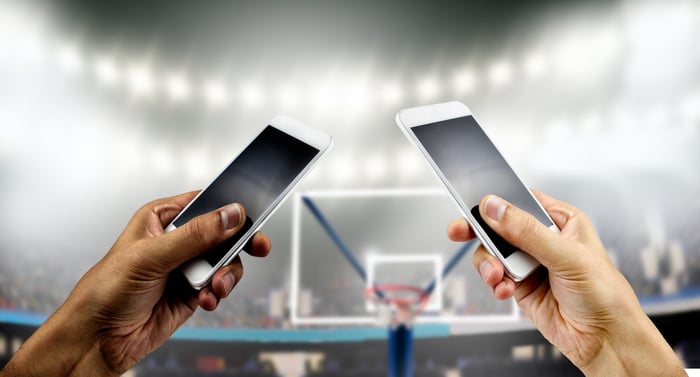 The Apple-Samsung rivalry is about more than cellphones. Image source: Getty Images.

Samsung is Korea's largest company, a sprawling conglomerate spanning phones, consumer appliances, and, most importantly, memory and semiconductor chips. As you can see, smartphones aren't even Samsung's main profit center.

While nearly half of Samsung's revenue comes from the mobile segment, it accounts for just under a quarter of Samsung's operating profits. The numbers are effectively reversed for Samsung's semiconductor business. Not only that, but the semiconductor industry is currently in the midst of a nasty downturn. Thus, the above results could be greatly underrating the importance of memory chips to Samsung's overall fortunes.

Therefore, Samsung's profits are much more tied to the wildly cyclical DRAM and NAND flash markets, which are subject to booms and busts than they are to smartphones. This usually causes Samsung to earn a lower valuation multiple than Apple. While Apple's hardware, especially the iPhone, is subject to its own cycles, they are not nearly as severe as Samsung's semiconductor business.

Though both stocks trade below overall average market multiples due to their reliance on hardware, which Wall Street values lower than software, Samsung is clearly cheaper Apple. However, both companies have excellent balance sheets and also pay out healthy dividends to investors.

Apple's valuation may also benefit from the fact that it is a bit more shareholder-friendly than Samsung. For instance, Apple has been very aggressive in repurchasing its own shares, while Samsung only bought back a tiny portion of stock in 2018, a "boom" year for semiconductors, and hasn't bought back any stock in 2019. This may be due to the controlling ownership by the Lee family. In addition to hoarding cash at the corporate level, the Lees have also added a huge amount of complexity to Samsung's ownership structure, through complicated circular ownership of Samsung's many separate (but controlled) subsidiaries.

Meanwhile, Apple has been the epitome of shareholder-friendliness, returning a whopping $50 billion to shareholders via buybacks, or about 5% of the current market cap, over the past nine months alone. Apple is also planning to return even more, with the clear, stated goal of becoming cash neutral (cash equal to debt) over time. The capital allocation policies have earned plaudits from none other than Warren Buffett, who has made Apple his largest public equity position.

Samsung is for high reward, Apple for lower risk

I think both companies are currently excellent values, but investors with a lower risk tolerance should probably opt for Apple. The company's results are less volatile, and its corporate governance is much, much better.

In addition, it is also somewhat difficult to trade Samsung's stock. There are no approved global depositary receipts (GDR) on U.S. exchanges -- Samsung GDRs are only listed on the London Stock Exchange (LSE), though many U.S. brokers have access to the LSE. You may also trade Samsung directly on the Korea Stock Exchange, the KRX, but to do so, you may have to open an account with a Korean broker or a specific affiliated bank.

However, assuming you are willing to endure the trading headaches and cyclicality in Samsung's business, its shares do appear to be a compelling value right now. But so are Apple's, and owning Apple is a much more stress-free experience.