Please ensure Javascript is enabled for purposes of website accessibility
Log In Help Join The Motley Fool
Free Article Join Over 1 Million Premium Members And Get More In-Depth Stock Guidance and Research
By Daniel B. Kline - Oct 2, 2019 at 5:19AM

The leading supermarket chain is testing the European dining concept at a new store near its headquarters.

In the world of brick-and-mortar retail, the bar keeps getting higher. People don't even have to leave their homes to shop for groceries anymore. It's easy and inexpensive for most Americans to place online orders for delivery, or they can split the difference, do their shopping from the couch, and run out briefly to retrieve their food via curbside pickup.

For the supermarket chains that want to lure customers into stores, it all means that they have to work a bit harder to give folks reasons to visit.

What people remain quite willing to do, however, is leave the house to eat (even though food delivery options are on the rise, too). That's why Kroger (KR -0.17%) has decided to test a new option to lure hungry customers -- a European-style food hall. 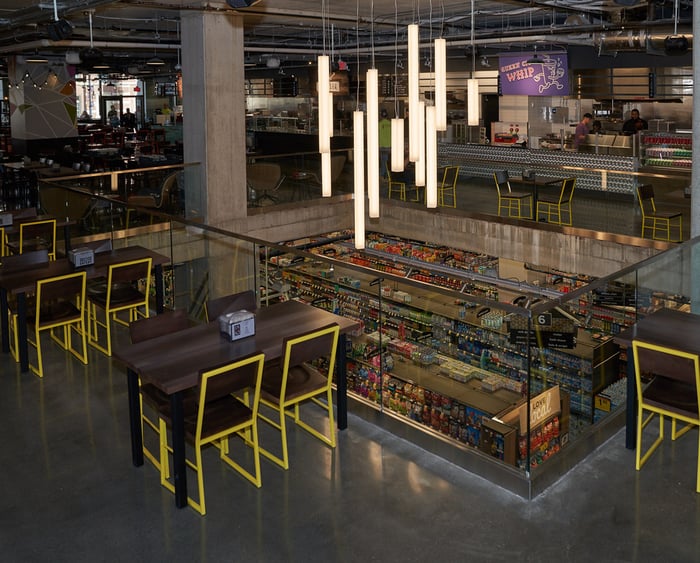 The food hall is the first of its kind from the grocery chain. Image source: Kroger.

What did Kroger build?

The supermarket giant has added a second-floor food hall to the second floor of its new 52,000-square-foot store in downtown Cincinnati. Called On the Rhine, it features booths run by a number of local restaurants including Django Western Taco, DOPE! Asian Street Fare, Eli's BBQ, and Queen City Whip, as well as Kitchen 1883 Café and Bar, Kroger's American food restaurant concept.

In addition to a 200-seat dining area for those who want to eat on-site, the food hall offers ready-made "grab-and-go" meals. The new store also has a Starbucks housed on the first floor with a beverage window -- a design intended to quickly serve walk-up customers.

The new Kroger -- located just a block from corporate headquarters -- occupies the first two floors of an 18-story building that is otherwise residential. That location choice gives both the store and the food hall experiment a bit of a leg up, given that hundreds of potential customers literally live right on top of it.

Kroger Senior Director of Grocery Development Teri Rose implied that it's a prototype for potential locations elsewhere. "Cincinnati is Kroger's hub for culinary innovation and experimentation, and the food hall is an example of the types of concepts and ideas we're creating every day," she said.

Kroger isn't the first grocery chain to bring outside restaurants within its walls, but this may be the practice's most expansive example. Whole Foods had local eateries embedded in its 365-branded stores -- all of which were converted into regular Whole Foods locations earlier this year after Amazon gave up on that lower-cost experiment. The parent chain still has company-owned restaurant concepts in some of its stores, along with extensive in-store eating options.

Food halls are a growing trend both in underused spaces (like converted warehouses) and within malls, where they are filling spaces vacated by major stores. They make popular options for established retail centers because they allow people a new dining option in a place they were likely to visit anyway, and also offer lots of choices.

But while malls have always offered restaurants and food courts, grocery stores haven't. That means that Kroger faces the added  challenge of letting people know the food hall is there, and that it contains a variety of dining options beyond the typical fare they might expect.

Realistically, getting the word out shouldn't be too hard for Kroger when it comes to a highly trafficked downtown location. What the company -- and investors -- will have to wait to discover is whether the convenience of what is essentially an upscale food court drives repeat visits, and whether it increases sales on the grocery side.

But the two-for-one proposition of a better-than-typical grocery store meal combined with the still-often-necessary task of getting the shopping done should help the chain keep some customers from turning to delivery-based options -- at least some of the time.