Ford slumps after a weak sales report, and Delta tumbles as costs rise more than expected.

Wednesday was an unpleasant day on Wall Street, as a weak jobs report compounded with a weak manufacturing report released on Tuesday to drive big declines for all the major indices. Recession fears are clearly ramping up, and for good reason.

Shares of Ford Motor Company (F -2.78%) and Delta Air Lines (DAL -1.60%) performed even worse than the broader market, with a weak sales report and a guidance update weighing on the stocks.

Following reports of steep U.S. sales declines from Japanese automakers, Ford reported some rough numbers of its own on Wednesday. Total vehicle volume dropped 4.9% year over year in the third quarter, with strength in trucks more than offset by lower sales of SUVs and cars. There were some silver linings, but not enough to stop the stock from falling 3.9% by 1:25 p.m. EDT. 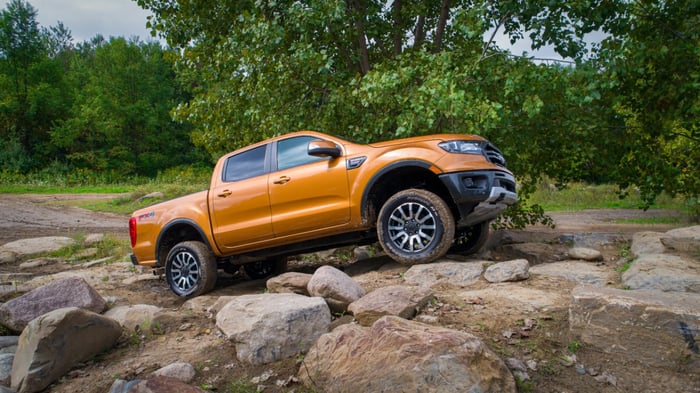 The truck category benefited from the Ranger, which returned in 2019 and sold around 26,200 units in the third quarter. This helped offset a 6% decline in F-Series sales. In the SUV segment, Explorer sales tumbled 48% due to limited inventory.

Because sales shifted hard away from cars, Ford's average transaction price jumped $2,200 to $37,900 per vehicle. Trucks and SUVs accounted for 87% of vehicle volume, up five percentage points year over year.

This shift toward pricier vehicles will be good for the bottom line, but exactly how the market for expensive SUVs and trucks will fare during the next recession is unclear. And if the third quarter is just the beginning of a prolonged sales slump, Ford stock may not recover anytime soon.

Delta expects to produce solid revenue growth in the third quarter, but investors were spooked on Wednesday when the airline warned about higher costs for the rest of the year. Shares were down 6% at 1:25 p.m. EDT.

Revenue is expected to grow by 6.5% in the third quarter, driven partly by a 2.5% improvement in unit revenues. This outlook is unchanged from Delta's guidance issued in July.

What has changed is the cost picture. Non-fuel unit costs are now expected to rise by 2.5% year over year in the third quarter, up from an original outlook that called for a 1% to 2% increase. The additional costs are being driven by employee costs, passenger volume growth, and weather.

For the full year, Delta expects non-fuel unit costs to be up 2%, driven by the same factors, as well as changes to actuarial assumptions and maintenance timing.

Third-quarter adjusted earnings per share will still grow by around 25% year over year despite these cost increases, so this guidance update is far from a catastrophe. But with recession fears ramping up, investors are clearly concerned about the longer-term story.