Even with its recent pullback, Shopify (NYSE:SHOP) investors who have held the stock for more than a year have been seen their shares almost double. When Chief Product Officer Craig Miller announced this e-commerce platform's game-changing fulfillment network on the main stage at the company's conference called Shopify Unite 2019, there was a lot of investor excitement and Shopify's shares rallied.

But shareholders may have missed the smaller session at that same event where Chief Financial Officer Amy Shapero delivered her investor day presentation in which she covered important details about the Shopify Fulfillment Network, from project execution to its corresponding financials and merchant benefits. Here are the five key takeaways for investors and how merchants are responding.

1. It's still under construction

At the end of his announcement, Miller said "we have now completed our beta and are now starting to provide early access [to the network]." The early access program will allow management to hand-select merchants to add demand in a controlled manner. Even though it's "open for business," it's important to understand it's not yet ready to move to full-scale volume. 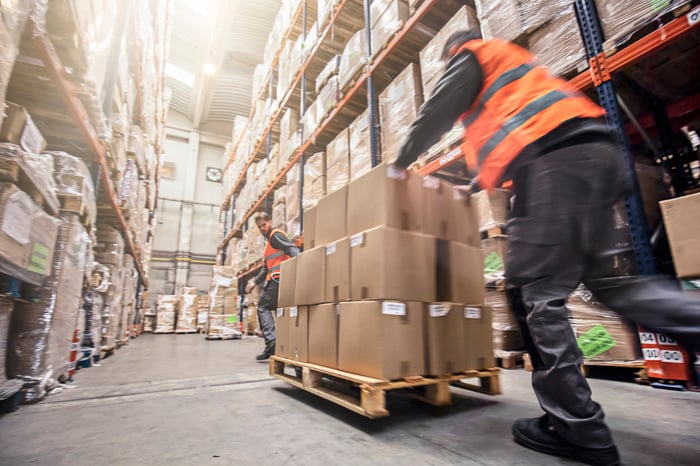 Shapero explained the current state of the project in the "product-market fit" phase with a timeline of 2019 to 2020, "and possibly into 2021." This involves "building the brain" and "3PL [third party logistics providers] partnerships." The partnerships will help build warehouse management systems and provide physical warehouse locations.

Rome wasn't built in a day, and neither is a high-volume multi-warehouse scalable fulfillment architecture. Nor is it built without significant investment.

The CFO laid out the costs of building this capability.

Shapero said the spending on the scale-up will be "success-based." The network will have to achieve functionality and demonstrate the ability to maintain high-performance expectations before more money will be released to add capacity. This is a really smart way to control the growth and ensure a great merchant experience.

Shopify has always been a merchant-first platform, striving to make the e-commerce entrepreneur's job simpler in every way.

The executive leading this effort, Thomas Epting, joined Shapero on stage and covered details about how this solution will address merchant pain points. He said the network has built-in integration to its platform, simple and competitive pricing, contracts that make sense, access to big-company shipping rates, and machine-learning informed inventory strategies that keep storage rates low. The merchant gets all of those benefits along with fast and accurate shipping. Perhaps the biggest benefit is the end-customer won't even know that Shopify is involved; the seller is able to keep its own branding on shipping labels, boxes, and paperwork.

When comparing to Amazon's (NASDAQ:AMZN) third-party seller process, Shopify's merchant-first approach is an important distinction. Because Amazon is customer-obsessed, sellers on its platform need to follow strict rules in order to "fit in" to the e-commerce giant's high-velocity fulfillment process. A merchant's brand gets hidden through this process and sellers may even end up competing for sales against Amazon's private label brand. That's not the case with Shopify's merchants.

4. It has no internal goals or measures of success

It seemed like an obvious question: How will you know if the program is successful? But CEO Tobias Lutke provided a surprising response; "I'll know it when I see it... it's got to be hard to quantify right now."

He explained that while teams can be successful when trying to reach target goals, it can often have the unintended consequence of leaving "scorched earth all around the particular blast zone of a single metric." Lutke is staying away from specific goals and relying on customers to let them know how it's going -- and historically they have. "When we do something [poorly] our customers tell us about it," he said.

Existing merchants won't make the effort to switch their fulfillment providers if the solution is not better and cheaper. The leaders of this e-commerce platform company know this and are already making improvements.

5. It's inviting the robots to join the party

In September, Shopify announced the acquisition of 6 River Systems for $450 million, which provides an end-to-end collaborative robot solution for warehouses. This deal will help the network to scale up more efficiently and allow 6 River to continue selling its solutions to outside customers, providing incremental revenues along the way.

Buying a fulfillment-robot expert is a smart move for a number of reasons. It will allow tight collaboration between software developers and robot engineers for a more effective solution. It adds talented industry expertise to its staff and creates focus by standardizing on one robot operating system.

The bottom line: Are merchants signing up?

The Shopify Fulfillment Network seems to have hit on a big frustration-point for its customers. Fast-forward six weeks later to the most recent earnings call, Shapero shared that "thousands of merchants have expressed their desire to be a part of our early access program" and that it plans to "accelerate investing so we can move fast and execute on this opportunity for our merchants."

It looks like this billion-dollar bet is likely to be another winner for Shopify and its merchants.