Shares of Dick's Sporting Goods (NYSE:DKS) were scoring again last month as momentum from its second-quarter earnings report in August combined with a market rotation into value stocks to drive the stock higher.

According to data from S&P Global Market Intelligence, the stock finished September up 20%. As you can see from the chart below, it gained over much of the month. 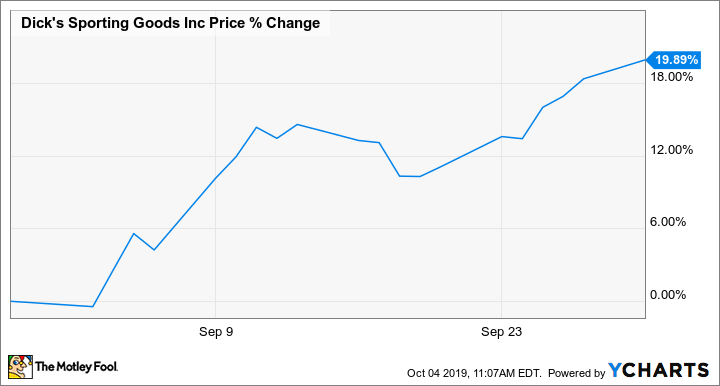 Sometimes it takes a while for investors to react to an earnings report. On Aug. 22, Dick's posted strong second-quarter numbers with comparable sales up 3.2%, its biggest increase in comp sales since 2016. Earnings per share also rose from $1.20 to $1.26, helped by aggressive share buybacks, and the company hiked its full-year EPS guidance from $3.20-$3.40 to $3.30-$3.45. 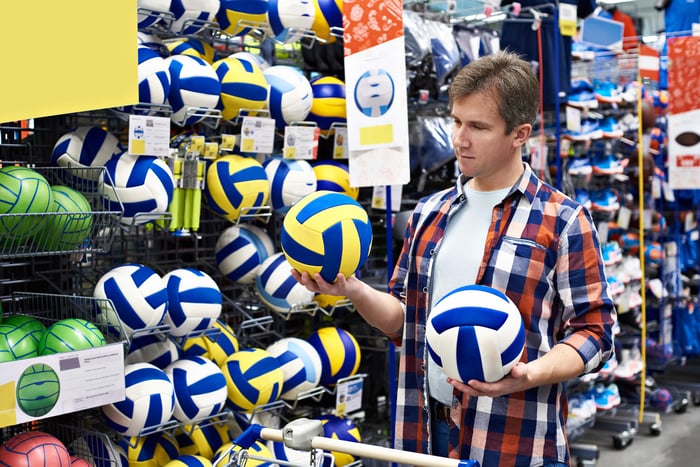 The stock rose 3.6% the day of the earnings report, but gave back those gains the next day. However, a rally formed in the stock in September as investors started to give value stocks a second look. In particular, retail stocks like Dick's surged on Sept. 9 during a sudden market rotation out of growth stocks and into value stocks. Dick's shares rose 5.7% that day, and climbed 10.7% that week.

The gains in the stock may also have been helped by Walmart's decision in the beginning of the month to limit sales of guns and ammunition following a mass shooting at one of its stores. Dick's had made a similar decision earlier and stirred up controversy because of it, but Walmart's move seemed to signal that Dick's did the right thing and takes the spotlight off the sporting goods retailer.

At a time when a number of retailers are slashing their store footprints, Dick's is actually adding stores, a sign it's confident in its omnichannel strategy as it also saw 21% e-commerce growth in the second quarter. The company announced two new store openings in the beginning of September and another seven at the start of October, which will open by the end of the month in time for the holidays.

At the same time, the company said it would sell eight of its Field & Stream stores to Sportsman's Warehouse, a sign that it is continuing to reduce its exposure to guns and hunting.

There are reasons to be cautious about Dick's given the general state of the retail industry and that its margins are still compressing, but the company is clearly moving in the right direction. Keep your eye on comparable sales to see if its momentum keeps up.