Please ensure Javascript is enabled for purposes of website accessibility
Log In Help Join The Motley Fool
Free Article Join Over 1 Million Premium Members And Get More In-Depth Stock Guidance and Research
By Anne Burdakin - Oct 5, 2019 at 6:00AM

Accuray and Stereotaxis are hyper-focused on growth.

Healthcare advances have come fast and furious over the past 25 years.

One groundbreaking step forward was the introduction of robotically assisted surgery, pioneered by Intuitive Surgical (ISRG 2.13%). Its da Vinci system, cleared by the U.S. Food and Drug Administration in 2000, brought minimally invasive surgery and quicker recoveries to patients worldwide. 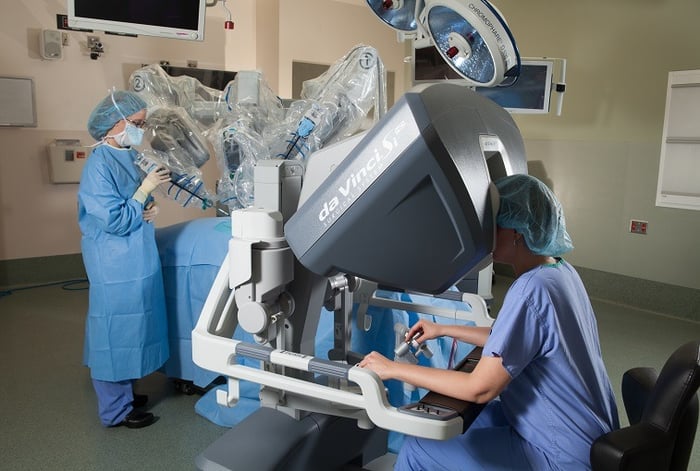 Today, Intuitive has sold almost 5,000 units worldwide, which have performed over 6 million surgeries. The stock price is up 9,000% since 2000. And the company continues to innovate and provide stellar returns for investors.

According to iData Research, just under 900,000 robotic-assisted surgeries were performed in the U.S. last year. The company asserts the robotic surgery market is expected to grow impressively to 3 million U.S. procedures annually by 2025, presenting interesting investment opportunities.

Accuray developed the CyberKnife and Radixact image guidance and robotic controlled systems to deliver high energy radiation to tumors with sub-millimeter accuracy. The systems are FDA approved to treat multiple types of cancer and tumors throughout the body wherever radiation therapy is applicable.

Despite facing intense competition -- particularly from Varian Medical Systems (VAR) -- in the radiation-oncology space, Accuray reported good fourth quarter fiscal 2019 results. The company beat on revenue by 3%, but missed on earnings per share by $0.04.

The revenue beat reflects Accuray's focus on expanding its installed base and its strong international growth. There were eight orders from China in the fourth quarter fiscal 2019 totaling $19 million, and management expects continued strong growth in China in 2020.

But success in China has turned out to be a double-edged sword, thanks to Chinese tariffs. Fiscal 2020 revenue from Europe, Japan, and the U.S. are forecast to grow modestly. But Accuray management was forced to slash revenue guidance by 1.5% due to the trade war and tariffs.

Accuray's financial momentum has been stopped in its tracks. The company will continue international growth and upgrades, but until trade war issues are resolved, investors should steer clear. The fog will clear eventually but for now, the stock price will remain flat.

The second quarter was an exciting period for Stereotaxis and a pivotal turning point in our effort to reestablish a long-term growth trajectory. With the financing announced today, Stereotaxis has the financial strength to accelerate the development and commercial introduction of these innovations, as well as to fund a second wave of innovations in electrophysiology and beyond.

The company's August 9, 2019 press release said: "Without considering the financing, Stereotaxis would have reiterated its expectation to end 2019 with greater than $6.0 million in net cash and to reach profitability without the need for additional capital."

Fischel was brought in to turn the company around in 2017 when debt threatened corporate disaster. Fischel saw promise and got to work recapitalizing Stereotaxis and ramping up research and development.

Today Stereotaxis is poised to break out with cutting-edge technology and the capital to expand markets. Aggressive investors should consider adding Stereotaxis to their portfolios now. Other investors should watch developments closely as this is likely a stock ownership opportunity.

The future of robotic surgery in general is very promising. The technology allows for smaller incisions, greater accuracy, and faster patient recovery times. It doesn't eliminate the physician; it greatly enhances the knowledge and skill of the physician.

We are increasingly seeing smaller niche robotic surgery device companies being acquired by larger medical device companies to round out their offerings. But we are a long way off from seeing overlapping innovation.

Many investing opportunities are available in this market segment involving varying levels of risk. Between Accuray and Stereotaxis the better buy today is Stereotaxis.