Please ensure Javascript is enabled for purposes of website accessibility
Log In Help Join The Motley Fool
Free Article Join Over 1 Million Premium Members And Get More In-Depth Stock Guidance and Research
By Daniel B. Kline - Oct 5, 2019 at 2:16PM

Or maybe the restaurant chain is just bringing something to beverage marketing that it pioneered in food.

Starbucks (SBUX -1.84%) has a robust lineup of seasonal beverage offerings. Some, like the pumpkin spice latte, come back every year; others may jump around the calendar or never be brought back again. It's a strategy that engages customers because these are limited-time offers (LTOs). Get them now or miss them for another year -- or maybe forever.

McDonald's (MCD -0.01%) pioneered this strategy in its food business. A novelty sandwich might be offered tied to a promotion, an event, or a season. Other LTOs have included the famed McRib, a sandwich that gets brought back to select locations randomly, and the McLobster, which has primarily been a summer offering in the Northeast.

Now, McDonald's has launched its first McCafe LTO in nearly five years. It's a smart play that breathes life into an area that the company has focused on, but which perhaps hasn't thrived as much as franchise owners would like -- especially after investing in the coffeemaking equipment. 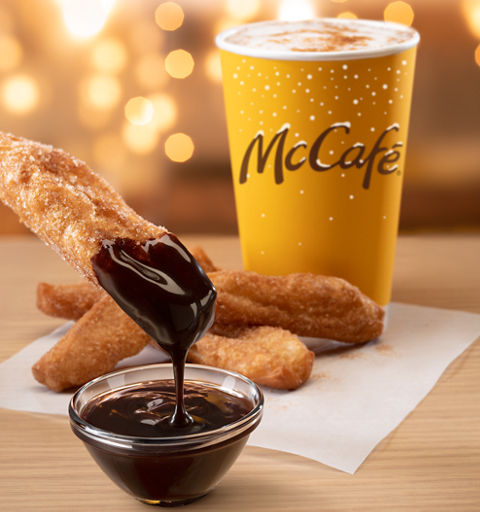 McDonald's has released a new seasonal McCafe drink, along with a chocolate dipping sauce for its Donut Sticks. Image source: McDonald's.

Trying to lure McFans to McCafe

McDonald's has added the McCafe Cinnamon Cookie latte as a seasonal LTO. And it has brought back McCafe Donut Sticks, which were popular in their earlier run, this time adding a chocolate dipping sauce. They may seem like minor moves, but they are part of a broader plan to increase sales by changing the behavior of its customers.

A Starbucks customer, for example, might regularly visit in the morning. But a seasonal offer or time-based pricing deal could bring that customer in for an added visit. That's behavior McDonald's wants its customers to emulate, while also adding new visitors, according to CFO Kevin Ozan's remarks in the company's second-quarter earnings call.

"The convert strategy for us was always around opportunities in either other dayparts or other areas that we didn't have our fair share if you will," Ozan said. "So areas like coffee and snacking and areas that are potential further growth opportunities but we are not as strong in some of those areas, that wasn't necessarily taking some of our existing customers and just having them come more frequently. So there still are opportunities in some of those areas, again, like coffee and snacking."

The fast-food giant does not have to become Starbucks and offer a long list of LTOs. It should, however, continue to sprinkle some in, if only to receive the media attention that comes with them.

McCafe has the potential to be bigger than it is and drive revenue for the company. To make that happen, McDonald's needs more customers to think of it as a stand-alone cafe brand, a Starbucks alternative. Offering an occasional LTO might help make that happen.

Starbucks has also shown that if a drink becomes popular, its release each year can become an event. That's a phenomenon McDonald's knows well from its Shamrock Shake, which has perhaps fallen in popularity in recent years but has been a long-time seasonal menu addition.

This is a toe in the water, but a necessary step to get consumers to change their patterns. One LTO probably won't move the needle much; one or two each quarter, however, might get customers to start looking for them. Ultimately, that could increase traffic in slower times of day, which is the easiest way for McDonald's to raise sales in a meaningful way.