Please ensure Javascript is enabled for purposes of website accessibility
Log In Help Join The Motley Fool
Free Article Join Over 1 Million Premium Members And Get More In-Depth Stock Guidance and Research
By Leo Sun - Oct 5, 2019 at 8:30AM

The tech giant returns to the smartphone market with a baffling dual-screen device operating as an Android phone.

Microsoft (MSFT 0.23%) recently unveiled its first Android phone, the Surface Duo, in a surprising return to the smartphone market. Unlike most phones, the Duo sports two 5.6" screens, which fold out into an 8.3" display. There's no rear camera -- users fold the device backward and use the front-facing camera for forward-facing shots.

The Duo runs a standard version of Android with Alphabet's (GOOG 0.71%) (GOOGL 0.39%) Google Play Store installed, but it also comes with a suite of Microsoft's cloud-based Android apps, including Office, Outlook, and OneDrive.

The Duo is the smaller sibling of Microsoft's other new dual-screen device, the Neo, a Windows 10 device that offers two 9" screens that fold out into a 13" display. The Neo can also be converted into a laptop with a keyboard add-on that covers most of the second screen. 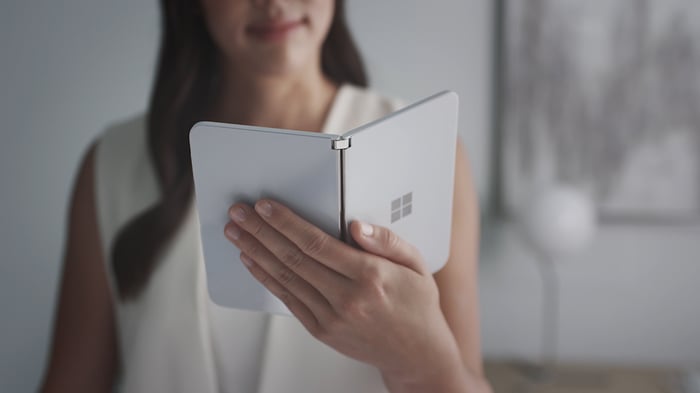 The Neo might appeal to Windows users who like the Surface, but the Duo targets a narrow niche of smartphone users who want a dual-screen device. Let's see why Microsoft launched the Duo, and why this so-called "Surface Phone" could struggle to gain ground in the crowded smartphone market.

Not a fresh idea

None of these devices caught on, for three simple reasons: They were pricier than single-screen phones, mobile apps weren't optimized for dual-screen displays, and the screens were bisected by unsightly bezels.

Microsoft likely thought that a Duo with a single foldable screen would be too costly to produce, so it stuck with the older dual-screen design. That could be a bad move -- previous dual-screen devices flopped because they were considered awkward, impractical, and gimmicky. 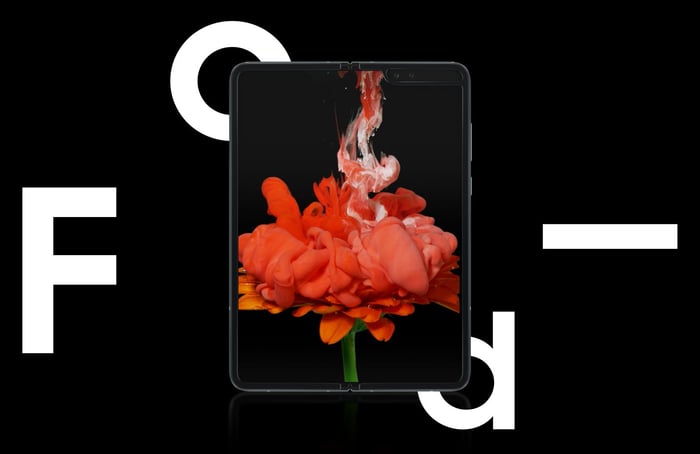 Over the past few years, Microsoft phased out Windows Phone and the Lumia brand it acquired from Nokia. At the same time, it expanded its Surface brand into a full line of 2-in-1 devices, laptops, all-in-one PCs, and a wall-mounted interactive whiteboard. This was a smart move because it showcased the versatility of Windows 10 while sparking a form factor revolution in the stagnant PC market.

Microsoft's devices revenue, which mainly came from Surface products, rose 19% to $6.1 billion last year and accounted for 5% of its top line. With the Duo, Microsoft is trying to leverage the strength of the Surface brand to return to the smartphone market.

Instead of trying to expand its own OS again, it's wisely sticking with Android but pre-installing its own mobile apps. To differentiate itself in a crowded market, it's offering a dual-screen device. Those strategies are logical, but the Surface Duo faces an uphill battle, for three simple reasons.

First, global smartphone shipments fell 4% last year, according to IDC, and are expected to dip again this year. That shrinking market makes it tough for any newcomers, even ones as large as Microsoft, to gain ground against market leaders like Samsung, Huawei, and Apple.

Second, Microsoft plans to launch the Duo in late 2020, and its price has yet to be determined. By then, Samsung, Huawei, and other OEMs could launch cheaper foldable-screen devices and render the Duo obsolete. Lastly, Microsoft will struggle to convince consumers that they actually need a dual-screen device when most apps are optimized for single displays.

Microsoft wants to blur the line between laptops and mobile devices with the Duo, but it just looks like two Android phones folded together. Therefore, it should remain a niche device which won't gain much traction in the mobile market -- unless Microsoft somehow rallies developers to create compelling dual-screen apps.