Shares of iQiyi (NASDAQ:IQ), the Chinese video streamer, were getting dumped last month on a broader sell-off in Chinese stocks after the trade war flared up again at the end of the month. According to data from S&P Global Market Intelligence, iQiyi shares finished the month down 12%.

It was a volatile month for the company sometimes referred to as the Chinese Netflix. The stock had gained 8% at one point, but shares fell sharply the last week of September, when President Trump stepped up threats on China. 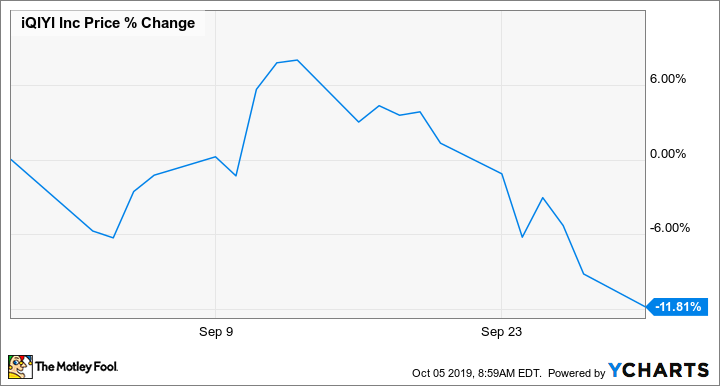 iQiyi stock has been volatile since its IPO last year. Investors initially bid up the stock on hopes of a Netflix-like boom, so it's not surprising to see the stock continuing to swing back and forth. The biggest day of the month came on Sept. 11, when shares rose as much as 12% and finished the day up 7% on high trading volume, though it wasn't clear what pushed the stock up. The company issued a press release about developing new specifications for interactive video, representing a new kind of content for the company.

Later in the month, however, the stock gave up those gains and then some. On Sept. 27, iQiyi shares lost 4%, again on heavy volume, after reports emerged that the Trump administration was thinking about delisting Chinese stocks from U.S. exchanges, essentially blocking them from American investors. Not surprisingly, Chinese stocks fell broadly following the news, though a full delisting seems unlikely, given the protests of investors and the difficulty of unwinding current investments.

With trade talks between the U.S. and China set for this week, iQiyi stock could move again. Though markets have been hopeful of a detente between the two economic superpowers, the political climate has become even stranger with the looming impeachment inquiry of President Trump. Expect iQiyi and other Chinese stocks to swing one way or another on news from the talks.