Please ensure Javascript is enabled for purposes of website accessibility
Log In Help Join The Motley Fool
Free Article Join Over 1 Million Premium Members And Get More In-Depth Stock Guidance and Research
By Rich Duprey - Oct 6, 2019 at 10:05AM

The pizza joint is expanding its program to 1,000 locations by January.

Few things go together as well as beer and pizza, which is likely why the Yum! Brands (YUM -1.33%) beer delivery program for its Pizza Hut chain is such a success.

It started out as a small test in Arizona in 2017 and expanded to 300 locations in seven states earlier this year. By January 2020, it should be in 1,000 stores -- perfect timing just ahead of the Super Bowl in February. 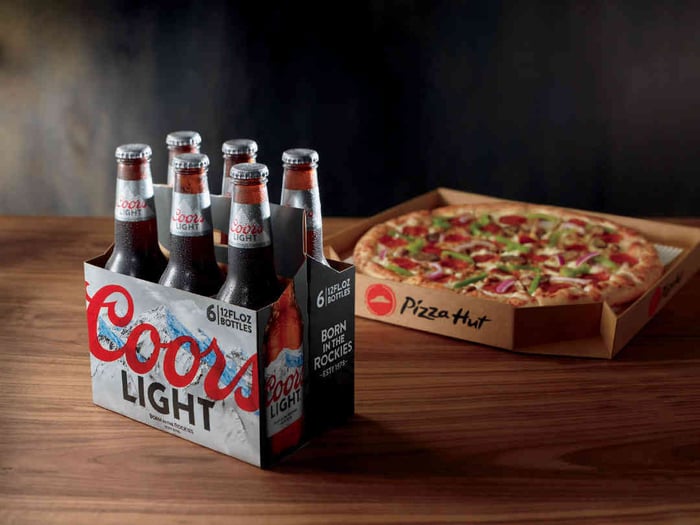 Eating on the go

There are 7,500 Pizza Huts in the U.S., but changes in dining preferences mean people aren't eating at the restaurants as often. Data from the National Restaurant Association indicates 60% of all restaurant transactions are off-premises, whether via the drive-thru window, takeout, or delivery.

It noted, "Today's consumers' on-the-go lifestyles and need for convenience are driving increased off-premises usage across all formats."

Pizza Hut has finally recognized the change. In a bid to make itself a bit more like rival Domino's (DPZ -0.87%), which is almost wholly an off-premises operation, the Yum! Brands chain is converting many of its dine-in restaurants to a carryout/delivery format. It will remodel 500 over the next two years, or around 8% of its base.

Store expansion will be slowed while the conversion is underway, and it's likely more of the new stores it does open will fit this format. The benefit is that because such locations are smaller, they're cheaper to develop and can be in areas where larger restaurants might not be appropriate.

It brings the store much closer to where the customer is, a key feature of Domino's "fortressing" plan, which is to load up an area with its pizza shops, even if it cuts into sales at its existing restaurants. The idea is that overall sales will grow even if individual operators see declines.

That might sound like a sketchy strategy, particularly from franchisees' perspective. But offering a better benefit from ordering from your restaurant -- say, by making beer available -- looks like a better long-term strategy. Many Pizza Huts already have a liquor license (only those that have one can participate in the program).

The original pilot program offered only Anheuser-Busch InBev (BUD -1.00%) brands, including Budweiser, Bud Light, Shock Top, as well as a local craft beer. Pizza Hut subsequently expanded it to include beer from Molson Coors' (TAP 2.19%) MillerCoors division, which supported the pilot with advertising. The response was overwhelming, from consumers and franchisees.

Wanda Williams, Pizza Hut's vice president for operations, told the MillerCoors blog: "When we look at the amount of new customers and incremental sales from beer delivery sales, we can say all have grown at a significant rate. It's a huge initiative for us."

The beer delivery expansion would be timed perfectly for the Super Bowl. Pizza Hut scored a big coup when it replaced Papa John's as the NFL's official pizza sponsor. Chicken wings and pizza are two of the most-ordered items during the game, and Pizza Hut offers both through its WingStreet business.

Yum! Brands has been working to build up Pizza Hut again after a two-decade decline in market share from 25% to 14% between 1995 and 2016. It has since stabilized the business and comparable-store sales are up 1% year to date and 2% in the second quarter, improving on the flat comps in 2018.

Although state and local laws limit where it can offer beer delivery, there are 22 states that allow it, and it represents a smart way for Yum! Brands to grow Pizza Hut sales further.